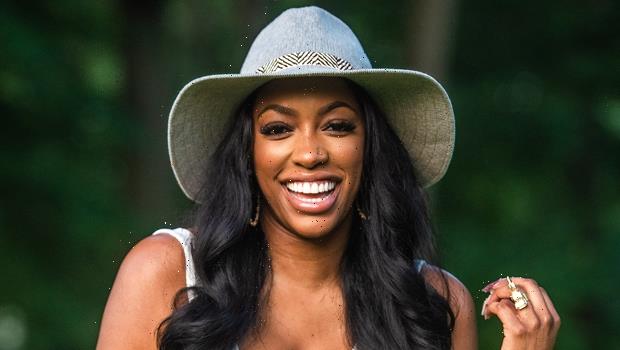 After fans pointed out the similarities between Porsha Williams and Falynn Guobadia’s engagement rings, Porsha is setting the record straight!

Porsha Williams debuted a massive, emerald-cut engagement ring on her left hand after getting engaged to Simon Guobadia — and some fans think the rock is the SAME one he previously gave to his ex, Falynn Guobadia! Before splitting from Simon earlier this year, Falynn was also wearing a stunning, emerald-cut ring, but Porsha insists that they are not one in the same. “That’s a lie,” she wrote on Twitter, when one fan claimed that she was now wearing Falynn’s old ring.

Falynn appeared on the most recent season of Real Housewives of Atlanta with Porsha, but she and Simon broke up in January, after filming was complete. They confirmed their split at the end of April, just two weeks before Porsha and Simon shared that they would be spending the rest of their lives together. Porsha insisted that she and Simon had only been together for one month at the time of their engagement, and made it clear that she had nothing to do with her fiance’s previous breakup.

“I get the optics, but Simon filed for divorce from a previous marriage in January,” she wrote on Instagram. “I had nothing to do with their divorce filing. That’s between the two of them. Falynn and I are not friends and Simon’s divorce has been settled. Our relationship is a positive, loving step forward in everybody’s lives.” This is Porsha’s third engagement — she was previously married to Kordell Stewart from 2011 until 2013, and she was engaged to Dennis McKinley, who she shares a two-year-old daughter with, from the fall of 2018 until mid-2020.

In her engagement announcement post, Porsha acknowledged that she knows she’s moving “fast” with Simon, but insisted that they are “crazy in love.” She added, “He makes me happy and to me, that is what matters most.”

As for Porsha’s ring, it appears that Simon spared no expense when it came to giving his lady some pricey bling! “Porsha’s massive diamond ring appears to be 15 carats,” Mike Fried, CEO of The Diamond Pro, tells HollywoodLife EXCLUSIVELY. “Finding an emerald cut diamond of this size and quality is rare, making the ring’s approximate value $1 million. With the pave band and four-prong setting, her ring is a true statement piece and is a nod to the couple’s future together.”