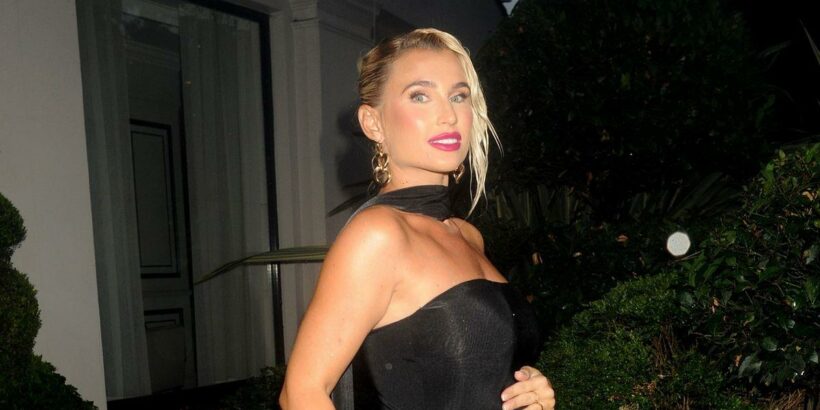 Billie Shepherd made a glamorous appearance with her baby bump as she attended the 2022 Licensing Awards in London on Tuesday night.

The 32 year old, who is currently expecting her third child with her husband Greg Shepherd, looked stunning as she arrived at Grovsenor House where the awards were held wearing a figure-hugging black gown that accentuated her blossoming bump.

The pregnant star stroked her growing tummy as she posed for pictures at the event, and wore her blonde hair in a chic updo with a sweeping fringe as she sported bright pink lipstick with rosy blush.

Billie certainly made a statement in her floor-length gown, as it had a matching scarf that draped across her neck, trailing behind her.

The former TOWIE star brought extra glamour to her evening look as she accessorised with a large sparkly black YSL clutch and a pair of gold dangly earrings and wore black strappy heels.

Billie won an award for her George at ASDA Children’s Collection at the awards event, and was accompanied by her manager Xanthe Biggs, who stood out wearing a bright pink suit with feather cuffs and a pair of gold heeled sandals.

Last month, Billie spoke to OK! about feeling “excited” ahead of her third child’s arrival later this year.

The expectant star discussed how she had a feeling she was pregnant before finding out, as she said: “My boobs were swollen, I felt a bit sicky, and I remember being at a party at my friend’s house and I had a sip of prosecco and just didn’t fancy it.

“So, we bought a pregnancy test while we were out shopping.

“I was really nervous because a positive pregnancy test is life changing. It’s quite overwhelming. So, it was doing that flashing, flashing, flashing for ages then it popped up ‘pregnant’ and was 3 weeks+. We were like, ‘Oh my god!’ We were so excited.”

It’s quite a busy time for Billie to be pregnant with another child, as she and husband Greg, 37, are currently overseeing renovations at the £1.4 million Essex mansion.

The pair began the giant task back when they purchased the home in January 2021.

Billie said her sister Sam Faiers and mum Suzie were in “shock” when she told them she was pregnant, considering preparations for the big move.

“I think they thought I would wait until I moved into our new house and then do it,” she explained, before adding jokingly: “That might have been the sensible option.”