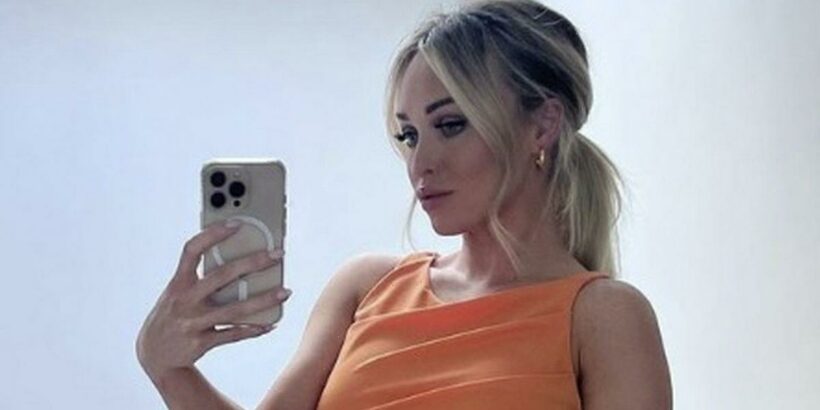 Hollyoaks star Jorgie Porter looked radiant over the weekend as she shared a new snap of her growing baby bump.

The actress, 34, posted a mirror selfie in which she was wearing an orange two piece, made up of a crop top and a floor length wrapped skirt.

She teamed her stylish outfit with a pair of white heeled sandals and then accessorised with gold earrings.

Jorgie styled her blonde locks in a low ponytail and the soap star donned a glamorous makeup look.

She captioned the snap with: "Engagement party ready."

Many of her 716,000 followers flocked to the comments section to gush over the pregnant actress. One fan wrote: "How can you look even more beautiful pregnant? So much love for this picture."

Another said: "Have a wonderful night you look fabulous."

A third penned: "Gorgeous Momma To Be." Jorgie announced in June that she and her fiancé Ollie are expecting a baby together after the couple tragically lost quadruplets 14 weeks into the pregnancy in November 2021.

Speaking exclusively to OK! last month, the actress discussed her pregnancy and announcement, saying: "I've been keeping it in, a secret, the whole time, and now… finally!" Talking about whether it was difficult to keep it a secret while filming, Jorgie admitted: "Yeah, obviously my outfits for Theresa are not pregnant friendly, hiding them anyway, so yeah it's good to reveal it."

The soap star also joked that she's been doing her "best acting" by hiding her pregnancy while filming.

Jorgie said: "I think, honestly, I've been doing my best acting just hiding it and pretending I've been okay, which you know, is kind of a bit like… ah, annoying, as you just want to be like: 'Guys, hug me!'"

The actress has also sweetly been supported by her on-screen family on Hollyoaks, saying: "I see them everyday so they're just there all the time!"

Jorgie revealed her baby news last month in an adorable TikTok video, which she also posted to her Instagram followers.

In the clip, Ollie's hands could be seen placed tenderly on top of his wife-to-be's, and in a clever move, he then removed them to show Jorgie's underneath, followed by their dog's paws.