Can a British royal prince be “canceled” in today’s modern cancel culture? Yes, he can, more or less, especially if he’s doing it himself and with Queen Elizabeth II’s approval.

Prince Andrew, 59, the queen’s second son, announced Wednesday he’s stepping away from his royal duties “for the foreseeable future” due to continuing controversy over his former friendship with convicted American sex-offender Jeffrey Epstein.

Assuming this becomes permanent, it means Andrew is retiring from public life decades earlier than his father, Prince Philip, 98, who only retired in 2017, tweeted longtime royal commentator Victoria Arbiter.

“Prince Andrew is ‘stepping down’ in response to a wave of self-induced scandal & poor choices but it’s extraordinary to think he’s effectively retiring from royal life 37 years before his father did,” Arbiter posted on Twitter. 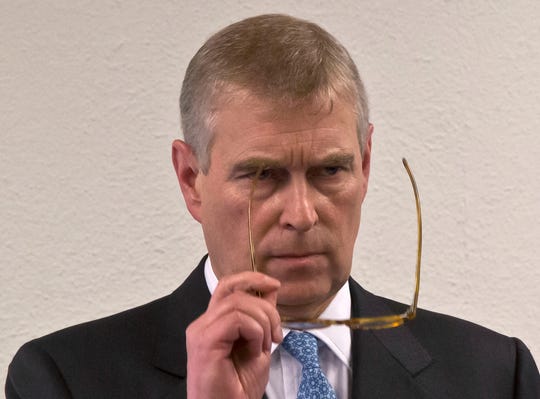 Prince Andrew in January 2015 prior to his speech to business leaders at World Economic Forum in Davos. (Photo: Michel Euler, AP)

Will this be enough to quell the furies railing against Andrew in the wake of his car-wreck BBC interview in which he attempted to explain why he remained friends with Epstein long after Epstein pleaded guilty to sex crimes in Florida in 2008?

And will Virginia Roberts Giuffre, the woman who says she was forced by Epstein to have sex with Andrew when she was 17, be satisfied with Andrew’s disappearance from his public royal life?

It’s not entirely clear yet but recent history in the post-#MeToo era suggests the answer to those questions is probably no.

Andrew continues to deny he had sex or any relationship with Giuffre. He said he doesn’t remember even meeting her, despite a picture of the two, he with his arm around her waist, that has been floating around the internet since at least 2011.

Certainly there is not much precedent, at least not in the modern era, for what Andrew has done here: It’s a rare acknowledgement that a high-ranking royal’s behavior warrants at least temporary suspension of royal duties and a split from his patronage of charities and other royal good works.

It’s also a humiliating acknowledgment by Andrew of his failed attempt to plausibly explain and exonerate himself through the media. If he thought his BBC interview would fix his Epstein mess, he was wrong, or at least wrong about his media skills.

‘I am with him’:  Sarah Ferguson defends Prince Andrew amid Jeffrey Epstein scandal

Andrew’s BBC interview:  Prince says he has ‘no recollection’ of photo with Jeffrey Epstein accuser

Queen Elizabeth II with Sir David Attenborough after she presented him with the 2019 Chatham House Prize at the Royal institute of International Affairs in London on Nov. 20, 2019. (Photo: Eddie Mulholland, AP)

Instead, it made things worse, judging from the near universal blowback of contempt aimed at him by the British media and by Epstein accusers in the U.S. in the wake of the BBC broadcast Saturday night.

Two sentences in Andrew’s statement suggest he or his palace media team have listened to the outrage from his accusers and their lawyers, who denounced him for not seeming to show any sympathy for the women who say they were trafficked for sex by Epstein to his powerful pals. (Epstein was found dead, a suicide, in July in his federal jail cell in Manhattan while awaiting trial on new sex-crime charges.)

“His suicide has left many unanswered questions, particularly for his victims, and I deeply sympathize with everyone who has been affected and wants some form of closure,” Andrew’s statement said. “I can only hope that, in time, they will be able to rebuild their lives.”

The last sentence in his statement is notable for its vagueness: “Of course, I am willing to help any appropriate law enforcement agency with their investigations, if required.”

What does this mean? That he will cooperate with FBI investigators now probing Epstein’s alleged associates in sex trafficking? Or will he do so only if his lawyers tell him to, as he suggested in the BBC interview? Or only under subpoena? And from whom?

Meanwhile, Giuffre and her lawyers have demanded that Andrew cooperate with investigators. She also has publicly called for Andrew to “go to jail.”

After the BBC interview, Gloria Allred, who represents other accusers of Epstein who are suing his estate for compensation, publicly demanded he speak to American investigators.

Nevertheless, the last four days of unrelenting criticism of Andrew by the British media have had the effect of banishment from the spotlight. He’s still a royal prince; he can’t resign from his family. He is still scheduled to give away his elder daughter, Princess Beatrice, at her wedding next year.

Will he be banished from the United Kingdom? Unlikely. He’s not an abdicated king in exile, as was his great uncle, Edward VIII-turned-Duke of Windsor, in 1936. Andrew is only eighth in line to the throne so he will never be king.

More likely, he will spend more time at his royal digs on the Windsor Castle estate, Royal Lodge, or at his luxury ski chalet in Switzerland.

The queen is no doubt dismayed about Andrew, to whom she is close. But will this have any effect on the queen’s carrying out of her royal duties? Also unlikely, as the 93-year-old monarch has weathered plenty of scandals in her 67 years on the throne.

So far, her schedule is unaffected: On Wednesday alone, she conducted two audiences at the palace and gave a speech as she awarded this year’s Chatham House Prize to filmmaker David Attenborough and his “Blue Planet Two” team. Next week she is scheduled to visit the Royal Philatelic Society (stamp collectors) for their 150th anniversary celebration, according to Buckingham Palace.

Will the queen’s other children and grandchildren step up to fill Andrew’s roles in his charities and other projects? Possible, although the palace has not said anything about that yet.

Already, Andrew’s critics in the British tabloids are celebrating his downfall and calling for him to be struck off the royal payroll.

Andrew’s Epstein reckoning has been a long time coming. His friendship with Epstein began damaging Andrew as early as 2011, years after Epstein was convicted. It led to Andrew losing his royal “job” of representing Britain as an international trade envoy, a job he liked.

Andrew’s royal duties included his flagship [email protected], which he founded in 2014 to provide a platform to “amplify and accelerate the work of entrepreneurs,” inviting them to Buckingham Palace to meet “people who could help make their business dreams a reality,” according to the website.

But the disastrous BBC interview sent some of his charitable partners and some educational institutions rushing to distance themselves from him.

Standard Chartered bank, a backer of [email protected], decided not to renew its sponsorship for “commercial reasons.’’ Professional services provider KPMG won’t renew its support for the initiative either, Britain’s Press Association reported. Pharmaceutical giant AstraZeneca says it is reviewing its three-year partnership, which is due to expire at the end of the year.

Like most royals, Andrew is a patron for dozens of organizations, and a few of the more prominent groups have acknowledged they are considering whether they want that bond to continue, including London Metropolitan University. Students at the University of Huddersfield, where Andrew is chancellor, are objecting to being “represented by a man with ties to organized child sexual exploitation and assault,’’ according to The Associated Press.

It’s a royal mess. It’s been so for nearly a decade and so it remains.