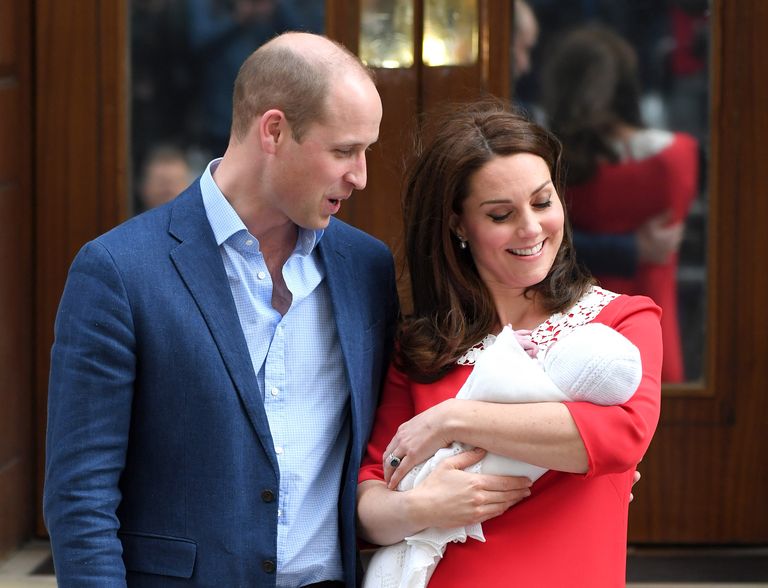 Kensington Palace has released the first official portraits of Prince William and Kate Middleton’s third child, Prince Louis, along with a message from them both thanking the British public “for their kind messages” following his birth on April 23rd. He’s camera ready less than two weeks after his birth — should we expect anything less from the royals, really?!

‪The Duke and Duchess of Cambridge are very pleased to share two photographs of Princess Charlotte and Prince Louis, taken by The Duchess at Kensington Palace.‬ ‪This image of Prince Louis was taken by The Duchess of Cambridge at Kensington Palace on 26th April.‬ ‪The Duke and Duchess would like to thank members of the public for their kind messages following the birth of Prince Louis, and for Princess Charlotte’s third birthday.‬

As above, the first photo shows baby Louis doing his baby thing in some very crisp and very clean white knitwear. A second shot features him getting a big kiss from his big sister Princess Charlotte — this shot apparently taken on Charlotte’s third birthday earlier this week, in lieu of new photos of her (which were not released on May 2nd, to some consternation):

Prince George does not feature in the shots, because he’s been there, done that before of course.

We're delighted to share the first photo of Prince George with his little sister Princess Charlotte. #WelcomeToTheFamily This photograph is the first of four official photographs being released today, taken by The Duchess of Cambridge in mid-May.

Prince George and Princess Charlotte together at home. #WelcomeToTheFamily Photograph copyright of HRH The Duchess of Cambridge / @kensingtonroyal

That said, the cardigan Charlotte is wearing for her photo with Louis appears to be the same one George wore in a photo to mark his great-grandmother Queen Elizabeth’s 90th birthday back in 2016. Knitwear, it’s always a solid investment!

The Queen surrounded by her two youngest grandchildren and her five great-grandchildren #Queenat90 This is the first in a series of official photographs released today to mark The Queen's 90th birthday. They were taken at Windsor Castle just after Easter by renowned portrait photographer Annie Leibovitz. From left: James, Viscount Severn, Lady Louise, Mia Tindell, Queen Elizabeth, Princess Charlotte, Savannah Phillips, Prince George and Isla Phillips.

As has been the case with many photos of the royal children, their mom KMid served as the photographer for these new pictures. Don’t expect much more face time from Louis in the near future though — while his older siblings will almost certainly both feature in Prince Harry and Meghan Markle’s upcoming wedding, he’ll have the day off.