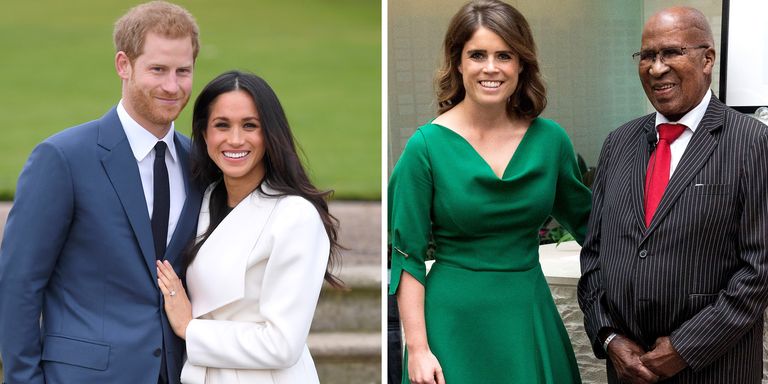 Princess Eugenie is the latest royal to have a twinning moment with Meghan Markle. The bride-to-be (who ties the knot to fiancé Jack Brooksbank in October), stepped out in London last night, wearing the same shoes that the Duchess of Sussex wore in her post-engagement photoshoot, People points out.

The footwear of choice is a nude Aquazzura crisscross suede pump, which paired nicely with both royals’ outfits. Markle wore a white coat by Canadian brand LINE and a forest green dress by P.A.R.O.S.H. for her photo call with Prince Harry at Kensington Palace’s Sunken Garden, which took place hours after they announced their engagement.

Eugenie also channeled green in her emerald tea-length frock and a beige handbag. She stepped out for an even honoring Nelson Mandela’s 100th birthday.

Markle is a fan of the Italian brand; she frequents their designs for royal events, including her wedding day. She wore a white satin version of the pumps with her Stella McCartney dress for the evening reception at Frogmore House, People reports. Even Princess Charlotte wore the label with her mary janes at the royal wedding.

In addition to sharing a taste in shoes, Meghan and Eugenie will have matching details at their wedding. Eugenie is getting married on October 12, nearly five months after Meghan and Harry’s royal wedding. She’ll tie the knot at the same wedding venue: St. George’s Chapel at Windsor Castle. Like Harry and Megan, she and Jack will also invite 1,200 members of the public to experience the ceremony from castle grounds.

Two royal weddings are better than one!