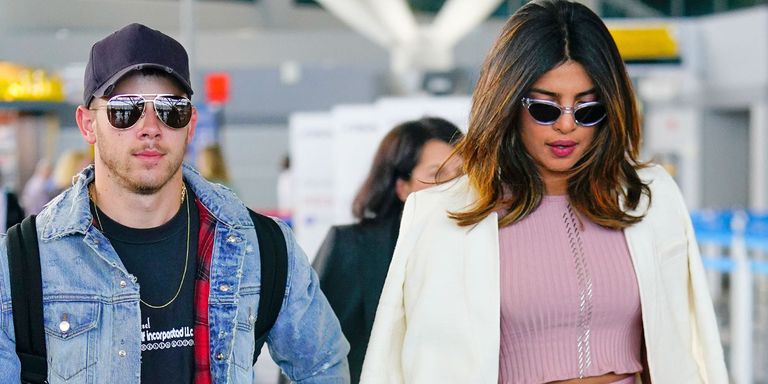 After a week of conspicuous flirting on Instagram, Nick Jonas and Priyanka Chopra fueled dating rumors IRL with a joint appearance at JFK airport in New York.

The Quantico actress tapped into her chic wardrobe to catch a flight, wearing a pink knit crop top, matching trousers, white heeled mules, a cream blazer, cat eye sunglasses, and a Tod’s snakeskin satchel. Her singer beau, on the other hand, kept it casual in a ripped denim jacket, black tee, jeans, sneakers, and a baseball cap.

It’s unknown where the duo is flying to, but here’s to hoping they’re headed for a couple’s vacation.

Despite the mounting evidence of their possible romance, Chopra and Jonas have not yet directly addressed their relationship status. But according to insiders, the two reportedly stayed in touch after hitting it off last year, but things have especially heated up in the past few weeks.

“They’re flirtatious and have been hanging out and text all the time,” a source told People, but the couple is still keeping it “casual.”

Chopra and Jonas were previously photographed out together in West Hollywood last Thursday, where they were spotted headed on a dinner date at Toca Madera. The pair had a PDA-filled evening, according to onlookers. “Priyanka ran her hands through his hair at one point and they were laughing and even dancing to the music,” one source told People.

In the days following, Chopra and Jonas got fans riled up after leaving flirty comments on each other’s Instagrams. Most recently, the actress wrote “Who is cuter?” on her rumored beau’s photo with a koala.

From the way it’s looking, it probably won’t be long until we get another hint at their rumored romance on Instagram again.