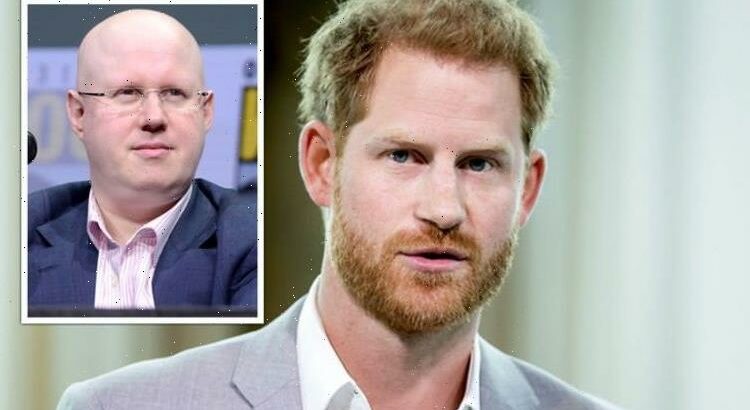 Prince Harry on taking part in the Warrior Games

Prince Harry was inundated with tributes from the Royal Family as he celebrated his 37th birthday. However, Matt Lucas, 47, took a cheeky swipe at the Duke of Sussex today.

Taking to Twitter, the Great British Bake Off star joked that Prince Harry was most likely “meditating under a tree” to mark the celebratory occasion.

His remark comes after the comedian complained the bells at Windsor had been ringing for quite some time to mark the occasion.

Taking to the micro-blogging site, Matt couldn’t resist a cheeky dig at the royal, who resides in the United States with his wife Meghan Markle.

In view of his 1.2 million followers, he penned: “The bells at Windsor have been ringing for about half an hour, presumably because it’s Prince Harry’s birthday.

“Well he’s in America probably meditating under a tree or something so hopefully someone will get the message and stop soon because I can’t hear the telly.”

Fans soon flocked to comment on the post, as Georgia typed: “Maybe it’s a ring for every year of his life. Half an hour? Blimey, how old is he?”

Terri noted: “I just left Royal Holloway having dropped my son at university. Did wonder what the bells were! Thanks for the info.”(sic)

“Or maybe they’re just REALLY excited that Bake Off is back in under a week?” Mighty Pea quipped.

Meanwhile, the Queen has led tributes to celebrate Harry’s birthday.

In a message posted to Twitter, the Royal Family said: “Wishing The Duke of Sussex a happy birthday today!”

The heartwarming post was accompanied by a series of photos of the royal on various projects he undertook while he was a working member of the Royal Family.

The Duke and Duchess of Cambridge posted a separate message, alongside a picture of Harry smiling.

“Happy birthday Prince Harry!” they penned on the micro-blogging site.

Prince Charles and his wife, the Duchess of Cornwall, also honoured his youngest son in a heartfelt birthday message.

They wrote: “Wishing The Duke of Sussex a very Happy Birthday today!”

Harry now lives in Montecito with his partner Meghan and the couple’s two children, Archie and Lilibet.

Harry and Meghan stepped down from their roles as senior royals last year.

He has not yet announced how he plans to celebrate his birthday – though it is tradition for royals to celebrate their birthdays with a charitable donation.

The Duchess of Sussex turned 40 last month and launched a new initiative to help women who had lost work during the pandemic get back into employment.

Meanwhile, Harry and Meghan have said they are “humbled” as the couple are the cover stars of Time magazine’s 2021 list of the 100 most influential people on the planet.