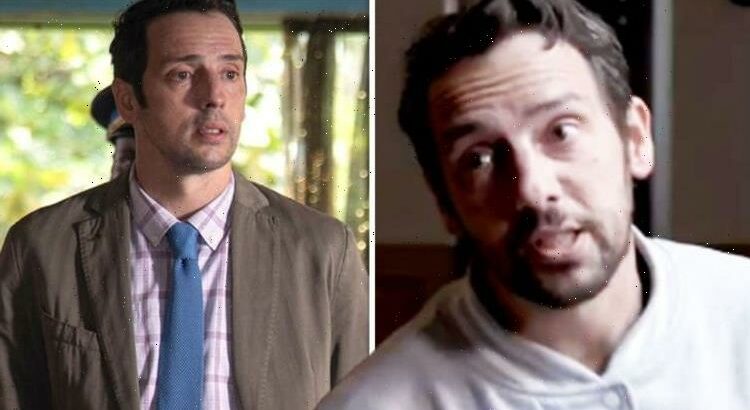 Death In Paradise actor Ralf Little, 41, has revealed he suffered a horror moment while filming Two Pints of Lager and a Packet of Crisps. The star spoke out on the incident with his friend and Two Pints co-star Will Mellor in videos posted on Instagram.

Ralf admitted he and the rest of the cast and crew were warned against playing darts on set while they were filming scenes in the pub for the BBC sitcom.

However, Ralf and some of his co-stars ignored the warnings and decided to go ahead and enjoy a game during a break from filming.

Ralf then showed off his dart moves to Will before revealing how the game went very wrong.

He added: “It’s gone bang, hit the wire, spiralled – it defied the laws of physics, – it’s hit the wire and gone about eight feet into the air, over the screen, still tumbling, comes down and goes ‘Donk!'”

Discussing the disastrous results of the situation, Will revealed that the dart had hit an extra in the head.

He exclaimed: “It stabbed an extra right in the head!

“It stuck right in his head.”

Ralf continued: “The extra’s like ‘It’s all right don’t worry about it’.

“He was trying to be so polite because he probably didn’t want to lose his job.

“He was one of the regular extras as well!”

Ralf explained that the incident led to darts being banned from the set.

He admitted: “That was the last time we had darts on set.”

Fans took to the comments section of Ralf’s admission to share their thoughts on the shocking story.

One person wrote: “This was a great story and a joy to watch.”

Another added: “I’m dead. I want to be a part of your game night group.”

A third penned: “Wonder where that extra is now love Darts, I even have 2 trophies from playing in a Ladies Logend Darts League for my old pub.”(sic)

Elsewhere, Ralf is currently filming the new series of Death In Paradise in Guadeloupe.

The actor has been sharing updates with fans after helping to look after stray puppies on the island.

Ralf recently adopted Dora, who he decided to rescue and take home with him.