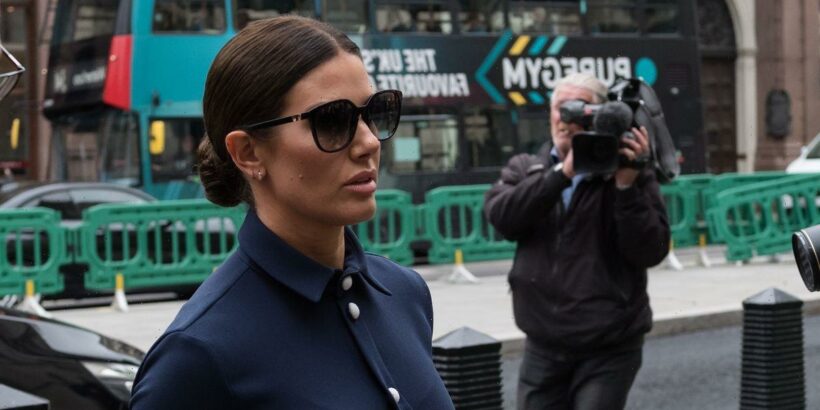 Rebekah Vardy and her family suffered horrific "abuse and threats" after Coleen Rooney claimed her Instagram account leaked private information to the press.

Rebekah, 40, was pregnant at the time of the accusation and her lawyer Hugh Tomlinson QC has now claimed she was told to "die" in hateful comments from trolls, in a written argument submitted to the court.

Jamie Vardy's wife is now suing Coleen, 36, for libel in a seven day long trial at the High Court in Central London as she denies leaking information about Coleen to the press.

Wayne Rooney's wife was dubbed "Wagatha Christie" after she made the allegations, which she said followed a months-long "sting operation" to discover who had been leaking stories from her private Instagram account to The Sun newspaper.

Rebekah's barrister Hugh Tomlinson QC submitted a number of hateful comments Rebekah received from trolls in the wake on the allegations in a written argument.

An example of an abusive comment provided by Mr Tomlinson read: "Yo snitch I hope your baby gets put in a microwave and ur husband s**gs some other bird other than snake valley".

Another example read: "You fat ugly rat I genuinely hope you and your baby rot and die an extremely painful death for what you have done…"

Mr Tomlinson also claimed Rebekah's husband Jamie Vardy had been subjected to chants about her at football matches, where football fans could be heard saying: "Jame Vardy, your bird's a grass!"

Rebekah was seven months pregnant at the time the post was made by Coleen.

In his skeleton argument, Mr Tomlinson wrote: "As a result of the post, Mrs Vardy and her family were subjected to abuse and threats.

"She was jeered and heckled at football matches and was the butt of endless jokes and further accusations.

"But the allegation in the post was and remains false: Mrs Vardy had not leaked information about Mrs Rooney or her friends and family to The Sun newspaper from her private Insatgram account."

Mr Tomlinson added that Rebekah would be seeking "substantial damages" over the impact the post has had on her life.

Rebekah's barrister also said in written arguments the I'm A Celeb star had "no choice but to bring this libel action to establish her innocence and vindicate her reputation".

He added: "Mrs Rooney did not have the ‘irrefutable’ evidence that she claimed to have had: her so-called ‘careful investigation’ was nothing of the sort.

"If anyone had been leaking information from Mrs Rooney’s private Instagram this was not done with Mrs Vardy’s knowledge or approval."

For all your updates on Rebekah Vardy and Coleen Rooney, sign up to our daily OK! newsletter.