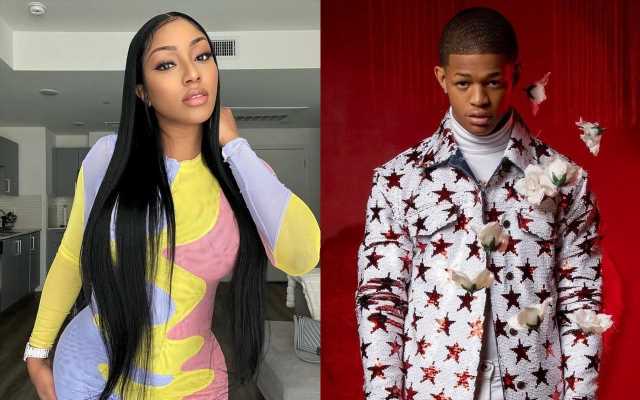 The nature of the ‘Worth It’ singer and the reality star’s relationship remains to be seen, but the pair were photographed cozying up to one another back in October 2020.

AceShowbiz –YK Osiris is going to be a father for the second time. If a new report is to be believed, the “Worth It” singer is currently expecting a child with former “Love & Hip Hop: Hollywood” cast member Nastassia Thomas a.k.a. Stassia.

The rumors first emerged after Stassia shared on Instagram a photo of her showing off her baby bump. In the accompaniment of the post, she simply gushed, “9 months[white heart emoji].”

A number of Stassia’s famous pals have since left gushing comments on her post. One in particular was Chanel West Coast, who sent out raising hands, fire and white heart emojis. As for Yasmine Lopez, she replied with a series of heart-eyed emojis. Kanye West’s girlfriend Chaney Jones, meanwhile, raved, “Sooo beautiful.”

A source confirmed to The Shade Room that Stassia is currently pregnant with YK’s baby. Unfortunately, the report didn’t sit well with some online users considering their age gap.

According to Famous Birthdays, the former VH1 personality was born September 5, 1983, meaning she’s currently 38 years old. As for the musician, he was born on September 7, 1998, and is 23 years old.

The nature of YK and Stassia’s relationship remains to be seen. The two, however, were spotted cozying up to one another back in October 2020. In one photo, the Instagram model was seen hugging her rumored boyfriend from behind. Another image, meanwhile, showed the two locking lips as he rode a horse by the beach.

Both YK and Stassia have yet to react to the pregnancy report. The Leave Me On Read crooner himself is already a father to a toddler son named Kingston. In January, he shared on Instagram a video of him and the young boy walking side-by-side in the airport. He captioned the footage, “Like father, like son.”