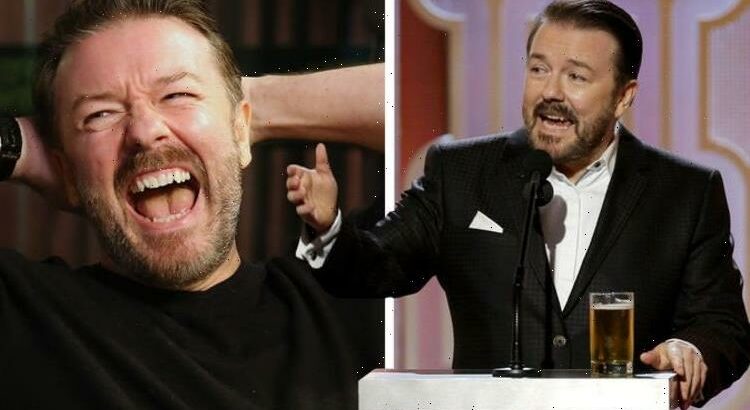 Ricky Gervais, 60, is no stranger to award shows, having hosted the Golden Globes five times over the past decade. Now, a new poll has suggested that he might have been the new master of the Emmy Awards, but the comedian himself had something to say about it.

With this years’ Emmys being broadcast in September, CBS and the TV Academy announced on Monday that Cedric the Entertainer will make his hosting debut as the show returns to a live, in-person format following the virtual ceremony last year.

While Cedric is a newbie to the hosting scene, a poll was sent out to viewers and it looked like it was a landslide for Ricky.

But the comedian made it very clear he would not be taking the baton if it was ever offered to him.

In true Ricky fashion, he penned a fitting response on Twitter after coming across the poll results.

“F**k that!” he exclaimed alongside a laughing face.

It comes after he revealed that he’s never “understood the controversy” surrounding his past hosting jobs, but he won’t apologise for his jokes.

The comedian, who’s been criticised by some for being “mean-spirited” while hosting, was replaced by Tiny Fey and Amy Poehler in 2021 at the Globes.

He said after his cutthroat attacks against Hollywood’s finest left the audience and viewers stunned: “I don’t think they should have to apologise, but it’s up to them.

“I’ve seen actors say terrible things and then say sorry because they’ve got a film coming out the next day. If you want to do that, that’s fine.

“I don’t do it on principle. I don’t mean I never apologise; that would make me a psychopath. I mean I don’t back down and I don’t try to change history. I evolve.”

He added: “I’m sure I’ve told jokes ten years ago that I wouldn’t tell now because they wouldn’t fly.”

After Ricky’s hilarious reaction to the Emmys poll, fans took to social media to share their thoughts on another potentially brutal monologue coming their way.

Another said: “We NEED Ricky Gervais to blow the lid off everything. Ricky, you’re a national treasure.”

“I only watch the opening only if You do it,” a third commented.

A fourth pleaded: “C’mon man, do it. At least you can make it entertaining.”

While a fifth agreed: “Only reason I’d watch, mate.”

A “limited audience of nominees and their guests” will also be present, according to a press release.

The event will take place at the Microsoft Theatre in Los Angeles on September 19.