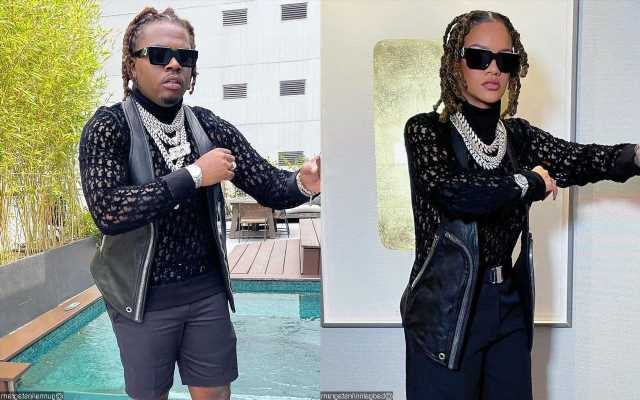 In addition from fans, the ‘Umbrella’ hitmaker gets compliments from her famous pals, including Anderson .Paak, Yung Miami, Addison Rae as well as A$AP Ferg.

AceShowbiz –Rihanna has nailed Gunna‘s viral New York Fashion Week look. While the “Repeat It” rapper was clowned over his style, the “Umbrella” hitmaker earned praises after she recreated his style for Halloween.

On Sunday, October 31, the Barbadian native took to Instagram to give a hint at her outfit for the festivity. Sharing a black-and-white picture of tall Rick Owens boots, she wrote, “the Gunna’z. @gunna.”

Rihanna then treated her fans to some images of her reenacting Gunna’s poses. In the snaps, she could be seen wearing a black, sheer Dior shirt paired with a black vest, shorts, the boots, diamond necklaces and dark sunglasses. “D . S . 4” she wrote in the caption, imitating Gunna’s in his original post.

Rihanna’s post has since been flooded with positive feedback from many. One in particular was Gunna, who exclaimed, “Nawww U OVERLY WON.” Yung Miami then gushed, “Why I’m screaming [several crying laughing emojis] I love you.”

Also praising Rihanna’s style was Anderson .Paak, who raved, “This what I was waiting for.” A$AP Ferg simply commented, “Killed.” Addison Rae, meanwhile, cracked up as she noted, “HHAHAHA.”

The pictures then made their way on Twitter, prompting a fan to marvel, “Rihanna as Gunna the funniest thing I seen today.” Another individual wondered, “How you outgunna Gunna??” Some fans even coined the phrase “Runna” combining Rihanna and Gunna.

” ‘It’s ugly until rihanna decides it’s not’ is such a real phenomenon,” a third fan opined, with someone else tweeting, “Rihanna dressing up as Gunna was all I needed to see today honestly. Happy Halloween y’all.” A different person, meanwhile, claimed that Rihanna “literally wore it better.”

As for Gunna, he continued to celebrate his achievement by reposing Rihanna’s pictures on his own Instagram Stories, calling her “OD.” The “Drip Too Hard” hitmaker also used one of the snaps as his Instagram profile picture.