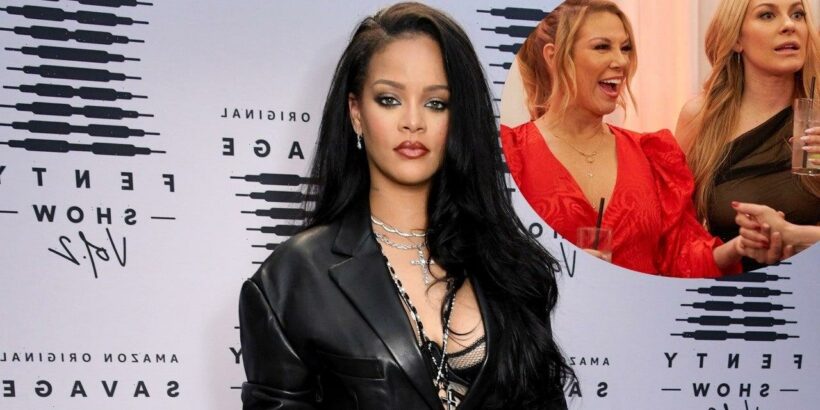 RiRi is getting in on some RHONY drama! Rihanna lent her support to Leah McSweeney following her co-star Ramona Singer’s diss on The Real Housewives of New York City. The 33-year-old Savage X Fenty founder took to social media on Wednesday, modeling a shirt from McSweeney’s Married to the Mob clothing line.

“What was said @ramonasinger ? 😂 #RHONY,” Rihanna captioned the post.

In the pics, RiRi is wearing a black shirt with red writing that reads, “B**ch Mob” from the line. The shirt retails for $30.

Rihanna also shared a clip from RHONY, in which Singer is mocking McSweeney’s clothing line.

“Let me promote ‘Leah Mob’ or ‘Mob something,'” Singer says before McSweeney cuts her off.

“You’re not exactly my demographic, so it’s all good,” she says. “I’ve already got Rihanna wearing my s**t, do you think I need you wearing my s**t?”

McSweeney also commented on Rihanna’s post, writing, “I love you so much 😂❤️🔥.”

The 38-year-old reality star and streetwear designer reposted the image onto her account, writing, “Yup @badgalriri is a woman who supports women @marriedtothemobny And she’s also watching and enjoying #RHONY Season 13 😭❤️‍🔥.”

After one commenter asked if Singer understood that McSweeney and Rihanna were “dragging” her, she replied, “I am not her demographic…well aware of what she is saying 😘 we fight and make up @leahmob 💕.”