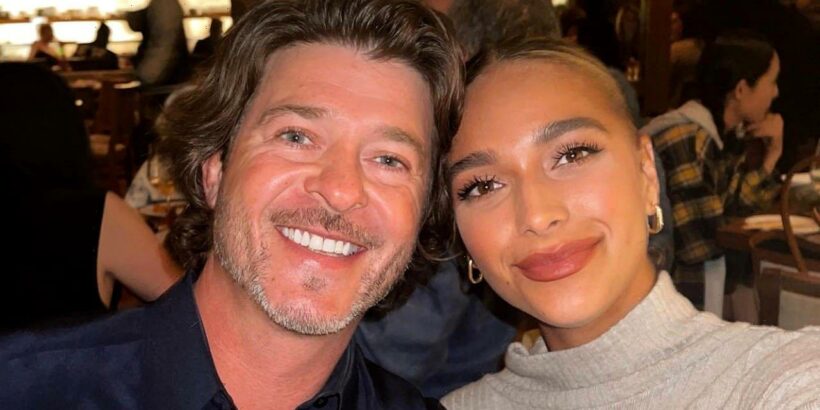 In a Q and A with fans on her Instagram Story, the model says she is not signing a prenup as she confidently claims that the ‘Blurred Lines’ singer is ‘not marrying anyone else after me.’

AceShowbiz –Robin Thicke‘s fiancee April Love Geary doesn’t see the need for a prenup before legalizing her union with the singer. Having gotten engaged to “The Masked Singer” host for more than three years now, the model has made it clear that she won’t be signing a prenup when she’s marrying her longtime partner.

During a Q&A with fans on her Instagram Story on Thursday, March 24, a fan asked the 27-year-old model, “Does Robin want a prenup before marriage?” To this question, the mother of three responded, “I don’t know, but I’m not signing one.”

She then shared the reason behind her decision, confidently saying that “he’s not marrying anyone else after me.” She added, “How do you go from, like, the baddest b***h on the planet? Where do you go from there? Trash.”

Robin and April met in 2014 at a party and went public with their relationship in 2015, after he finalized his divorce from Paula Patton. In February 2018, they welcomed their first child together, a daughter named Mia Love.

In August 2018, April announced that they were expecting their second child together. They got engaged on Christmas Eve of that year and their second child, another daughter named Lola Alain, was born in February 2019. They welcomed their third child, a boy named Luca Patrick, in December 2020.

Robin is also a father to 11-year-old son Julian, whom he shares with his ex-wife Paula.

In March 2021, Robin revealed that he and April are done expanding their family as they’re looking forward to having a big wedding. “We wanted to have a big family, now we’re done,” he told Metro.co.uk. He added, “We did three in a row, we’re outnumbered now so we’re going to have a nice wedding someday and we’re really excited.”