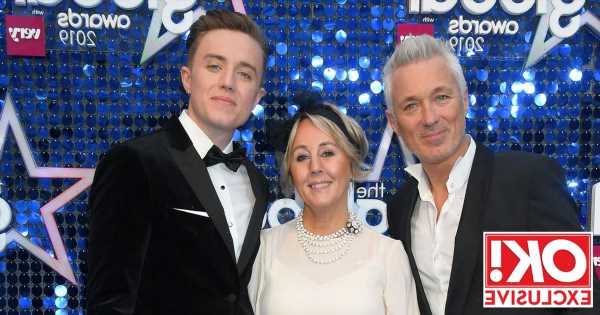 Roman Kemp has opened up on how he's planning to spend Christmas this year as he's hosting the big day for the first time.

The 28 year old, who recently said there's "healthy competition" between himself and dad Martin, spoke out about his festive traditions during an exclusive chat to OK! on Vodafone's ReBoxing Day campaign.

Capital host Roman's parents Martin, 60, and Shirlie Holliman, 59, are currently busy renovating their ninth house together, which means they aren't able to host the big day as they normally would.

With this in mind, the former I'm A Celebrity… Get Me Out Of Here! star has stepped up to take the lead. He told OK!: "Christmas plans are… My parents are spending Christmas with me because obviously they're renovating the house."

Laughing, he added: "They don't have anywhere to go!

"I'm hosting it this year, which is a first and I hope the last. To be honest, for Christmas we're not really too traditional. If someone says, 'Shall we have Chinese?' then everyone kind of goes, 'That's nice, let's do that'.

"It all depends on how everyone is feeling. One year, my sister [Harley Moon Kemp, 32] had sushi for Christmas… My mum said to me yesterday, 'What do you want for Christmas? Do you want Turkey?' All my family are vegetarian other than me…"

When it comes to festive traditions, they only have one that takes place in the build up to the big day. He said: "We have a curry on Christmas eve. I don't know why, it's just what we've always done."

Roman went on to explain that they all get together for this lovely family meal before going their separate ways to have fun and "get drunk".

He shared: "Usually what happens is we'll go for a curry on Christmas eve and then me and my sister will go see our friends.

"So we'll go for this meal and then straight after my parents know we're leaving to get drunk with our friends."

Roman is promoting Vodafone's ReBoxing Day campaign, which encourages everyone to give their old devices, such as smartphones and tablets, to the British Tech Appeal so they can be donated to someone who needs them.

He said: "When I think about digital exclusion, I think of people who don't have the internet and they can't talk to their family and friends. What you forget is all the other stuff, like job applications, education online – all those people who didn't have that, they were lost during the last 18 months.

"So being able to help out those people was quite a nice thing."

All the public need to do is donate their old device and Vodafone will add the connectivity (six months of free data, texts and mins). With the help of its charity partner Barnardo’s, the devices are redistributed to young people and families who need them.

Stay up to date with all the latest on Roman Kemp by signing up to OK!'s daily celebrity newsletter.