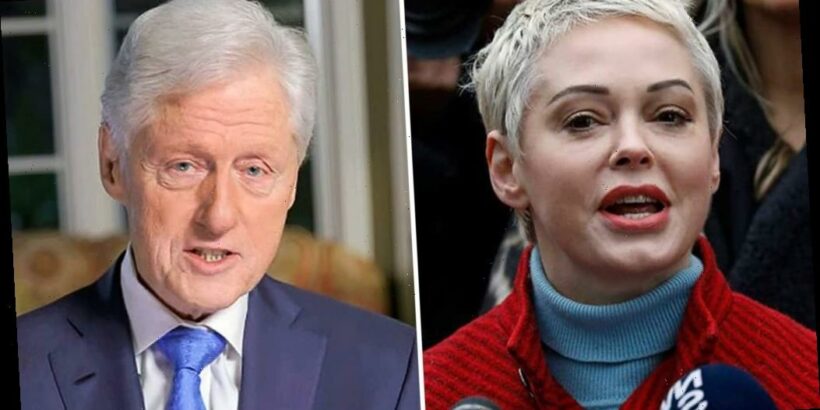 Actress and activist Rose McGowan has called out Twitter for suspending her over a tweet blasting former President Bill Clinton.

McGowan, who criticized Vice President Kamala Harris for appearing alongside the accused sexual predator and other prominent Democrats at a high-profile Clinton Global Initiative summit last week, doubled down on her slam of the event meant to “empower women.”

“If you put your party over principles, over ethics, you are the problem not me,” McGowan tweeted. “You can come for me all you want, I do not care. This is your cult leader. If you aren’t disgusted, go take a long hard look in the mirror & wake the F up.”

She also shared an image of a naked Clinton being massaged by an unidentified woman on a bed, captioning it “Photo taken on Epstein Island.”

That image prompted McGowan’s suspension from Twitter over its non-consensual nudity policy, specifically for “sharing privately produced/distributed intimate media of someone without their express consent.”

“What are you so afraid of, Jack Dorsey? A little freedom of speech? Going against your cronies?” McGowan asked the Twitter CEO in a video shared by RT. “I don’t understand why you support evil, Jack Dorsey. And why you lie.”

McGowan accused Twitter of hypocrisy for allowing pornographic imagery on its platform but punishing her for sharing the Clinton-inspired artwork.

“I was just trying to drive a point home about a disgusting human doing a disgusting thing,” McGowan explained. “I know that Twitter is trying to silence me and I know a lot of powerful Democrats are behind it.”

She claimed that she had been “shadow-banned” ever since Twitter received intense backlash for suspending her after she came forward with allegations against Weinstein back in 2017, saying “that means almost no one can see my tweets” and her followers are never notified about her posts. She added that Dorsey has “personally blocked me.”

She continued, “I’m a lot less dangerous than you think. I am more dangerous if you silence me.

However, when pressed about whether McGowan’s tweet actually violated the policy since the image of Clinton was a piece of art and not “privately produced/distributed intimate media,” the spokesperson declined to comment.