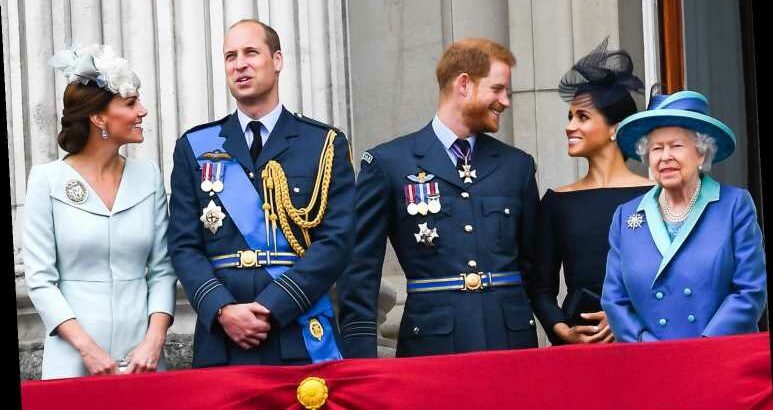 The royal family and their aides have been in crisis talks for much of the last two days as they formulated a response to Meghan Markle and Prince Harry's revealing interview with Oprah Winfrey.

A palace source stresses to PEOPLE that at the "heart of this is a family, and they should be given the opportunity to discuss the issues raised privately, as a family."

"It has been important for us to carefully consider any response before issuing," the source tells PEOPLE. "And of course releasing something today meant viewers in the U.K. had the opportunity to watch the interview, if they wished to, first." On Tuesday, Buckingham Palace released a statement on behalf of Queen Elizabeth.

"The whole family is saddened to learn the full extent of how challenging the last few years have been for Harry and Meghan," the statement said. "The issues raised, particularly that of race, are concerning. While some recollections may vary, they are taken very seriously and will be addressed by the family privately.

It continued, "Harry, Meghan and Archie will always be much loved family members." During the interview, Meghan said she was "silenced" by the institution, adding that she was denied help when she was suffering a mental health crisis and that there were "concerns and conversations about how dark [Archie's] skin might be when he's born" voiced by a member of the royal family. Although they didn't want to name the family member, Oprah said Monday on CBS This Morning that it was not either of Harry's grandparents, Queen Elizabeth or Prince Philip.

RELATED: The Biggest Bombshells from Meghan and Harry's Oprah Interview

With the palace in turmoil over the racism claims made in the interview, the source went on to stress that "diversity, equality, inclusion and mental health are important issues, and highlighting them has formed part of the work of members of the Royal Family for many years." A statement released Feb. 19 by Buckingham Palace confirmed that Prince Harry, 36, and Meghan, 39, won't return as working royals. The announcement came one year and one month after the Duke and Duchess of Sussex shared their plans to step back, which came with a one-year review period.

"Following conversations with The Duke, The Queen has written confirming that in stepping away from the work of The Royal Family it is not possible to continue with the responsibilities and duties that come with a life of public service," the palace statement said.

In response, Prince Harry and Meghan pushed back with a statement that pointedly referenced the Queen's: "We can all live a life of service. Service is universal." Get the premiere issue of PEOPLE Royals for glamorous new photos and inside stories royals fans haven't seen or read elsewhere! Subscribe at peopleroyals.com/launch

Prince Harry and Meghan's office also said that the pair "remain committed to their duty and service to the U.K. and around the world, and have offered their continued support to the organizations they have represented regardless of official role."