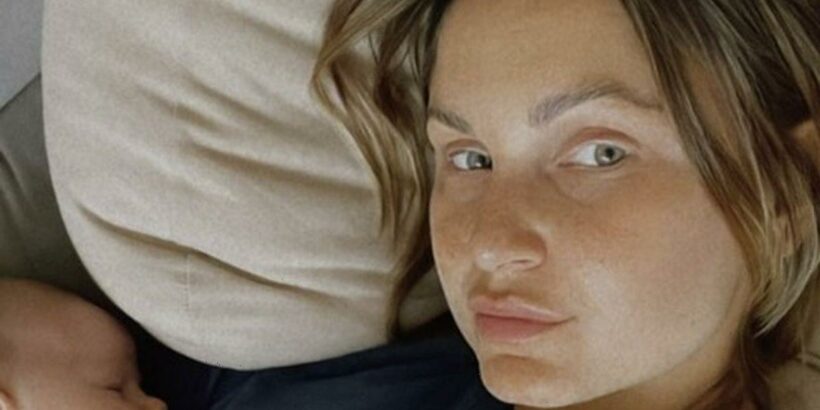 Samantha Faiers has told fans how her new-born son is "keeping me on my toes" and has even pleaded with her baby to "give your mum a break".

The former The Only Way Is Essex star, 31, took to Instagram to give her 2.5 million followers an update on baby Edward after she gave birth in May. Sam posted a photo of herself and her one month old asleep on her chest. She captioned the adorable snap, writing: "Hey guys, sorry I've been a little quiet. Edward has been keeping me on my toes."

The 31 year old then explained the troubles she's been having with her little one, saying: "We actually have a good little night routine going.

"From 11pm we get into bed (I co sleep alone with him) he has a few feeds in the night and settles straight back to sleep after. Great! Happy with that. But the days…jeez.

"After 1/2pm that's it. The baby doesn't sleep and wants to be held the whole time and usually only by me."

Sam finalised her post by joking: "Give your mum a break."

The reality star has previously made light of her struggles as a parent with her taking to Instagram in May to accuse Edward of being a "beautiful little sleep thief".

The mum of three posted a photo of her little tot asleep, along with the caption: "My beautiful little sleep thief.

"Parents with newborns I'm sure you can relate… You have a string of good nights with smooth feeds and little fuss in-between… then out of nowhere they're up all night.

"Literally this morning he was awake from 6.30am until 1.30pm with no nap and after being awake most of the night."

Sam went on to say that they'd ended up having a three hour nap in the middle of the day.

She continued: "It isn't ideal. Still finding our feet and settling in."

Sam and her partner Paul Knightly announced the name of their latest addition via Instagram on June 10, after he was born on May 15.

Along with a sweet photo of Edward wearing a blue baby grow, she wrote: "Edward Knightley. A month ago today you were born at home surrounded by so much love.

"It’s for sure been a game changer for mummy having 3 little Knightley’s, but I wouldn’t change it for the world. I have soaked up every second with you darling, this is just the beginning..

"Whilst it feels like this month has gone really quick, I can’t help but think what an amazing month it’s been. I’ve really taken each day to just rest & be with my little newborn.

"I think I have an extra 5000 new images on my camera role. I couldn’t even think about doing much else than being at home with my family and really taking this time to settle the baby in & just all be together."

She continued: "I still have a way to go yet, this adjustment has been super full on but equally loving every moment. I’m so proud my heart could burst.

"Last thing.. thank you so so much for everyone’s kind messages. I often read through all my DM’s during night feeds so thank you."

For the latest on Sam Faiers, sign up to our daily OK! newsletter.