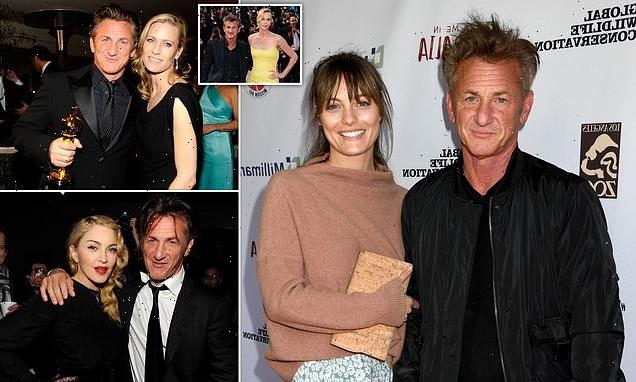 Sean Penn’s wife of just over a year, Leila George has filed for divorce, but no details of what led to the split have been provided at this time.

The 29-year-old Australian actress — who wed Penn, 61, in July 2020 after four years of dating — filed divorce documents on Friday in a Los Angeles County Superior Court, per TMZ.

The divorce will mark Penn’s third.

He was previously married to House Of Cards actress Robin Wright from 1996 to 2010, with whom he shares two children, and his first marriage to Madonna lasted from 1985 to 1989.

Splitsville: Sean Penn’s wife of 15 months Leila George, 29, has filed for divorce. Documents were filed in a Los Angeles County Superior Court on Friday but no reason for the split is known at this time; pictured January 2020

Penn first confirmed he had married George last summer via a civil ceremony over zoom.

He flashed a gold wedding band during a Late Night with Seth Meyers appearance where he told: ‘We did a COVID wedding. By that, I mean it was a county commissioner on Zoom and we were at the house with my two children and her brother, and we did it that way.’

At 29, Leila is only a few months younger than his now 30-year-old daughter Dylan Penn, and only two years older than his son Hopper, 27. 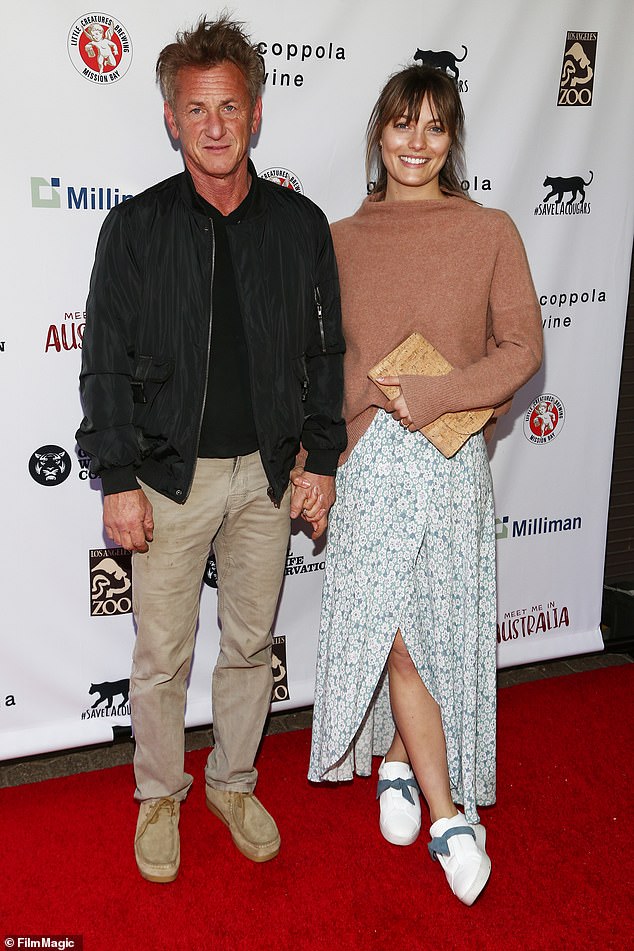 Happier times: The 29-year-old Australian actress wed Penn, 61, in July 2020 in a civil ceremony over Zoom after four years of dating; pictured March 2020 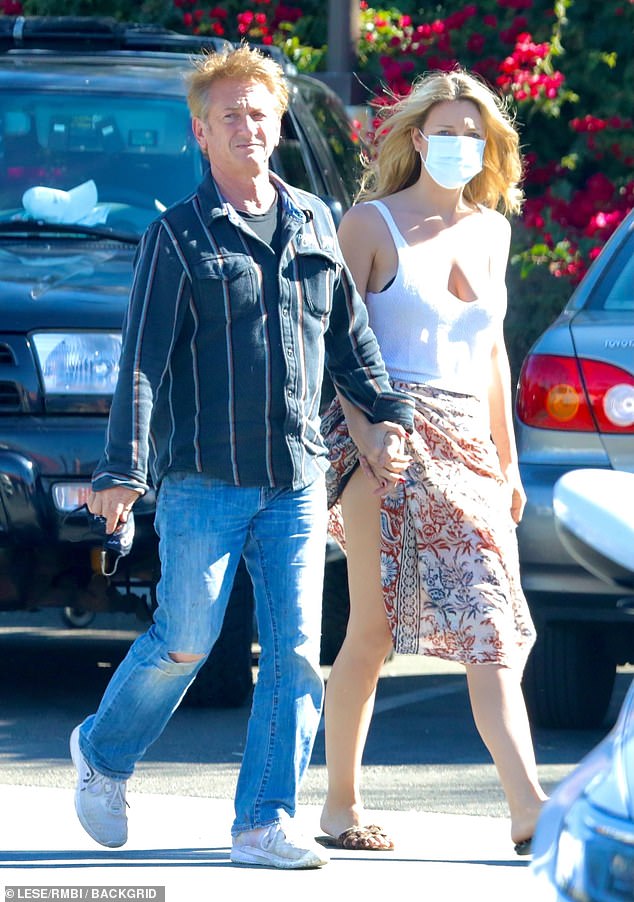 Last public outing: The couple were last seen out together on August 1 as they shopped at a Pavilions supermarket following lunch in Malibu

Though split details are unknown, Sean spent most of August and early September overseas promoting his film Flag Day with his daughter Dylan.

The couple’s last public outing came in August as they went to a grocery store in Malibu, California.

On October 13, The I Am Sam actor was spotted out solo following dinner at Craig’s without his wedding ring.

Sean first met Leila on the set of the movie The Last Face starring Javier Bardem and Charlize Theron and had said that it was love at first sight. 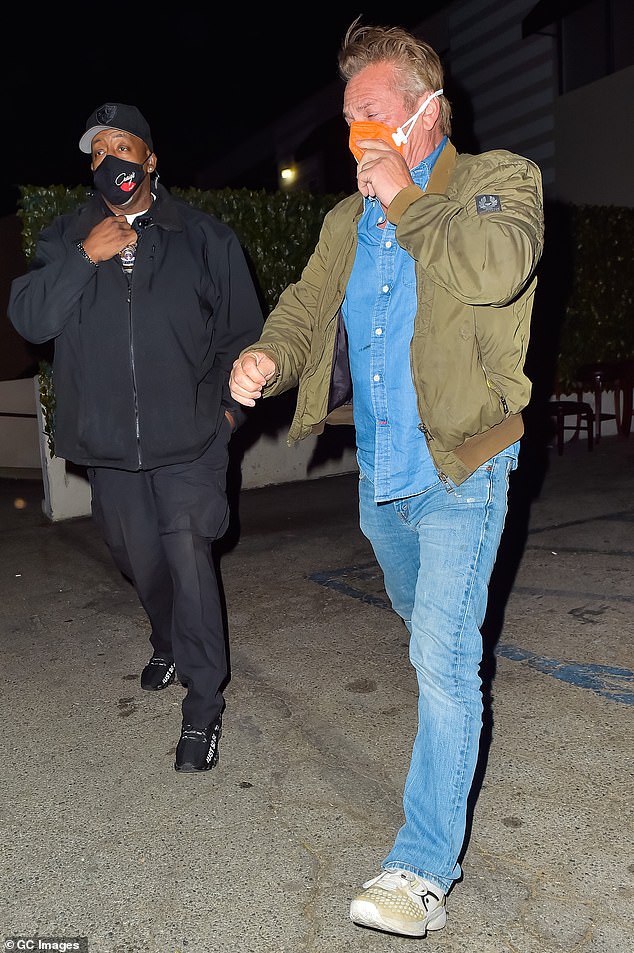 Already over? The I Am Sam actor was most recently spotted out solo on October 13 in Los Angeles without his wedding ring

However the relationship had its ups and downs as a source told PEOPLE in August 2020 that prior to their marriage he had to ‘win her back.’

‘They got together and then they broke up, and Sean won her back,’ said the insider. ‘He realized he had made a mistake and when he felt he might lose her, he worked hard to get her back.’

‘They got back together during COVID and became really close and got engaged a few months ago, early during quarantine.’

Prior to George, Penn had been in a two decade long relationship with Robin Wright and they were married for 14 of them. 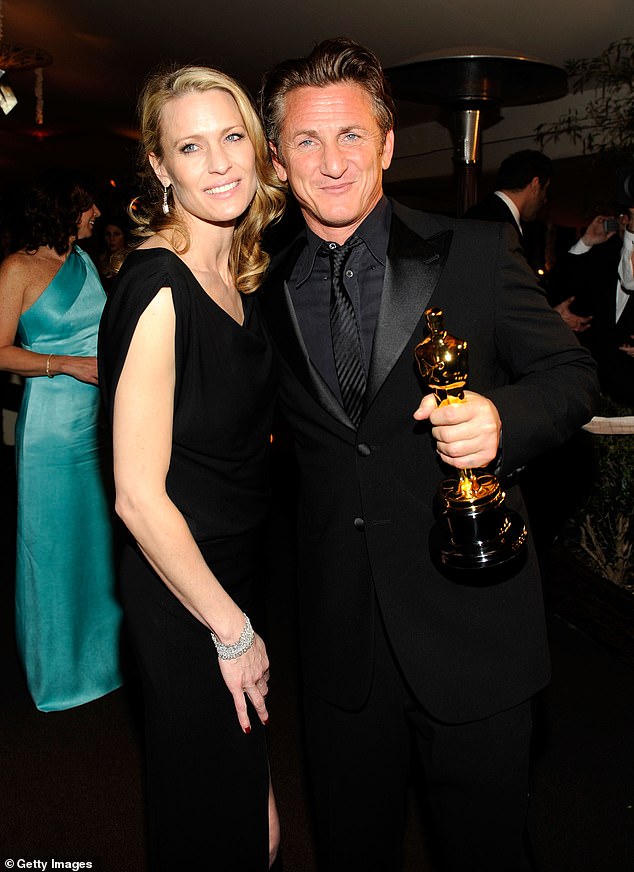 Second marriage: He was previously married to House Of Cards actress Robin Wright from 1996 to 2010 and they took action to divorce and then reconciled numerous times before she filed in August 2009; pictured February 2009 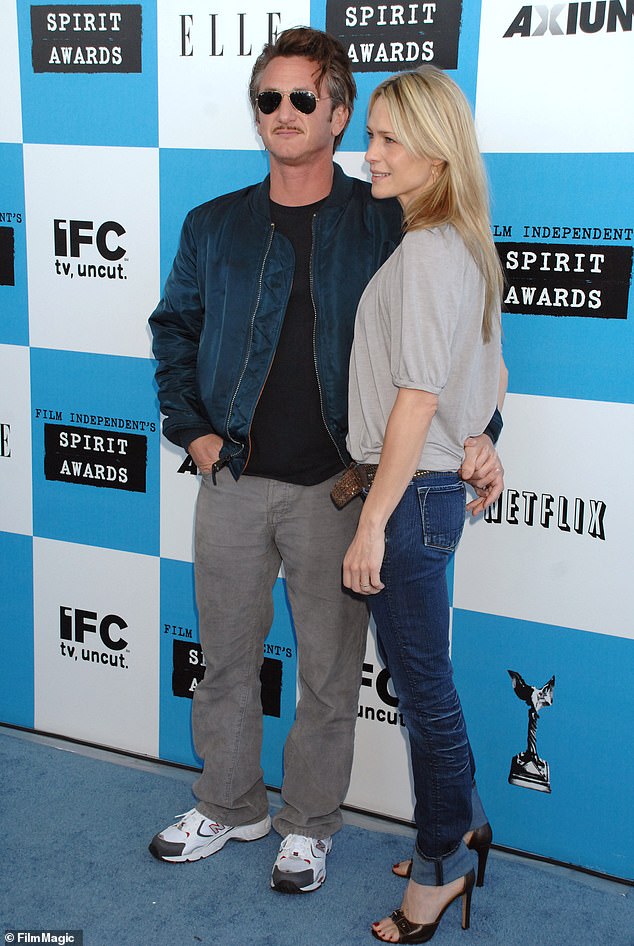 Tumultuous: The marriage had been very on-and-off and he had first filed to divorce the actress in December 2007 before they reconciled five months later; pictured 2007

The marriage had been very on-and-off and he had first filed to divorce the actress in December 2007 before they reconciled five months later.

In April 2009 the actor filed for divorce again, before he withdrew the motion just one month later.

However in August of that year, Wright filed for divorce and court records show that they were officially ruled divorced less than one year later, on July 22, 2010.

In 2012 Penn had dropped a bombshell while speaking to Esquire saying that he felt like he was never truly ‘loved’ by Wright or his first wife Madonna. 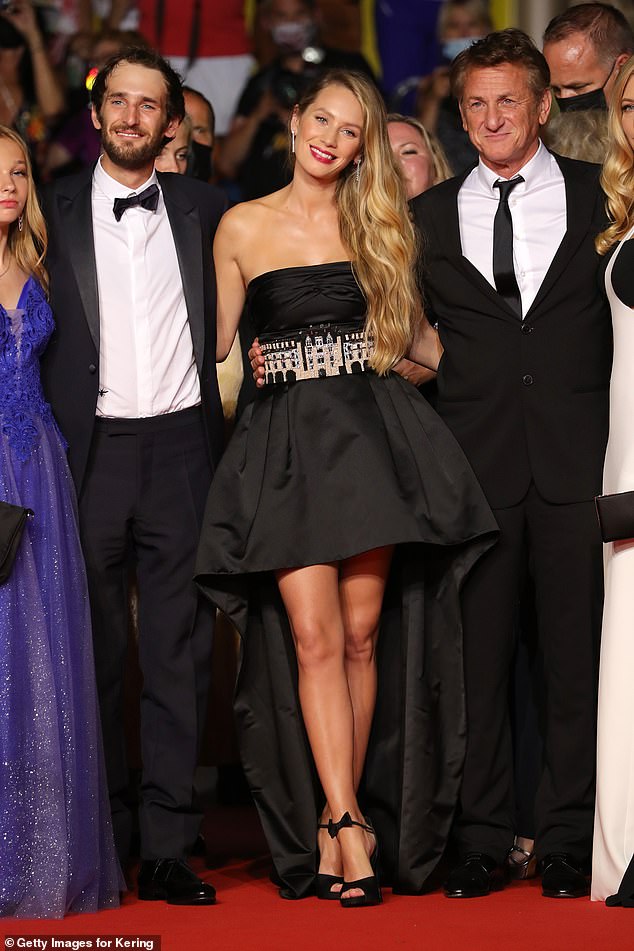 ‘There is no shame in my saying that we all want to be loved by someone. As I look back over my life in romance, I don’t feel I’ve ever had that. I have been the only one that was unaware of the fraud in a few of these circumstances blindly.

‘When you get divorced, all the truths that come out, you sit there and you go, What the f**k was I doing? What was I doing believing that this person was invested in this way? Which is a fantastically strong humiliation in the best sense. It can make somebody very bitter and very hard and closed off, but I find it does the opposite to me. ‘

In 2014 Wright told The Telegraph that the whole divorce process — especially with kids involved — was ‘devastating.’

‘Divorce in and of itself, and with children, is devastating. Worst than that. One of the reasons why we got back together and broke up so much was trying to keep the family together. If you’ve got kids, it’s a family, and you try again, and you try again. We did that for a long time.’ 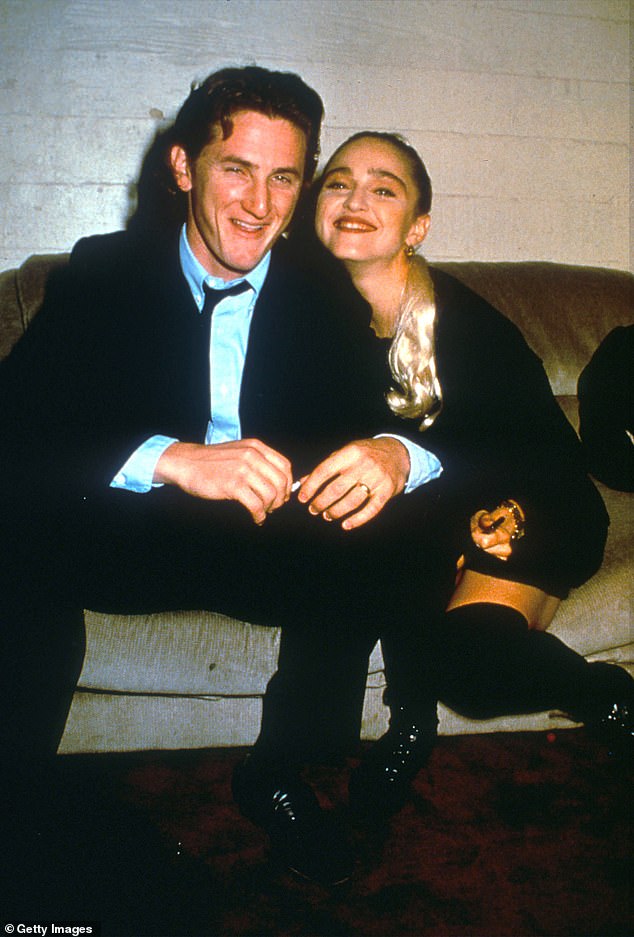 First love: He was married to Madonna from 1985 to 1989 but the relationship was incredibly tumultuous and included several instances of physical and emotional abuse; pictured November 1987 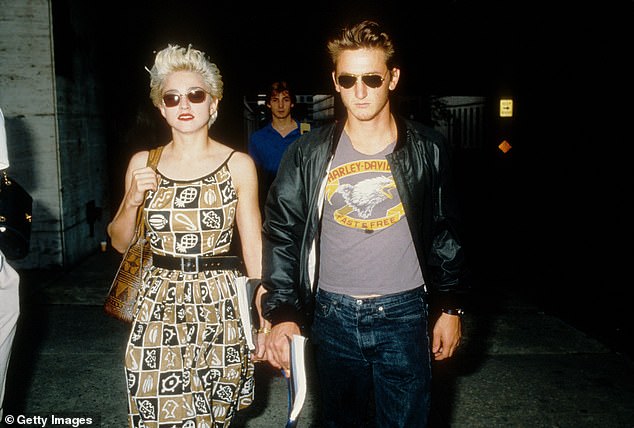 Problematic: Just before she filed to divorce him, she filed a police report against him after he scaled their Malibu home and told her he owned her ‘lock, stock, and barrel,’ and then proceeded to physically terrorize her, leaving her with injuries including a busted lip; pictured August 1986

He was married to Madonna from 1985 to 1989 and had spoke about always having a special place in his heart for the Material Girl singer, saying in a 2018 Stephen Colbert appearance ‘I love my first wife very much.’

In 2016 Madonna confessed that she was ‘still in love’ with the actor and jokingly offered to re-marry him if he paid $150,000 to her charity.

When she filed for divorce she cited irreconcilable differences. Prior to their wedding she seemed to think it was headed for trouble: ‘His temperament is also similar to mine. That doesn’t always make for ideal relationships, but I don’t know what will happen.’

The relationship was plagued by physical and emotional abuse, and she sought psychiatric help after the wedding.

In June 1987 he reportedly hit her across the head with a baseball bat but she refused to press charges.

Two years later she filed a police report after he scaled their Malibu home and told her he owned her ‘lock, stock, and barrel,’ and then proceeded to physically terrorize her, leaving her with injuries including a busted lip.

According to reports: ‘When she told him she was leaving the house, he tried to bind her hands with an electric lamp and cord. Screaming and afraid, Madonna fled from the bedroom. What followed was a nine-hour ordeal which left her deeply shaken. Penn chased her into the living room, caught her and bound her to a chair with heavy twine. Then he threatened to cut off her hair.’

Penn was charged with felony domestic assault, but Madonna told the DA to drop the charges against him, though he eventually pleaded guilty to a misdemeanor. They split shortly thereafter. 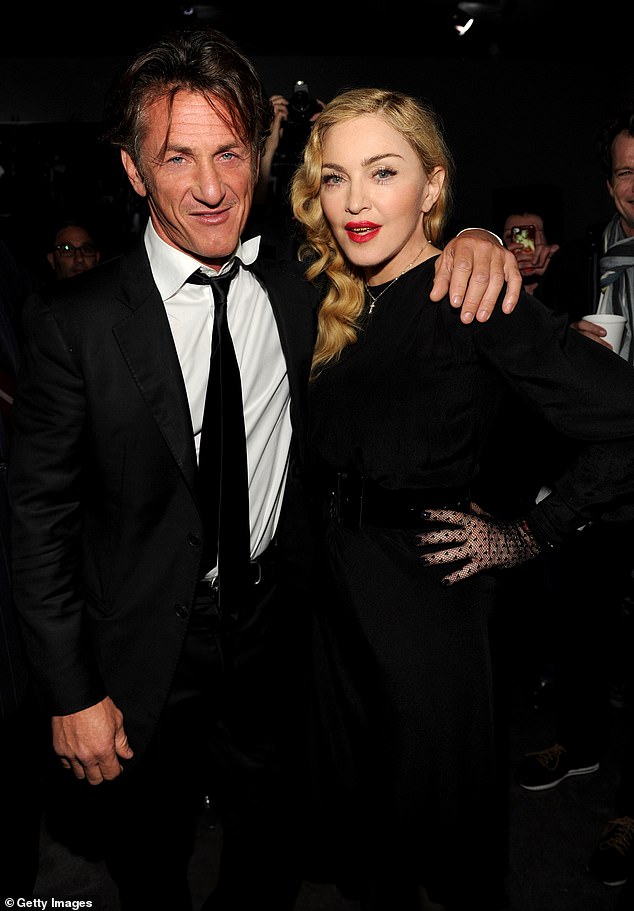 Rekindling? In 2016 Madonna confessed that she was ‘still in love’ with the actor and jokingly offered to re-marry him if he paid $150,000 to her charity and two years later he said on a Stephen Colbert appearance ‘I love my first wife very much’; pictured 2013