His masterpiece, Watership Down sold tens of millions of copies worldwide and depicted an imperilled landscape through rabbits’ eyes.

So Richard Adams, who died aged 96 in 2016, would surely have saluted the inventive verve of his granddaughter, Lucy Moonen.

She has just written her first book, Simon And Rosie, a children’s story that chronicles the friendship which develops during the coronavirus outbreak between a young girl, Rosie — and Simon, a lonely park bench. 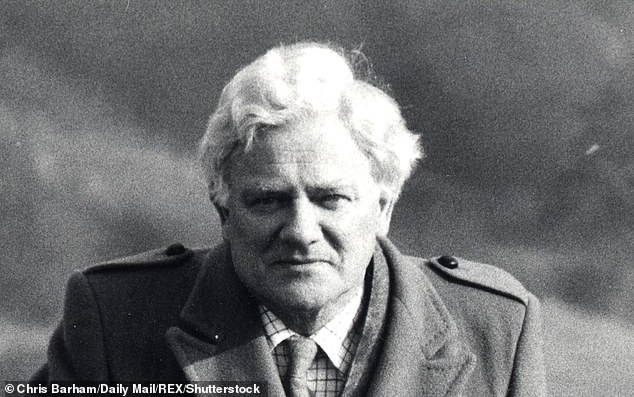 Richard Adams is pictured above. His masterpiece, Watership Down sold tens of millions of copies worldwide and depicted an imperilled landscape through rabbits’ eyes

‘I have always wanted to write and grew up assuming that people write, because my grandfather was always writing away in longhand,’ Moonen, a history teacher, tells me.

‘Being on maternity leave during lockdown meant that I’d been spending more time with my children and trying to occupy them,’ adds Moonen, 33, who has two daughters, Chloe, three, and Thea, eight months. 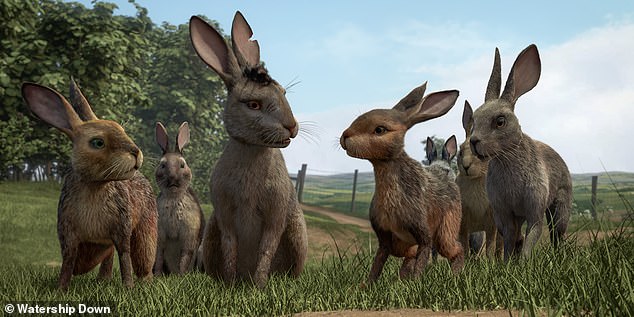 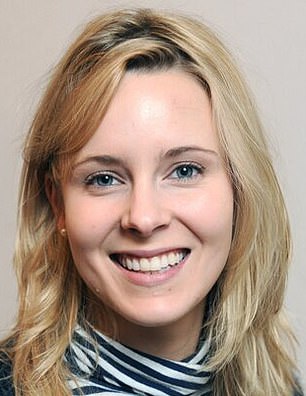 Richard Adams, who died aged 96 in 2016, would surely have saluted the inventive verve of his granddaughter, Lucy Moonen

‘I always read to them — and try to engage with their imaginative games.’

Simon the talking bench duly evolved. Moonen, who collaborated on the book, which can be downloaded free at SimonandRosie.com, with illustrator Gillian Johnson, says: ‘All we ask for is a voluntary donation to the NHS.’

Her grandfather’s influence, she adds, is always with her. ‘He read to us a lot. He loved Winnie-the-Pooh. I still hear Winnie-the-Pooh characters in his voice; I’m reading it aloud now, to my daughter, and I hear his voice when I read it, which is bittersweet.’

Last week there was relief for the family when a High Court battle against a U.S. film producer ended successfully, ensuring that the rights to Watership Down reverted to Moonen’s mother, Juliet. 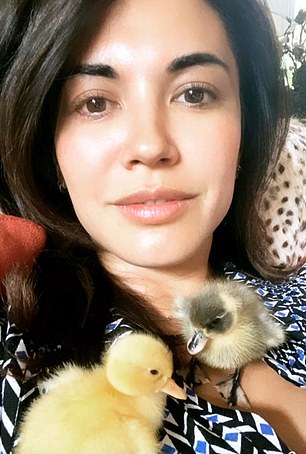 Model and mother of four Lohralee Astor, 41, who is the wife of Samantha’s half-brother, Will Astor, shared a video of herself holding her new ducklings, Duck Duck and Waffle

Designer Samantha Cameron is becoming a trendsetter in her own family.

Just weeks after she and her husband, ex-PM David, acquired chicks to raise at their Oxford home, her sister-in-law reveals she, too, is rearing baby birds.

Model and mother of four Lohralee Astor, 41, who is the wife of Samantha’s half-brother, Will Astor, shared a video of herself holding her new ducklings, Duck Duck and Waffle.

‘They are very sweet. We hatched them from the eggs we got from my mother-in-law, Annabel,’ Lohralee tells me.

‘They are mine for a month but they will go to my sister-in-law Flora, who lives in the countryside so she can manage them as they get older.

‘They love a snuggle and adore swim times in the sink.’ 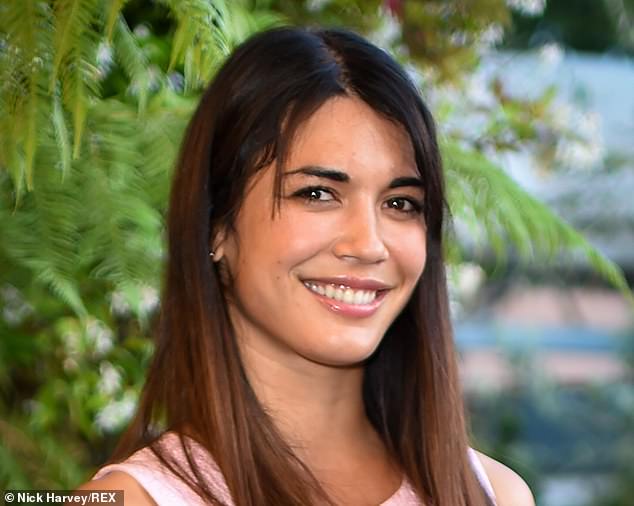 ‘They are very sweet. We hatched them from the eggs we got from my mother-in-law, Annabel,’ Lohralee (above) tells me.

Tempted back to the screen by her film director husband, Seventies sex symbol Lesley-Anne Down insists she won’t be baring all again — even though she looks better than ever at 66.

‘I’m actually in the best shape I’ve ever been,’ boasts Upstairs Downstairs star Lesley-Anne. ‘I weigh even less — my working-out ability is superb.’

‘I ran away from two Bond movies, The Man With The Golden Gun and The Spy Who Loved Me, and I turned down the part Susan Penhaligon played in Under Milk Wood because of the scene in which she draws lipstick on her naked breasts.’ 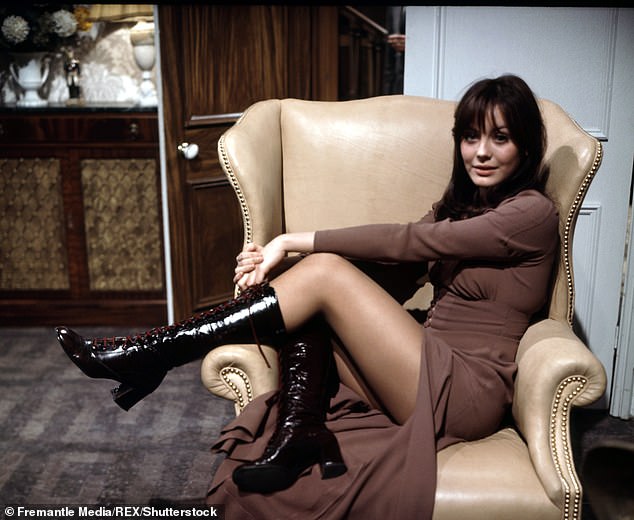 The LA-based actress (pictured in the 1970s) appeared in her husband Don E. FauntLeRoy’s latest film, Gates Of Darkness

Harry Potter star Miriam Margolyes claims her thin counterparts refused to stand next to her at parties when she lived in Hollywood because they feared fat was contagious.

‘In LA they’re frightened to stand next to you in case they catch fat. That was a problem, because I was always fat. It’s a very cruel city.’

Government ministers should stand by for a deluge of ‘black spider’ letters from Prince Charles. For I hear his local post office, at Crathie, near the Balmoral estate, reopened yesterday.

‘We have installed a traffic light system at the entry,’ it explained to customers. ‘One of the many social-distancing measures put in place to protect our patrons and staff.’

Charles, who is known for the frequency of the missives in his spidery handwriting, recently thanked Royal Mail workers for their ‘dedication, resilience and hard work’ during the crisis.

Fancy a job involving numerous royal births? The Queen needs a shepherd on her Norfolk estate. Sandringham Farm requires a ‘skilled stockperson to join our small team with responsibility for 3,000 breeding ewes’, it says on the estate’s website.

Candidates will ‘have experience in all aspects of sheep husbandry’. And no bleating about the pay: the ad promises an ‘attractive salary’.

That’s rich! Pippa Middleton’s brother-in-law, Spencer Matthews, claims to despise reality television — despite starring in the Bafta-winning Made In Chelsea, which helped make his name.

‘My wife loves the Kardashians. I can’t for the life of me understand why anyone would care about anyone’s day-to-day life,’ says the Old Etonian, who is married to Irish model Vogue Williams.

‘Which is odd, obviously, considering I’ve done lots of reality television. I can’t understand why anyone would watch reality TV. I don’t get it.’

Mick’s boy has a ball with mum Melanie

Rolling around is how Sir Mick Jagger’s girlfriend Melanie Hamrick is keeping their three-year-old son entertained during lockdown.

The 32-year-old American ballerina shared pictures of herself playing outdoors with Deveraux, both of whom sported red and blue inflatable body bumper suits.

Meanwhile, Mick, 76, whose Rolling Stones tour of the U.S. was postponed due to the pandemic, has been keeping active in other ways.

He has been performing virtual concerts from home, including the iFor India gig, which raised money for those affected by coronavirus in the subcontinent. 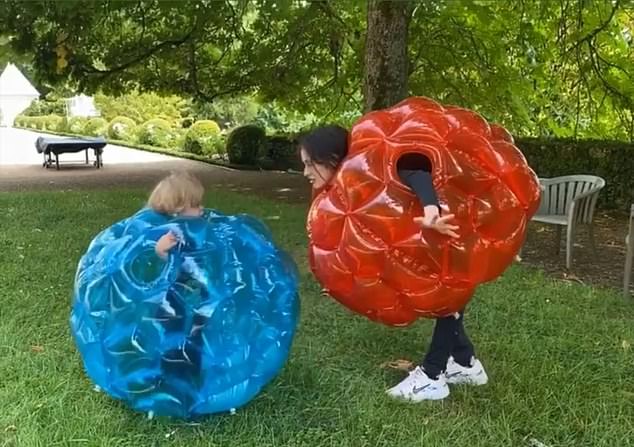