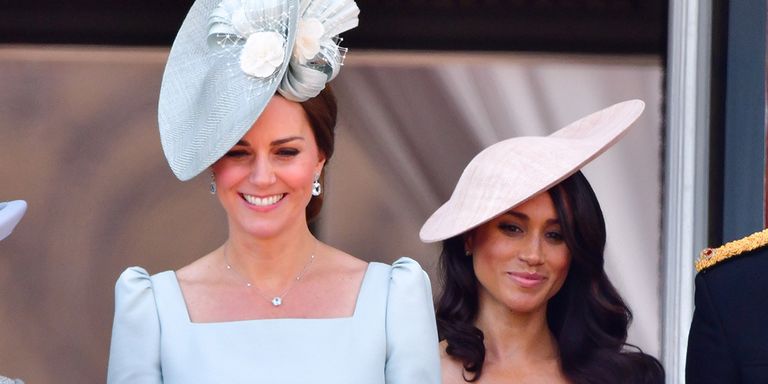 Yesterday was a very big day for the royal family, but especially for the Duchess of Sussex.

Meghan Markle attended her first Trooping the Colour with the royals on June 9 to celebrate the Queen’s birthday. (Elizabeth II‘s real birthday is in April, but her parade is always in June.) And she made her debut on the iconic Buckingham Palace balcony, where she and sister-in-law Kate Middleton showed off perfect matching curtsies!

Kate, Meghan and Harry curtsying to the Queen on balcony of Buckingham Palace #TroopingtheColour pic.twitter.com/I0Fs8R928O

As soon as the Queen was in sight, Kate, who was slightly in front of Meghan, smiled and lead the way with her curtesy. A moment later, the new Duchess completed hers in sync with Prince Harry, who bowed his head as a sign of respect for the Queen.

Many people on Twitter are speculating that Prince Harry cued Meghan when it was time.

We wouldn’t be surprised if that’s really what he said. Prince Harry was reportedly calming Meghan’s nervous throughout the whole parade. According to the Mirror, who spoke with a “lip reader,” Harry was checking if Meghan was okay throughout the day after she admitted she was “nervous.” He even explained what was going to happen next before each ritual.

Meghan did a great job handling all of the excitement, and if she really was nervous (totally understandable), no one could tell because she looked flawless.

From: Good Housekeeping US