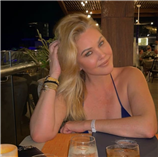 The newly engaged Travis Barker got a new tattoo of Kourtney Kardashian’s lips.

That sweet gesture towards his fiancee also served another purpose: erasing his ex-wife.

Travis wiped away the tattoo of his ex, Shanna Moakler, purging it from his body as he anticipates his marriage to Kourt.

Shanna clearly has something to say about that.

Over the weekend, Travis Barker augmented his already impressive tattoo collection with some new ink.

The most eye-catching choice, of course, was the addition of Kourtney’s lips.

She provided a print of her lipstick print in the form of a lovely kiss, a perfect reference for the tattoo artist.

But celebrity tattoo artist Scott Campbell did not limit himself to Kourtney’s lovely lady lips.

Travis had another request, complete with a reference image.

He wanted a large black scorpion tattoo on his arm.

Campbell uploaded a couple of teaser images alongside a caption.

“Scorpio season on @travisbarker …” he wrote.

Campbell added: “Lips straight from the mouth of @kourtneykardash Congrats you two.”

The placement was no accident.

Travis’ goal was for the black scorpion to eclipse Shanna Moakler’s name.

She is the mother of his children, but they have been exes for years — and he’s now happily engaged.

Shanna had already responded to the engagement news by taking a brief social media hiatus.

The day after Travis proposed to Kourtney, she said as much.

On her Instagram Story, she wrote at the time: “Temporarily closed for spiritual maintenance.”

Since then, she has clearly returned from that maintenance … and seen the tattoo news.

She followed the update on her ex’s ink with a cryptic quote.

Sharing a still from Point of No Return, the 1993 assassin thriller, she included a quote: “I never did mind about the little things.”

Shanna also included the lip emoji, a bit of a hat nod that she’s not just watching 28-year-old films.

That emoji has been almost universally interpreted as an acknowledgment that this is about Kourtney and Travis.

It’s not clear if she’s saying that she doesn’t feel petty about it … or that she considers it a direct insult.

For the record, Shanna herself had a tattoo of her own of Travis’ name.

We say “had,” in the past tense, because that is no longer the case.

Shanna had that piece of ink expunged from her body back in May of this year, several months into Travis’ whirlwind romance with Kourtney.

Five months later, Travis took Kourtney to a romantic setting on the beach to propose.

She had been expecting a proposal from him (honestly, who among us had not?), but hadn’t known when or how it would come.

Shanna was very vocal during the early months of Kourtney and Travis’ PDA-packed relationship.

She had no kind things to say about Kourt. She claimed that Travis once cheated on her with Kim, which Kim categorically denied.

Perhaps getting put on blast by her own daughter, Alabama Barker, made Shanna opt for more tasteful vagueposts.