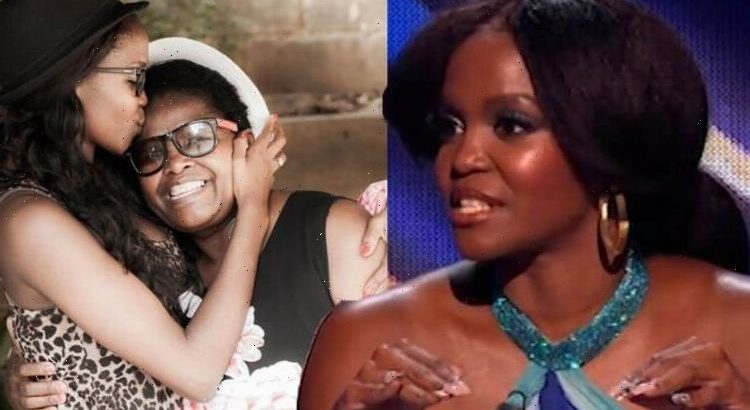 Oti Mabuse, 31, was born in South Africa, growing up in a “really dangerous” area due to riots. The Dancing on Ice judge has credited her mother for the many “opportunities” she was offered, including even opening her own dance school as there wasn’t one at the time for “Black kids”.

She always fought for us!

Oti had a successful career on Strictly Come Dancing, being the only professional to lift the glitterball trophy for two consecutive years.

She now judges on Dancing on Ice, bringing her dancing knowledge to the talented panel.

Appearing on BBC Radio 4’s Desert Island Discs, Oti detailed how her mother Dudu is the reason for her successful career.

Oti explained how her mother wanted her to have every “opportunity” due to the “segregation” when she was a child.

She said: “But also in those years, Black people weren’t allowed to even be in the same room or the same dance floor as white people.”

This motivated Dudu to start her own dance school, as “no one was teaching Black kids how to dance” where they lived at the time.

The community they grew up in was also “really dangerous”, so Oti’s mother started her own transport system to bring children to and from school.

Growing up at her mothers dance school meant that dance was “all she saw” and her mother kept a very strict regime which only included school, sports and dance.

Oti said: “She just didn’t want us to grow up and feel like we didn’t have opportunities and she wanted to make sure that we were always busy so that we wouldn’t have been on the streets, we weren’t getting up to any mischief.

“She always fought for us and she taught us to fight for ourselves and not take no for an answer and be as ambitious and dedicated and competitive as we are.”

Oti described her mother as “amazing” and “determined” crediting her upbringing for her current successes.

The dancer joined Strictly on its thirteenth series in 2015 and was partnered with Olympic boxer Anthony Ogogo.

In 2016, she was partnered with Danny Mac and the couple reached the final.

For her fifth stint, her competitive streak took control with Emmerdale actor Kelvin Fletcher as they lifted the Glitterball.

She then lifted the Glitterball again the following year with Bill Bailey, making her the only pro to win twice in succession.

Oti took to Instagram on February 22 to announce her leave from the show, to focus on other projects, including Dancing on Ice.

She penned: “Never easy to say goodbye. I have been part of the most amazing TV show, Strictly Come Dancing for the past seven years and it has been an incredible time.

“Lifting the glitter ball twice and having the best journey with all my celebrities, but also meeting and working with the best team, crew, producers, celebs and incredible professional dancers!

“You are my family and I adore you all forever.

“I can’t put into words how difficult this decision has been, but I have decided not to return for the next series.”