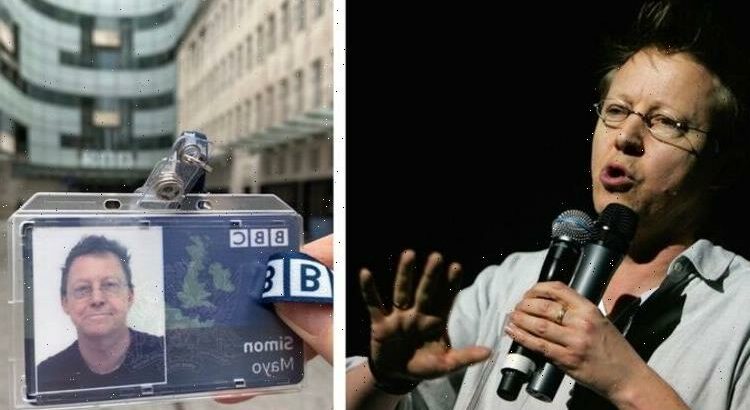 Simon Mayo, whose final BBC5 Live show airs today, has been a BBC employee since 1982. However he faced an embarrassing moment when his pass was cancelled before he’d so much as left the firm, leaving him trapped inside the building – and the veteran presenter took to Twitter to reveal all about how the fiasco unfolded.

My BBC pass was cancelled before I left the building. So the security doors wouldn’t work.

In his first tweet about his final day of BBC work commitments, he announced to over 280,000 followers: “Last day of term (40 years after it started). So. Once more, with feeling…”

He attached a photo of himself clutching his pass while standing outside the studios, not realising an internal blunder had caused it to be deactivated a little too soon.

The situation quickly turned from a touching memorial post about his last day at the corporation to an awkward and faltering exit.

Soon afterwards he came back to update followers: “And my BBC pass was cancelled before I left the building. So the security doors wouldn’t work.

“Had to be helped out. #notquitethegoldwatch,” he added sarcastically.

The veteran broadcaster quickly received a flood of support in light of his misfortune – and a string of responses from those who’d had their own unceremonious endings to employment with their companies.

“I feel for you!” exclaimed Twitter user @julie_trudgill, adding: “Nobody seems to appreciate anyone nowadays.

“When I retired after 33 years of teaching I was asked by email to get someone to bring in my keys and laptop. Not even a bunch of flowers!

“Felt like I had been sacked. Sad other colleagues didn’t see anything wrong.”

Meanwhile @gallagherbren58 recalled his own bitter experience leaving books and a new laptop at his office, only to be “escorted out” swiftly – and ended up losing the contents.

“Never saw my bag or its contents again!” the dismayed follower continued.

Plus another employee with a similar experience, @D0bryDan chimed in: “I wonder why I didn’t just leave early frankly.”

Mark Charnock thanks Georgia Taylor after ‘taken for granted’ claim

@conlan_jace replied to lament: “So sad ! I was hoping this was all part of some elaborate April Fools’ prank.”

@FluffyMog opened up to add: “I’ve got to be honest. I’m glad you guys are leaving the BBC.

“It’s an institution that increasingly demonstrates values I don’t share and the presence of you and Kermode at it made me feel nostalgic for when I trusted it. Now I can listen to you somewhere else.”

Also looking on the bright side, @willywillett paid tribute to the radio star with the words: “Listened to @simonmayo for more years than I care to remember, encouraging others to listen too, always the highlight of the day with your musical choice and banter.

“Friday evening is my favourite time of the week listening to you on @greatesthitsuk long may it continue!”

However not all tweeters were as sympathetic, with @dabe1971 challenging that it had been his own “choice to move to pastures new”.

He enclosed a copy of a statement he had made about the ending of his show Kermode and Mayo’s Film Review, in which the pair joked that “21 years is a long time to be clogging up the schedules” and announced their intention to voluntarily step away.

The statement had also made a reference to exiting “pursued by a bear”.