Sinead O’Connor has issued an apology for saying she ‘doesn’t want to spend any more time with white people’ following her conversion to Islam last year.

In a tweet posted to her account on Sunday, the Irish singer, 52, claimed she was ‘angry and unwell’ when she made the ‘racist’ comment’, and insisted her remarks were ‘not true at the time and are not true now’.

The musician – who is also known as Shuhada’ Davitt – also appeared on RTE’s The Late Late Show to discuss her new faith as she revealed she’s ‘found home’ in Islam and has realised she’s been a Muslim ‘all my life’. 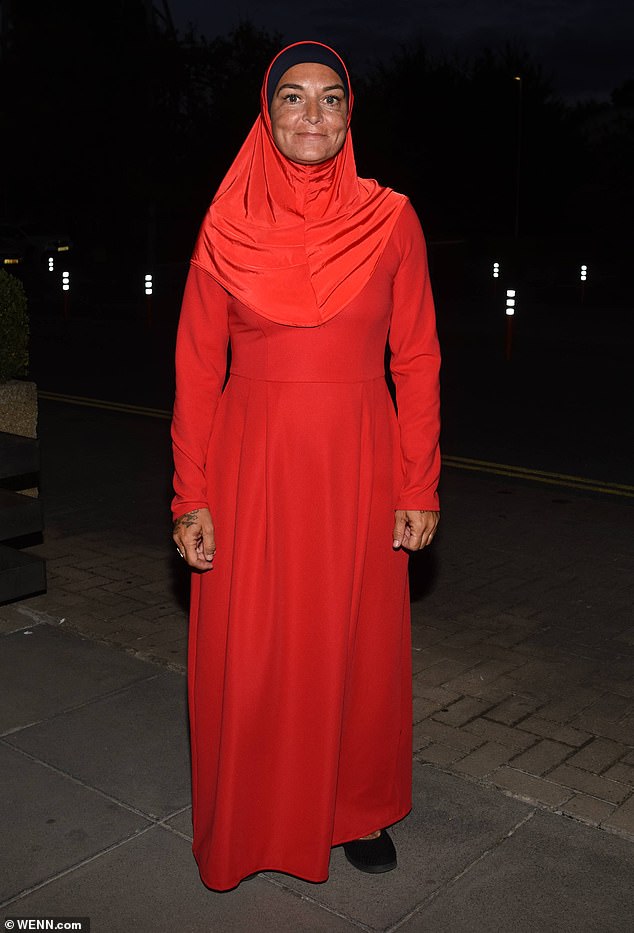 ‘I was angry and unwell’: Sinead O’Connor has issued an apology for saying she ‘doesn’t want to spend any more time with white people’ following her conversion to Islam last year

In October last year, the Nothing Compares 2 U hitmaker sparked outrage from both Muslims and non-Muslims on Twitter when she claimed she no longer wants to spend time with ‘disgusting white people’.

The tweets posted by the former rock star included the hashtags: ‘#TrustMeIAmaSoldier, #NotAsF*****CrazyAsSheLooks’ and #ReignOfWhiteMANover.’

Sinead reiterated her comments the following month as she added: ‘I’m terribly sorry. What I’m about to say is something so racist I never thought my soul could ever feel it.

‘But truly I never wanna spend time with white people again (if that’s what non-muslims are called). Not for one moment, for any reason. They are disgusting.’ 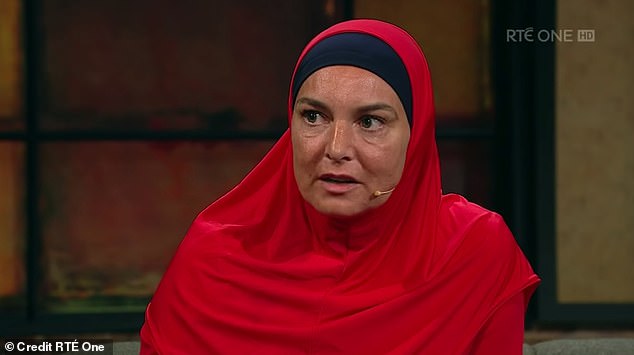 ‘I’ve been Muslim all my life’: The musician – who is also known as Shuhada’ Davitt – also appeared on RTE’s The Late Late Show to discuss her new faith

Referring to the backlash received from social media users, the Thank You for Hearing Me hitmaker posted: ‘Forgive me. Sometimes the Lord needs dirty workers ; )’. [sic]

Nearly a year on from her bizarre social media activity, the Fire on Babylon singer explained: ‘As regards to remarks I made while angry and unwell, about white people…

‘They were not true at the time and they are not true now. I was triggered as a result of islamophobia dumped on me. I apologize for hurt caused. That was one of many crazy tweets lord knows.’ [sic] 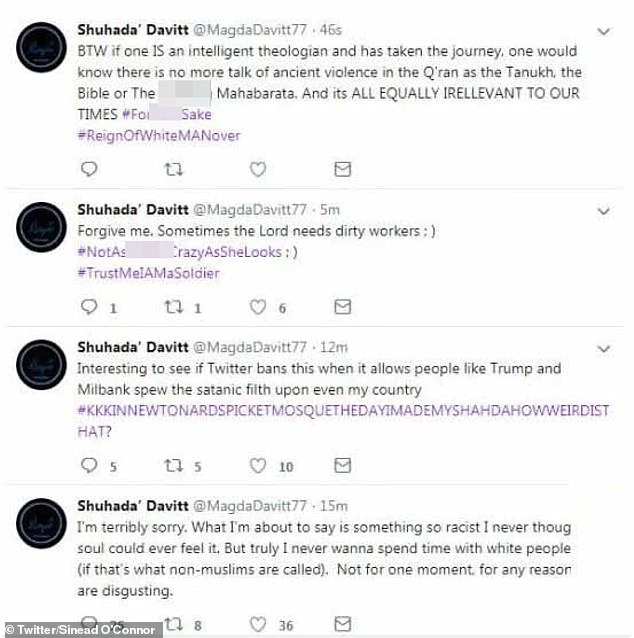 Past comments: In October last year, the Nothing Compares 2 U hitmaker sparked outrage when she claimed she no longer wants to spend time with ‘disgusting white people

During a recent appearance on The Late Late Show, Sinead detailed her conversion to Islam: ‘I never thought I’d join another religion. I left Islam till last as I had so much prejudice about Islam, you know.

‘I read chapter two of the Qu’ran and I realised I’m home, and that I’ve been a Muslim all my life. There’s a way of thinking.

‘You can be a Muslim without actually being a Muslim as it’s a headset. A Muslim is someone who believes nothing should be worshiped except God. 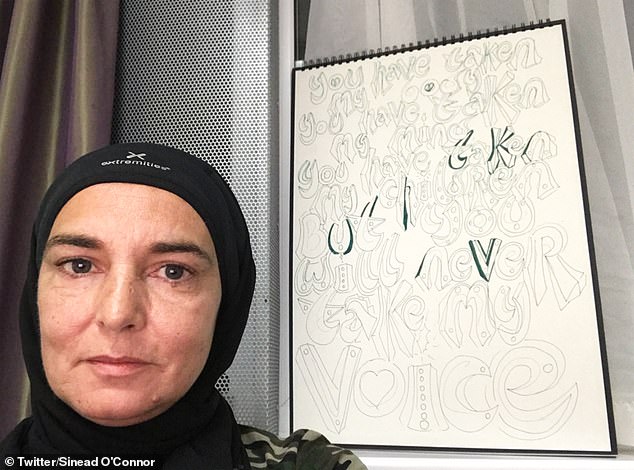 ‘I realised I’m home’: During a recent appearance on The Late Late Show, Sinead detailed her conversion to Islam

In late October, the mother-of-four – who was ordained as a priest by the traditionalist Catholic Tridentine movement in the 1990s – announced: ‘This is to announce that I am proud to have become a Muslim.’

She added: ‘This is the natural conclusion of any intelligent theologian’s journey. All scripture study leads to Islam. Which makes all other scriptures redundant. I will be given (another) new name. It will be Shuhada.’

The singer said she was given her first hijab by her friend Elaine and ‘got chills all over’ her body when she put it on.

She has had a well-documented battle with mental health problems, which have been fuelled by a number of marriage break-ups and legal issues. Sinead revealed she attempted suicide in December 1999 on her 33rd birthday.

In October 2007 she said she had been diagnosed with bipolar disorder four years earlier and has had a number of stints in rehab facilities across the USA.

The former rock star last year claimed her late mother was ‘possessed’ and repeatedly sexually abused her as a child.

A member of her family also reported her missing in 2016 over fears she was suicidal.  She was found in a Chicago hotel room.

In recent years she has largely stayed away from her native Ireland where her four children Roison, Sahne and Yeshua live, in favour of the US. 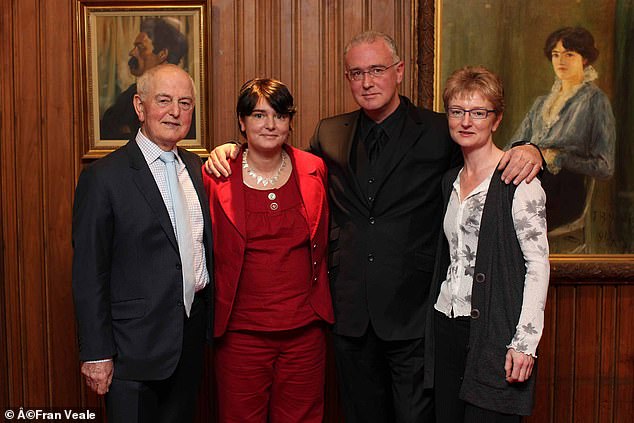 Tension: Sinead is pictured second left in 2011 with her father Sean (left) and siblings Eimear and Joseph. She has been estranged from her family in recent years

In addition to four marriages, the singer has been involved in three relationships that produced children, as well as, she claims, three serious affairs with women. Here is a list of her relationships:

She had her first son Jake with her first husband, drummer and music producer John Reynolds. He worked on multiple albums with her including Universal Mother and they married in 1987 before their union broke down in 1991.

Roisin’s father is Irish reporter John Waters – and the couple had a lengthy custody battle in the mid-1990s which culminated in O’Connor agreeing for her daughter to live with Waters in Dublin.

She married the British journalist Nick Sommerlad in a secret ceremony in the summer of 2001 after a whirlwind romance but they soon split up.

O’Connor had her third child Shane with Irish musician Donal Lunny in 2004, around the time she said she was retiring from music – although she later restarted her career again.

In 2006, Sinéad began a relationship with Frank Bonadio, the estranged husband of singer Mary Coughlan, that produced a son, Yeshua. They split in early 2007 but remained friends.

O’Connor married her longtime friend and frequent collaborator Steve Cooney in July 2010 but their union only lasted until the following April.

She wed Barry Herridge, an Irish therapist who helped her with her son was ill, in 2011 in Las Vegas but the marriage lasted for a mere three weeks – and they only lived together for seven days. Although they separated, they are not believed to have legally divorced.