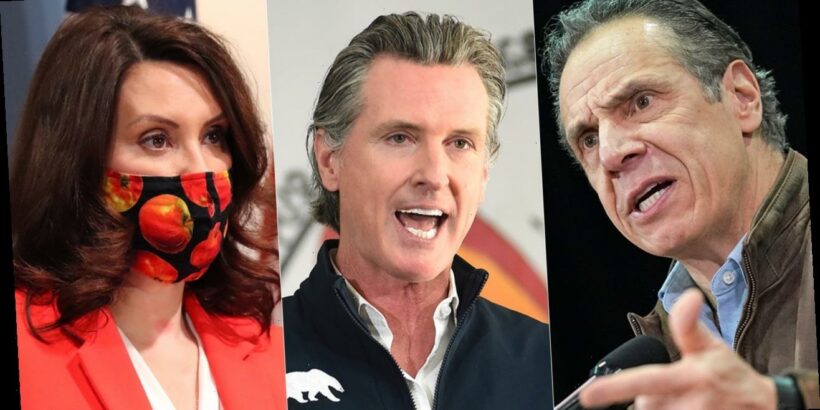 The three governors (played by “SNL” cast members) served as judges on an ethically questionable, Dr. Anthony Fauci-hosted game show called, “So You Think You Can Get the Vaccine?”

Cuomo (Pete Davidson) was introduced as being “currently under fire for futzing with old, dead people and also the kind of sexual harassment allegations that make you say, ‘Yeah, I could see that.’”

The real Cuomo has been embroiled in multiple scandals recently: He has been accused of harassment by two former female aides and of undercounting nursing home pandemic deaths.

Newsom (Alex Moffat), who faces a recall effort, was also disparagingly introduced as “hated by every single person in California except for those 10 people he had dinner with in Napa that one time.”

He described the coronavirus situation in his state as, “teeth white, bodies tight, COVID pretty bad.”

Whitmer (Cecily Strong) joined the others as Fauci (Kate McKinnon) explained the idea behind the game show.

“The vaccine shouldn’t be a competition but Americans will only want to get it if it means someone else can’t,” Fauci explained before introducing a series of contestants who clearly wouldn’t qualify.

One woman claimed she was an “essential” worker because she did IT for the risque website OnlyFans and had herpes, while another was pretending to be an old woman because she wanted to hook up with a guy who just got out of a relationship.

The vaccines were denied but Fauci promised consolation prizes to the losers, such as a Pfizer visor and, because it rhymes with vaccine, “Maxine,” a “cranky” cartoon character from Hallmark greeting cards.

The governors were also given the opportunity to explain who counts as an essential worker in their respective states.

U.S. Sen. Ted Cruz, R-Texas (Aidy Bryant), also joined the show as a contestant, but he appeared to be angling to showcase his stand-up comedy talents rather than trying to get the vaccine.

“It is great to be back in New York City,” the senator said, redoing the comedy routine from his CPAC appearance this week. “Sorry, my arms are tired ’cause I just flew back from Cancun, Mexico.”

The real Cruz made a similar joke at the Orlando, Fla., conference to make light of his ill-timed trip to a sunny resort amid his state’s winter-storm crisis.

In the end, the governors were willing to give the vaccine to an 85-year-old contestant who described himself as the “world’s proudest granddad.”

But it didn’t work out because he couldn’t sign up for it online — or, as he called it, “on what?” — and he didn’t think he could find a young person to “click refresh” for the necessary “three straight days.”

“But if you do feel sick,” Davidson’s Cuomo advised the old man, “make sure you leave the nursing home and get to the hospital. Wink.”