Since the complete collapse of Star Wars Episodes I-III in public opinion, the word "prequel" has been a dirty word to people of a certain age in the fandom. When Disney took the reigns in 2012, the failure of those films loomed large, forcing the company to walk a fine line. Even though Solo takes place well before the events of Star Wars, the word prequel isn’t used much. When does Solo take place in the Star Wars timeline? Could it be set back during the time of the prequel films?

The answer to that last question is no. According to Wookieepedia, Han is 29 in A New Hope, and Luke and Leia are 19, a ten year age gap. Consider that The Phantom Menace is set when Luke and Leia’s father was not even ten years of age, and one can see the problem: Han would not have been born yet.

Now, Han would be alive in Revenge of the Sith, as he would be around the age of 10 when Luke and Leia were born. Doing a little more math, Han would also be alive during the events of Attack of the Clones, which takes place three years earlier, which puts him around the age of 7. This is a "Young Han Solo" movie, but not that young.

So like Rogue One, Star Wars has made another technical "prequel" to the original trilogy without going back as far as the prequels. So when is Solo set? 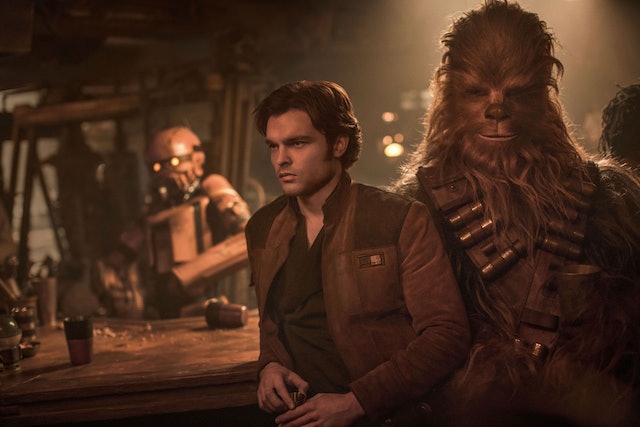 Alden Ehrenreich is slightly younger than Harrison Ford was when A New Hope was filmed. Ford was 33, Ehrenreich is currently 28, only a year younger than Solo would have been when meeting Luke and Leia. So obviously, our "Young Han" is younger than this. At least five years younger, if not more. He and Chewie have definitely been running the game together for a while before they met Obi-Wan in the bar.

But Star Wars has already handed eagle-eyed viewers a clue as to exactly when this film is set. Or perhaps more precisely eagle-eared viewers.

In the second trailer, there’s a clip of a scene where Han is struggling because he doesn’t have anyone to co-pilot the ship with him. Chewie, who is sitting behind him stands up and offers to help. Check it out at the 1:37 mark:

"190 years old?!" a flabbergasted Han shouts. Then he considers how to retrieve it. "You look great!"

But this also dates our film to the year. According to Smuggler’s Run – A Han Solo & Chewbacca Adventure, which is a Star Wars: The Force Awakens prequel novel, and therefore part of the new canon, Chewie was at the Battle of Kashyyyk in Star Wars: Revenge of the Sith. And moreover, the book states he’s 180 years old. That battle takes place in the year 19 BBY*, not long before the birth of the twins, means Chewie was 180 years old when they were born, when Han was all of 10.

(*BBY stands for "Before Battle (of) Yavin" which was also known as the "Battle of the Death Star," in which Luke destroyed the Empire’s first killing machine. The BBY/ABY calendar, which was adopted by the Expanded Universe and kept by Disney in the Legends transition, is also sometimes known as Before A New Hope/After A New Hope.)

If Chewie is celebrating 190 years of age in this film, then Han must be 20, and Luke and Leia, in their respective hideaways, are celebrating their tenth birthdays. It is the year 9 BBY.

Solo: A Star Wars Story opens in theaters across the country on Friday, May 25, 2018.