Star Wars Day 2018: Fans flock to social media to post fun ‘May the fourth be with you’ memes and quotes

It’s May 4th, the annual holiday that Star Wars buffs around the world wait anxiously to celebrate each year.

And the force was strong with fans of the beloved space opera franchise on Friday, as they headed to Twitter in their droves to say ‘May The Fourth Be With You.’

While Star Wars Day is officially May 25, in accordance with the release of the first film in 1977, fans were ready to celebrate in style as they shared some hilarious memes for the pun-tastic day. 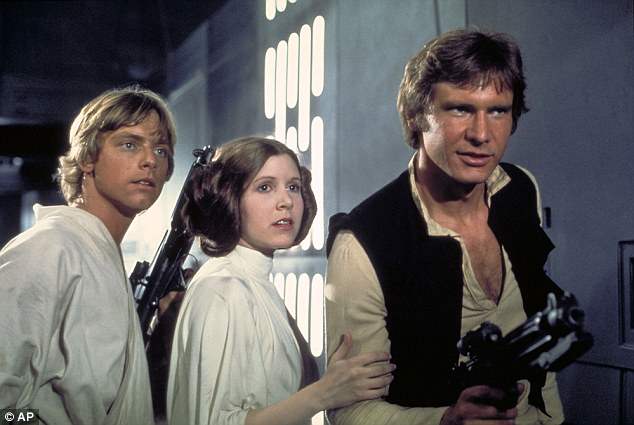 May The Fourth Be With You: Star Wars fans celebrated the space opera and annual holiday in style by sharing memes, quotes and more on Twitter on Friday

Celebrities and fans alike flocked to their social media to celebrate the occasion, and there were even some special messages put up in airports and train stations for some eagle-eyed viewers.

Heathrow Airport put up an especially fun departures board in honour of the day, which had information on flights to locations from the films like the ice planet Hoth, which first appeared in The Empire Strikes Back.

The information board even had a cancelled flight to Alderaan, Princess Leia’s home planet which was destroyed by Darth Vader in the original film as punishment for her and the citizens’ role in the establishment of the Rebel Alliance. 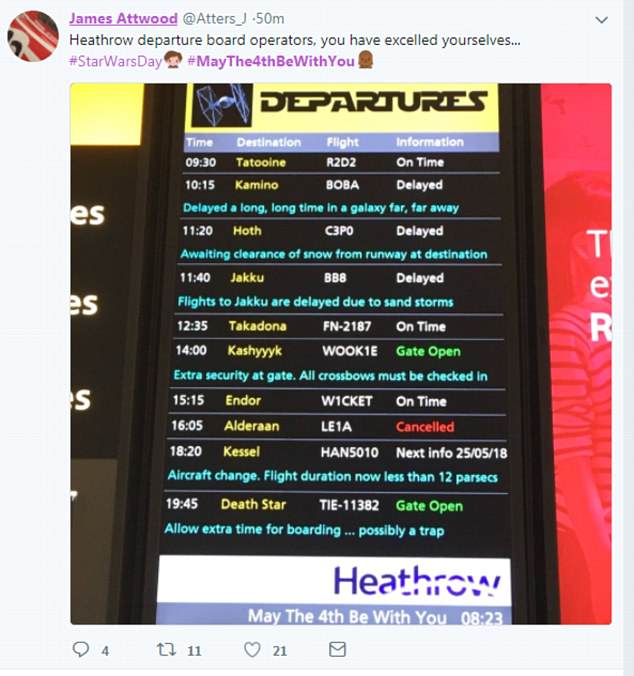 Having fun: London’s Heathrow Airport put up an especially fun departures board in honour of the day, as it had information on flights to locations from the films like the ice planet Hoth 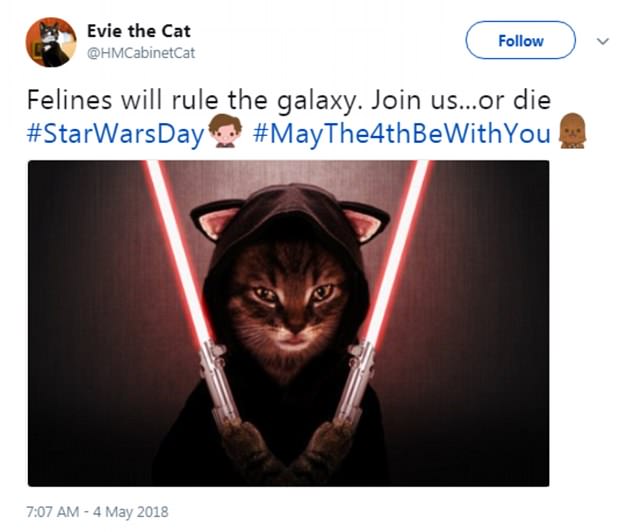 Playing dress up: The day of celebration also saw fans share pictures of themselves and their pets in Star Wars themed costumes, including one of a cat dressed like a Sith Lord 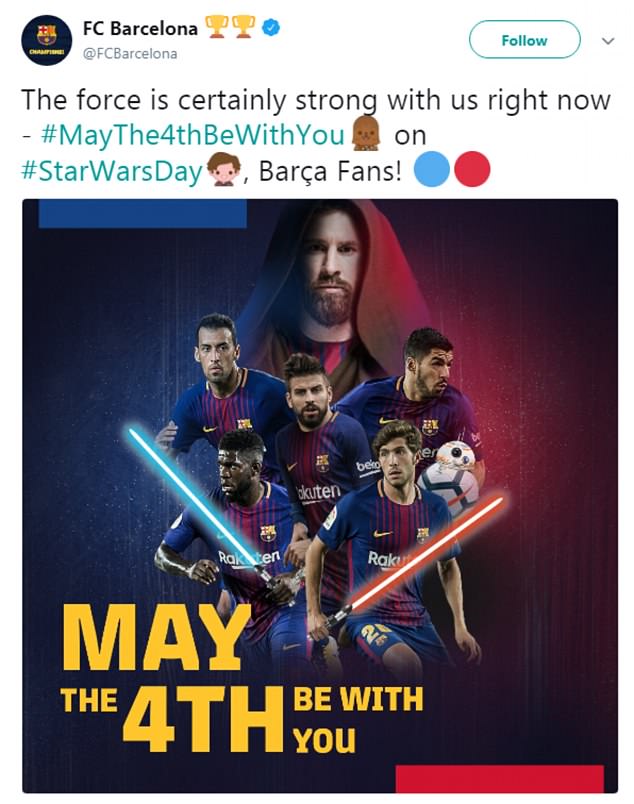 ‘The force is certainly strong with us right now’: FC Barcelona took the day as a chance to boast about their recent successes 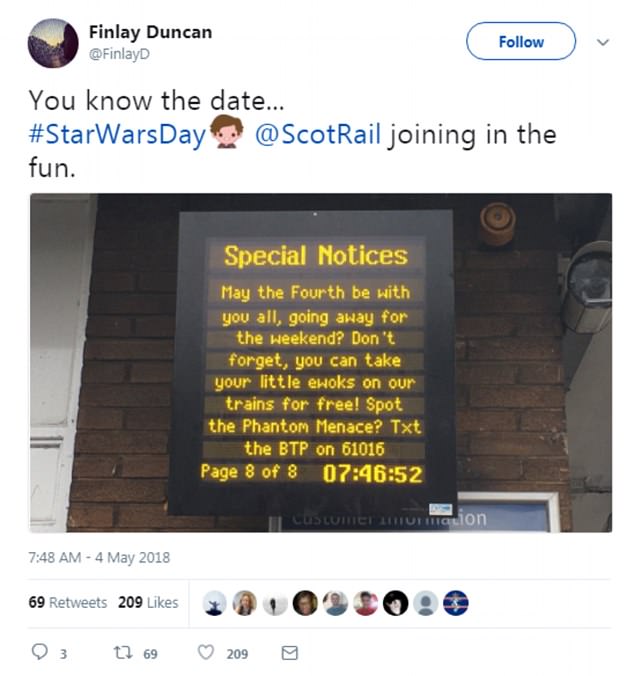 Spot the difference: There were even some special messages on the departure boards in train stations for eagle-eyed fans to spot

Joking around: Luke Skywalker himself took to Twitter to joke with fans the day before the main event, as Mark Hamill wrote: ‘May The Third Be Absurd’ 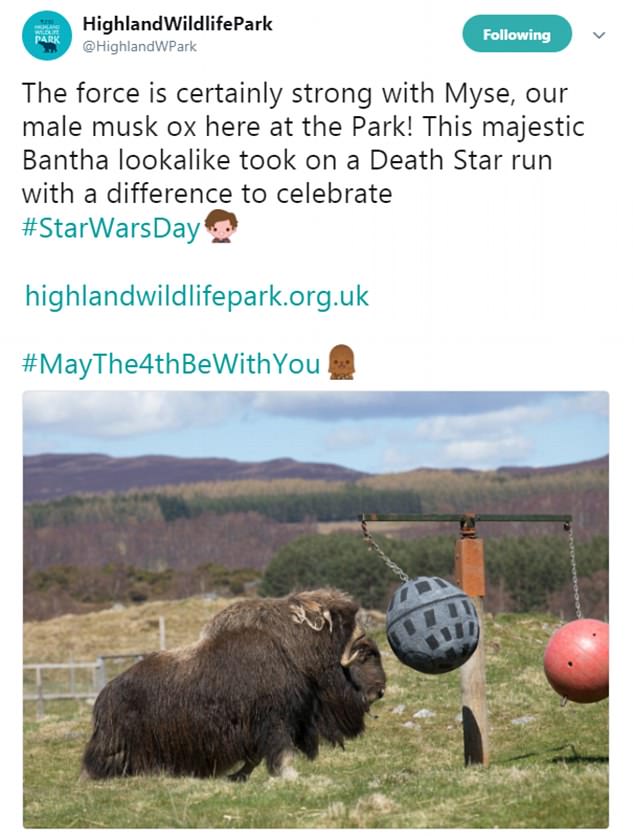 Ox not to love? Highland Wildlife Park had its male musk ox Myse take on a Death Star run for the occasion

The day of celebration also saw fans share pictures of themselves and their pets in Star Wars themed costumes, including one tweet which used an edited snap of a cat dressed like a Sith Lord to claim that ‘Felines will rule the galaxy.’

Another meme showed the stand-off between Darth Vader and Obi Wan Kenobi from the original Star Wars film, where the latter made the hilarious quip: ‘Nice suit Vader…it must have cost you…an arm and a leg,’ in reference to the prequel film Revenge of the Sith, where the Dark Lord lost his limbs in battle.

Luke Skywalker himself took to Twitter to joke with fans the day before the main event, as Mark Hamill wrote: ‘May The Third Be Absurd.’ 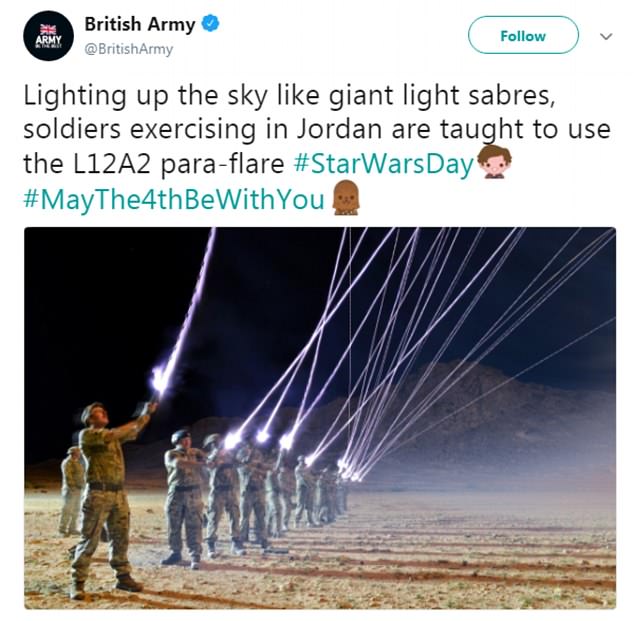 Shine on! The British Army revealed its soldiers’ para-flares aren’t too dissimilar to light sabres 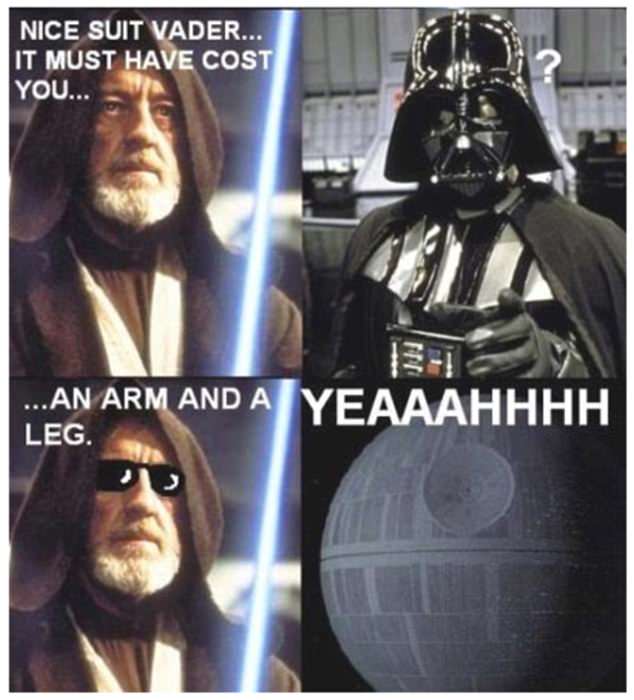 Pun-tastic: One meme showed a stand-off between Darth Vader and Obi Wan Kenobi, where the latter made a quip to when the Dark Lord lost his limbs in battle 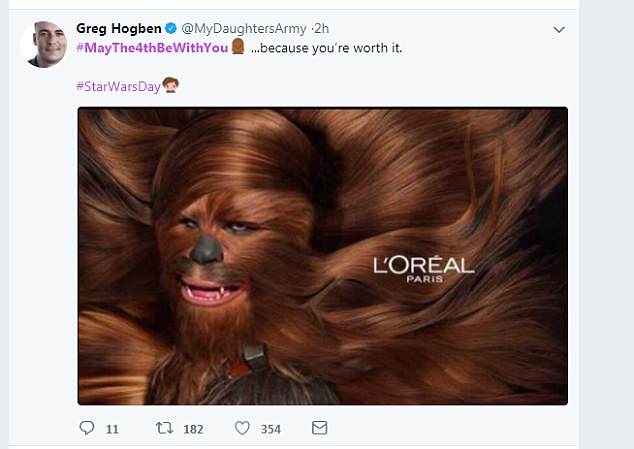 Maybe he’s born with it? One hilarious meme made fun of Chewbacca’s luscious locks by editing him into a L’Oreal advert Join me: Another funny meme made an unlikely link between Darth Vader and Rebecca Black’s song Friday, as the Sith Lord is seen quoting the hit track 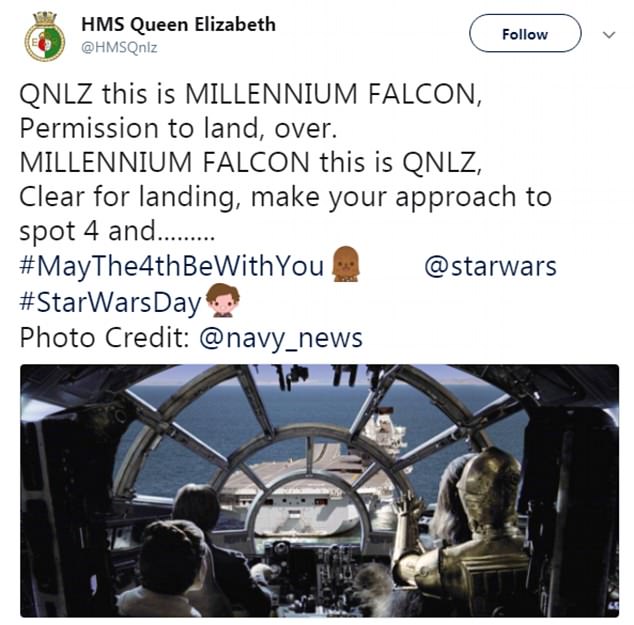 Princess Leia: ‘Aren’t you a little short for a Stormtrooper?’

Darth Vader: ‘I find your lack of faith disturbing’

Luke Skywalker: ‘I’ve got a bad feeling about this’

Princess Leia: ‘Will someone get this big walking carpet out of my way?’

Darth Vader: ‘No, I am your father’

The holiday has been adopted by fans because the date sounds like a pun of the film’s most memorable catchphrase, ‘May The Force Be With You.’

While it is now a tradition amongst sci-fi fans to celebrate the day, it is widely believed that the holiday first came into being on the day that Margaret Thatcher took office as Prime Minister in 1979.

At the time, the Conservative party took out an advert in The London Evening News where they wrote:  ‘May the Fourth Be With You, Maggie. Congratulations’.

However, others claim the event was established in 2008, when Facebook groups celebrated Luke Skywalker Day on May 4 first appeared.

Although the event never truly received widespread recognition, it became popular on college campuses and eventually caught on elsewhere.

The event was soon embraced by Lucasfilm and the first official celebration was held in Toronto, Canada in 2011, marked by costume contests and trivia games.

Now the date is used by fans as a way to show how much they love and cherish all things Star Wars.

The movie, which is the newest film in the ongoing saga, comes out on May 25, while the untitled third film in the sequel trilogy is slated for a December 2019 release. 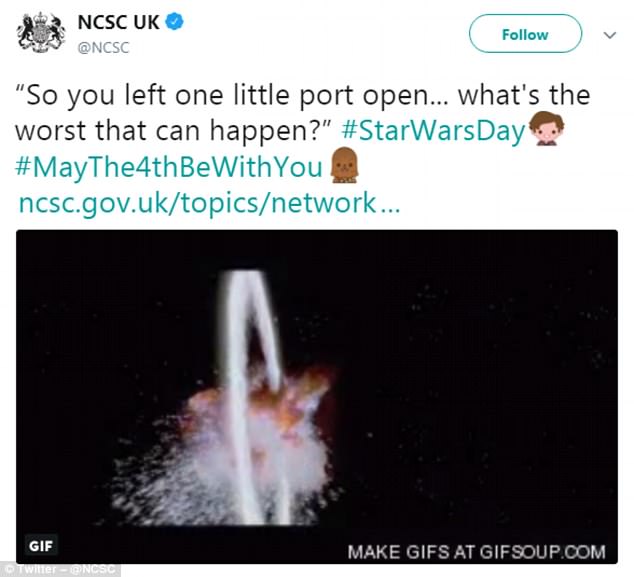 Memes galore: The National Cyber Security Centre also jumped at the chance to share a Star Wars pun or two 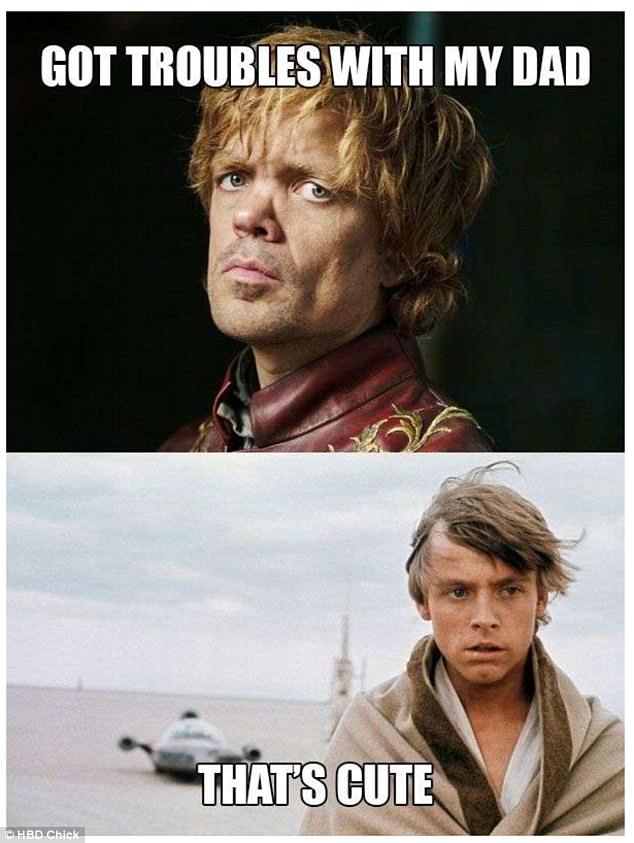 That’s cute: Another great meme sees Peter Dinkladge’s character Tyrion complain about having father issues in Game Of Thrones, which Luke Skywalker then makes fun of 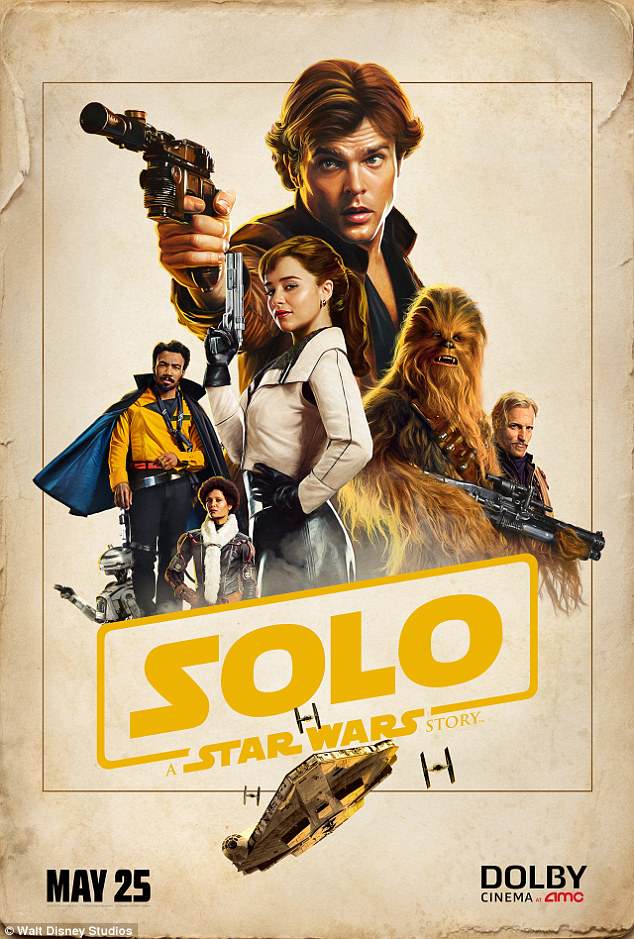 Coming soon: The next film in the sci-fi franchise is the standalone spin-off Solo: A Star Wars Story which comes out on May 25