As Disney’s Star Wars franchise continues to expand at a rate that outreaches its own Clone Army, we’re heading back in time to solve one of the galaxy’s many mysteries.

Alongside the likes of Christopher Lee, Ewan McGregor and Liam Neeson, Samuel L. Jackson was one of the prequel trilogy’s biggest castings. It turns out the Pulp Fiction Star was so big, he even got to pick his own color lightsaber. Posting on Reddit, u/EKRB7 shared footage from when Jackson turned to Lucas and simply asked for a purple lightsaber.

In the short clip, Jackson boldly asks, “Who do you have to talk to about your lightsaber color?” Lucas then tries to deflect the question to explain lightsaber logistics and is quickly rebuffed by Jackson saying, “No purple?”. This is followed by the star’s very own Jedi mind trick as Lucas relents with a simple: “You might get purple”. 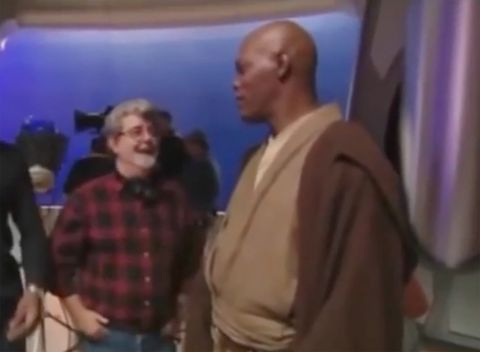 Back when the Star Wars franchise was a youngling, fans were taught that Jedi fought with blue lightsabers and the villainous Sith swung red blades. It was only in Star Wars: Return of the Jedi that Luke was given his new and improved green lightsaber.

Ironically, it originally appeared blue in the trailers and marketing posters, but the production designers decided to make it green to stand out against the blue sky of Tatooine. These days, it seems like it’s a free-for-all on lightsaber colors.

Some background: lightsabers get their power from Kyber crystals (the Empire was robbing them from the Holy City of Jedha in Rogue One). Kyber crystals appear colorless but take on a specific shade depending on their owner’s personality. This doesn’t really make sense when they change hands, but who are we to nitpick?

Over the years, a whole rainbow of these have been added to canon, and at last count, there are eight possible lightsaber colors.

So, just where does Mace Windu’s vibrant weapon fit into the mix? In real-life it was because purple was Jackson’s favorite colour. But in-universe, the purple lightsaber has an actual backstory. The Star Wars Tales comic ‘Stones’ featured Windu having a vision of his signature weapon and traveling to the planet Hurikane to get the necessary parts.

Even though Lucas gave Jackson only a handful of scenes in Episode I, he got to flex his muscles and swing that snazzy saber in Star Wars: Attack Of The Clones. It was during the climactic Battle of Geonosis that Windu really stood out from the crowd, decapitated Jango Fett, and inadvertently set up Boba Fett to be one of the most unconventional fan-favorites of the franchise.

Sadly, Windu met his maker in Revenge of the Sith and was memorably blasted out a window by the villainous Sheev Palpatine. Much like the recent tease of how Luke Skywalker’s famous lightsaber found a new owner, Windu’s weapon seemingly changed hands.

It was never confirmed, but in Star Wars: The Last of the Jedi book series, Senator Sano Sauro was sold a broken lightsaber that reportedly belonged to the fallen Jedi Master. Elsewhere, the complicated lore of Star Wars claims the fact Windu’s purple saber is a mix of red and blue represents the user’s affinity with both the light and dark side of the Force.

Only recently, JJ Abrams rounded off the nine-movie Skywalker Saga with the divisive Star Wars: The Rise of Skywalker. Before the credits rolled, Daisy Ridley’s Rey headed to Tatooine to bury Luke and Leia’s sabers at the Skywalker Ranch, but it looks like she took something from each. The Palpatine outcast formed her own yellow-bladed lightsaber by presumably combining the two Kyber crystals as the ultimate nod to days gone by.

Purple and yellow lightsabers aren’t the only unusual colour combinations. The forgotten Yoda-inspired Yaddle twirled her own orange blade in the expanded universe, and who could forget the ebony Darksaber? Jon Favreau’s The Mandalorian rounded off its gripping freshman season with the jaw-dropping reveal of Giancarlo Esposito’s Moff Gideon slicing his way out a wreckage with the Darksaber in his grasp. 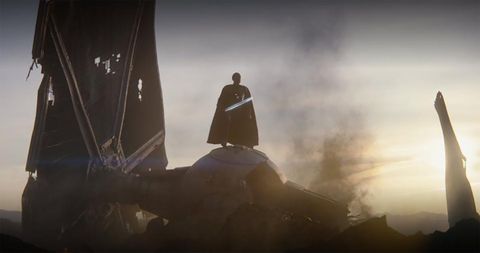 In fact, it seems the ‘new’ era of that galaxy far, far away is obsessed with giving us different colored blades. The release of Jedi: Fallen Order brought orange lightsabers back into canon, and let’s also remember the beloved (but currently MIA) Ahsoka Tano wields a white lightsaber. Still, is anything white as cute as Mace Windu’s Ribena lightsaber? No, we thought not.