First thing’s first, let’s talk about Starbucks’ original Mocha Frappuccino. The delicious bev’ is a blended mixture of mocha sauce, Frappuccino roast coffee, ice, and milk. Plus, it’s topped with fluffy whipped cream (duh). Like I said, it’s basically chocolate dessert in a cup, and it’s perfect for a morning treat or an afternoon pick-me-up. According to Starbucks’ nutrition page, the original Mocha Frappuccino has 110 milligrams of caffeine in a Grande, which makes it even more acceptable to slurp when you’re feeling drowsy. If you haven’t tried it yet, I don’t know what you’re waiting for.

Let’s talk about the delicious details that make Starbucks’ Triple Mocha Frappuccino so much different than the original Mocha Frappuccino. For starters, the Triple Mocha starts with a layer of Starbucks’ new Sweet Cold Brew Whipped Cream (we’ll get into that in just a moment). Then, baristas drizzle a swirl of dark mocha sauce on top of the whip. After the first gooey layer is complete, mocha coffee frappuccino is poured into the cup. Once the frappuccino is poured, the drink is topped off with more cold brew-flavored whipped cream and some dark mocha sauce. This drink has a little less caffeine than the original, coming in at 90 milligrams in a Grande. 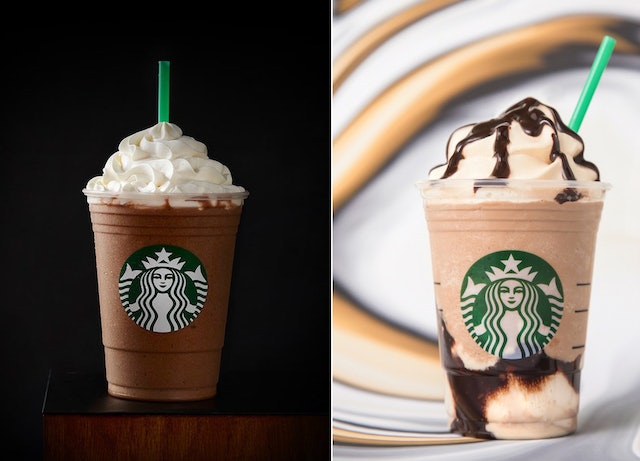 This can mean two things: If you’re craving a sweet pick-me-up (but not too sweet), you can choose the original Mocha Frappuccino. But if you’re longing for an afternoon treat that oozes chocolate goodness, you can opt for the Triple Mocha Frappuccino. It’s a hard decision, I know.

Do you know what makes the decision even harder? Starbucks’ new Sweet Cold Brew Whipped Cream. As previously stated, the new cold brew-flavored whipped cream is layered throughout Starbucks’ Triple Mocha Frappuccino and tastes incredible. (Trust me: After trying it, it’ll be hard to go back to regular whipped cream.) The Sweet Cold Brew Whipped Cream is made daily in Starbucks stores, which makes it even better. To make it, baristas infuse whipped cream with cold brew, white chocolate, and dark caramel. The result is soft, billowing cold brew-flavored whipped cream that’s guaranteed to take any of your Starbucks orders to the next level.