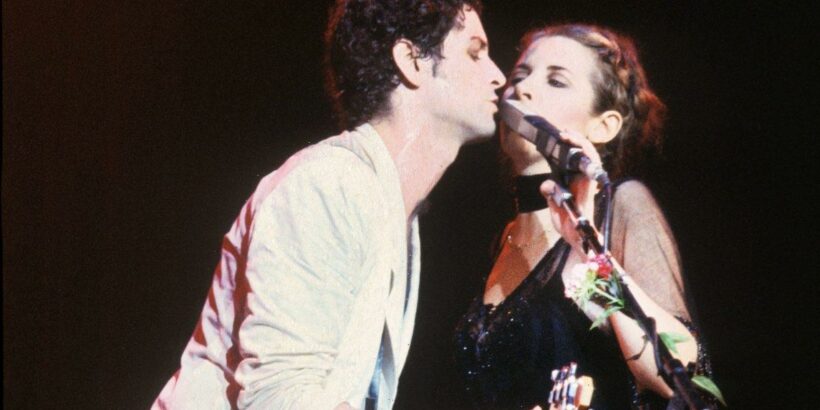 Stevie Nicks joined Fleetwood Mac several months after promising her parents that she would give up music if she didn’t find success soon. She saw the band’s offer as a lifeline. Her boyfriend and musical collaborator Lindsey Buckingham wasn’t so easily convinced, though. Nicks believed their relationship was on its last legs, but she still convinced him to join the band with her.

Nicks and Buckingham were members of the rising Bay Area band, Fritz, before they decided to pursue music as a duo. A record producer believed they had a better chance at success on their own, so the new couple moved to Los Angeles to produce their debut album. They had signed with a record label and were hopeful that this was their big break. Then, their album flopped.

“We were dropped by Polydor after about three months and Lindsey and I were devastated, because we’d just had a taste of the finer things of life, and now we were back to square one,” Nicks said in the book Gold Dust Woman: The Biography of Stevie Nicks.

The floor of excitement dropped out from beneath them, and Nicks had to go back to working waitressing jobs to support them.

“So Lindsey went back to writing his angst-laden songs [like “So Afraid”], and I went back to being a waitress: ‘Can I get you anything? More coffee? Some cake?’ I was all right with that — I didn’t mind being a waitress — but we couldn’t believe it!” she said. “We thought we had made it! Famous people played on our record! We were living the highlife! We were stunned!”

She wanted to join more than Buckingham

The couple already had their problems, and their new situation caused them to fight even more. Nicks began to realize that their relationship wasn’t working out.

“Lindsey and I couldn’t be together [as a couple] and try to work together,” she explained. “It wouldn’t leave us anywhere to go at the end of the day.”

Soon, though, Mick Fleetwood recruited them to join Fleetwood Mac. Though he initially only wanted Buckingham, the couple was a package deal, and Fleetwood agreed to take both. Unfortunately, Buckingham wasn’t sure if he wanted to join. He worried that giving up on their duo, Buckingham Nicks, would be selling out and abandoning all their hard work. Nicks saw things differently.

“We were breaking up when Fleetwood Mac asked us to join,” she said. “And I was working as a waitress to keep our little Toyota running. We weren’t making five hundred dollars a week playing four sets a night at Chuck’s Steakhouse because Lindsey wanted to play original music, so I went along with that.”

She told Buckingham that they had to pull their relationship together to join the band. He argued that they should wait and give Buckingham Nicks another chance.

“I said, ‘You wait around,’” Nicks explained. “‘I’m sick of being a waitress. We are joining Fleetwood Mac, and we are going to be great!’”

Stevie Nicks shared why she stays in Fleetwood Mac

In order to get Buckingham to join Fleetwood Mac, Nicks said they could try it for a year and quit if they hated it. Decades later, Nicks is still a member of the band. The group has had its ups and downs, particularly when it comes to Nicks and Buckingham’s relationship, but Nicks says she doesn’t see herself leaving the band.

“You get to a point in your life where some things have got to go if anything else new is going to come in,” she told Maclean’s. “Then you face the fact that the Fleetwood Mac tickets sold out in three weeks for 80 shows. I don’t want to hurt anybody’s feelings. I don’t want the audiences to be disappointed. I want everybody to be happy. I want the people in Fleetwood Mac to be happy.”