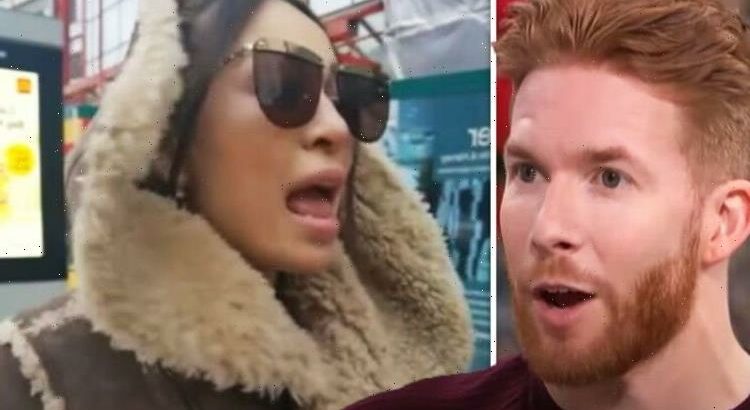 Neil Jones zips Katya in her coat during heated spat

Strictly Come Dancing star Neil Jones has aimed a brutal jibe at his ex-wife Katya Jones after she posted a video referring to him as her “husband”. Commenting on a reel on Katya’s Instagram, pro dancer Neil, 39, was quick to clarify their relationship status after they ended their 11-year romance in August 2019.

In view of her 206,000 followers, Katya, 32, posted a hilarious reel featuring her ex-husband Neil.

The short clip showed Neil zipping up his former wife in her brown shearling aviator jacket.

Making full use of the collar, the dancer fully zipped up the front of Katya’s jacket, leaving her unable to see or speak.

The star could be heard chiding her ex: “I told you, every time when we dance you just…

“Neil! I told you!” she argued as he covered up her face.

A line of text in the video read: “Every man’s dream coat.”

Taking to the caption, Katya poked fun at hers and Neil’s relationship.

She wrote: “How to solve a disagreement!

“Every dance partner/husband wishes for this coat!

“The satisfaction on @mr_njonesofficial face says it all,” she penned alongside a laughing emoji.

Commenting on the video, Neil was quick to remind Katya of their marital status.

Posting a row of laughing faces, he wrote: “You mean ex-husband.”

After spotting the comment, Katya quickly clarified her comments.

She replied: “@mr_njonesofficial I mean dance partner! And any other husbands in the world!”

She later added: “@mr_njonesofficial you were referred to as dance partner!”

Neil and Katya met in 2008, four years later they became engaged and were married a year later.

Six years after marrying in August 2013, they announced that they had decided to go their separate ways.