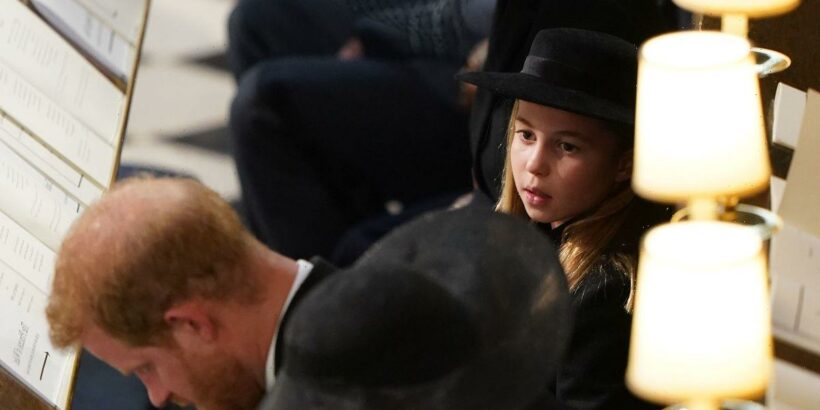 Following thestate funeral of Queen Elizabeth II at Westminster Abbey, her coffin was transported by the state hearse to Windsor Castle.

Before she islaid to rest alongside Prince Philip, the late monarch had acommittal service at St George’s Chapelthat was attended by the royal family.

During the servicePrincess Charlotte, who was seated beside her unclePrince Harry, shared a sweet moment with her father’s brother.

As the choir sang, seven year old Charlotte readjusted her hat before looking over at her uncle. Harry, 38, then briefly looked up and caught her eye and smiled at the princess.

The moment was noticed by royal fans who took to Twitter to share their emotions of the sweet moment between uncle and niece.

One wrote: “I thought I just caught a little exchange between Harry and Charlotte. I hope someone captures it on camera [crying emoji].”

While a third added: “Harry and Charlotte sharing a little moment while the choir sings. So sweet”.

Princess Charlotte was joined by her brotherPrince Georgeat the funeral and the two young royals walked behind their great grandmother’s coffin as it entered Westminster Abbey for the funeral.

Charlotte and George, nine, took their places walking alongside their mumKate Middleton, 40, andQueen Consort Camilla, 75, while his grandfatherKing Charles III, 73, and fatherPrince William, 40, walked behind the monarch's coffin.

Charlotte wore a black coat dress with pleats at the back and a small silver horseshoe pinned on the front. She also wore a black hat that sweetly matched her mum's choice of headwear.

Kate opened up about her children’s reactions to their great-grandmother’s death as she spoke to Governor-General of Australia David Hurley at a reception at Buckingham Palace yesterday.

The Princess of Wales said that the young Prince Louis was struggling to understand things.

Recalling what she told him, the Governor-General said: “The younger one is now asking questions like, 'do you think we can still play these games when we go to Balmoral?' and things like that, because she's not going to be there.”

However she said George, who will one day be King, is "sort of now realising how important his great-grandmother was and what is going on".