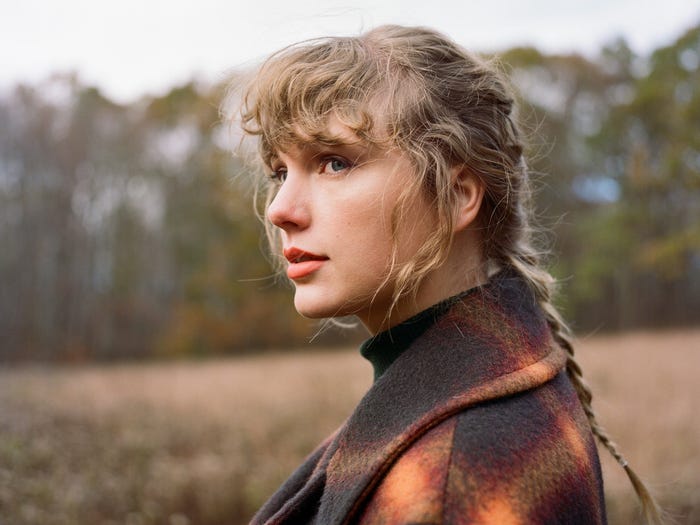 When Taylor Swift announced that she was dropping her ninth studio album "Evermore" on Thursday, she introduced it as a "sister record" to its predecessor "Folklore."

But after listening to the 15-track album, fans noticed similarities between "Evermore" songs and music that Swift released long before "Folklore."

Honing in on the Grammy-winning artist's past albums, like "Taylor Swift," "Red," "Reputation," and "Lover," fans mashed up "Evermore" songs with Swift's older hits.

Even though "Folklore" and "Evermore" seem to mark the beginning of a new era in Swift's career, the fan-created remixes that fuse together her various projects prove that she's kept elements of her artistry consistent throughout her discography.

Here are some of the most impressive mashups.

Not only are 'Champagne Problems' and 'All Too Well' both breakup tracks, but fans showed they also flow well together

"Champagne Problems" from "Evermore" is about an engagement that falls through, while "All Too Well" from "Red" delves into a devastating breakup.

Thematically, the two songs carry many of the same themes. After fans played them together, they proved that they actually work together musically as well.

They also mashed up 'Champagne Problems' and 'New Year's Day'

As Insider's music editor Courteney Larocca noted in her "Evermore" review, the piano keys at the beginning of both "Champagne Problems" and "New Year's Day" from "Reputation" are strikingly similar.

Fans picked up on the matching chords and put them together.

One fan even incorporated "Back to December" from "Speak Now" and "Cornelia Street" from "Lover" into the mix.

Since Swift has mentioned marriage in multiple tracks, including 'Willow,' someone compiled a wedding song

A pianist shared a wedding song using parts of "Love Story, " "State of Grace," and "Willow."

Seeing as you guys have been digging the wedding mashups, here’s one for the Swifties! 🎶 ##taylorswift ##evermore

One person combined the 'Ready For It' and 'Willow' music videos

Even though the aesthetics are completely different in the music videos, they created an entirely new narrative when they were put together.

'No Body, No Crime' made fans think of 'Should've Said No' and 'I Did Something Bad'

"No Body, No Crime" draws back to Swift's country roots, so it makes sense that a fan showed off the track's similarity to "Should've Said No" from the album "Taylor Swift."

Este’s storyline has been playing out since Taylor’s FIRST album. The mashup we all needed. ##evermore ##nobodynocrime ##taylorswift ##mashup

Another person meshed it with "I Did Something Bad," a high-energy track from "Reputation."

ok but these two together … can someone make a full mashup PLS (idea from: @itsgraysonlynn) ##taylorswift ##evermore ##nobodynocrime ##taylor

Looking back to Swift's 'Red' era, a fan dueted Swift's 'Evermore' with lyrics from 'State of Grace'

She sang "State of Grace" over Swift's "Evermore" lyrics.