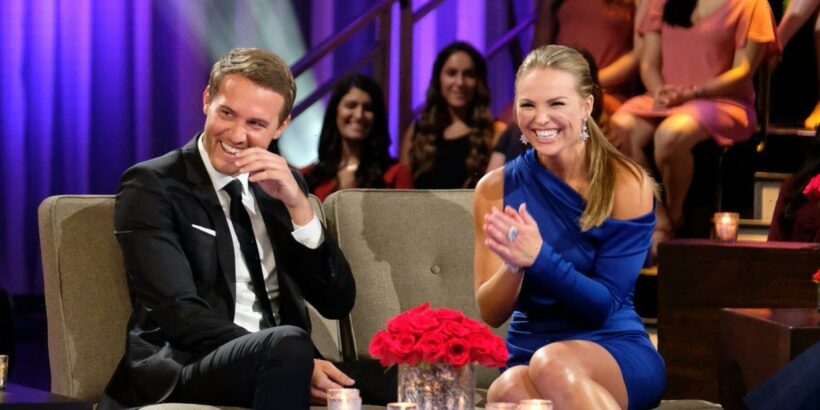 During a recent appearance on Us Weekly’s Here for the Right Reasons podcast, Weber revealed that he was super close to walking away from his Bachelor season very early on in the process — and it all would have been for his ex Hannah Brown had he done so.

Remember when Brown showed up during Weber’s Bachelor season to host a group date? Well, it turns out a lot went on between the two behind the scenes that is now coming to light.

In the premiere episode of his season, the former Bachelorette arrived in a limo to return Weber’s pilot wings, which he gave her on the first night of her season.

Brown then showed up again during a group date as the host (along with a windmill). But backstage, things got emotional when the pair had a deep conversation about their feelings for each other.

Eventually, Brown ended up in Weber’s lap and they seemed to share an intimate moment, almost kissing at one point. But nothing happened. Afterward, Weber said, “I can’t do this,” before pulling away.

Weber and Brown then hugged before she left for good, and he continued on with his season.

While joining his Bachelors in the City co-host Dustin Kendrick on a recent episode of Us Weekly‘s Here for the Right Reasons podcast, Weber revealed that a lot more went down between him and Brown that fateful night that wasn’t caught on camera.

The pilot began the conversation by recalling the moment leading up to Brown’s appearance on his season.

“I remember the first time that she showed up on my season was the first night with all the limos,” Weber shared. “That limo showed up and it just sat there for, like, 15-20 minutes. No one got out. And I’m just standing there. No one’s coming up to me — obviously, they don’t show this part. But I’m just, like, there waiting, like, ‘OK, when’s the door gonna open? What kind of surprise is it gonna be?’ No producers are coming up to me or anything.”

When the former Bachelorette stepped out of the limo, Weber was in complete shock.

“At first, I was like, ‘There’s no way that’s Hannah, like, there’s no way.’ [I thought] it was a look-alike,” he continued. “I thought it was just this gorgeous girl and then I realized her smile. That bright smile, like, that’s Hannah Brown, holy shit.”

Following their emotional/ tense conversation backstage during the group date, Weber says he seriously considered quitting the show to be with Brown.

“I was an idiot, producers probably hated me, but I literally, like, I think they edited this part out, I was like, ‘I’m gonna leave the show, like, if you want to, if you want to give this a shot, I’ll leave right now,’” he recalled. “And she’s like, ‘You can’t do that, Peter, you’re the Bachelor, you signed a contract.’ I’m like, ‘No, like, I’ll do it. What are they gonna do to me?’ I don’t know what I was thinking that day. I was very confused.”

Peter Weber ended up continuing on with his season

In the end, Weber decided against quitting and went through with the rest of his season.

Fans watched as he went on to make connections with several women but ended up choosing Hannah Ann Sluss during his season’s finale. Unfortunately, their romance didn’t last long as Weber called off their brief engagement while the season was still airing.

The pilot then reunited with runner-up Madison Prewitt on The Bachelor: After the Final Rose, but the two never rekindled their romance.

After Prewitt, Weber dated contestant Kelley Flanagan for nearly a year before they went their separate ways in February 2021.