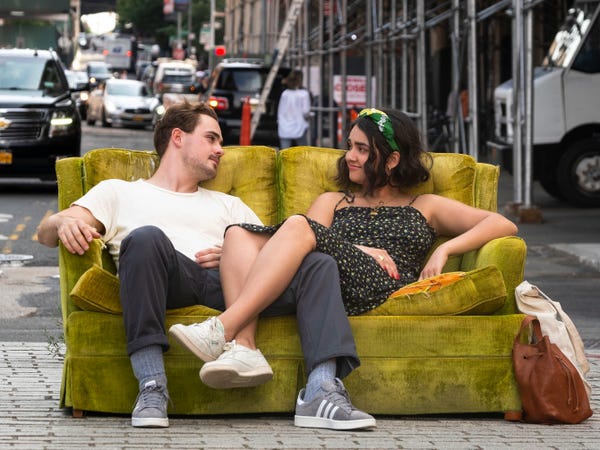 The new rom-com, "The Broken Hearts Gallery" (in theaters and drive-ins Friday), delves into what life is like looking for love in your 20s, and you can thank Selena Gomez for contributing to the movie's authenticity.

Director Natalia Krinsky told Insider that the superstar, who is an executive producer on the movie, was instantly taken by how the movie deals with a bad breakup.

"She read the script a couple of years ago and really responded to it," Krinsky said. "We met and had an amazing collaboration where we spoke about breakups — she's suffered a few in her day — and she really had keen observations. That only enriched the script."

Through the years Gomez has been famously linked to Justin Bieber and The Weeknd.

In the movie, Geraldine Viswanathan ("Blockers," "Bad Education") plays a twentysomething Brooklynite who loves to keep items from past relationships as keepsakes. After her latest breakup, she decides to collect them all and make an art exhibit with them, causing a viral sensation as other people want to contribute to it.

To support the movie, Gomez filmed a brief video introduction before the movie plays, but Krinsky said that wasn't all.

The director said Gomez's greatest contribution was her input on how young women hang out these days.

"The things that establish those bonds of friendship are like sitting around your apartment and drinking wine and eating out of the same pot of pasta, just kind of hanging out," Krinsky said.

"We talked a lot about that. Just being with your friends. I made sure to keep that stuff in the movie."