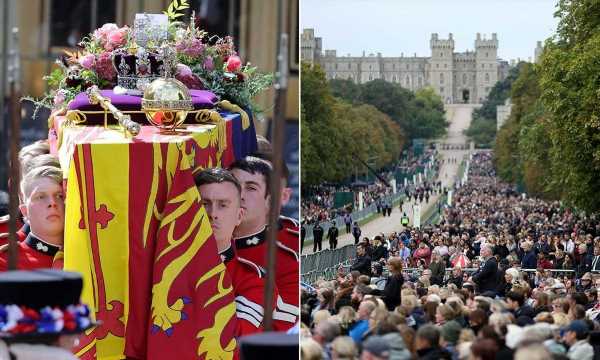 The royal family will bid a farewell to the Queen at the committal service at St George’s Chapel in Windsor.

It follows Monday morning’s moving funeral service at Westminster Abbey in London, which also saw over 2,000 guests in attendance.

Thousands of mourners have lined the Long Walk in Windsor to say their goodbyes to Queen Elizabeth II, who reigned for 70 years.

WATCH: Most moving moments from the Queen’s state funeral

The Queen Consort, the Princess of Wales, the Countess of Wessex and the Duchess of Sussex will arrive at the service at 3.25pm by car, along with Princess Beatrice, Edoardo Mapelli Mozzi, Princess Eugenie and Jack Brooksbank.

MORE: Watch: Royals including Prince George and Princess Charlotte sing God Save the King for the first time at Queen’s funeral 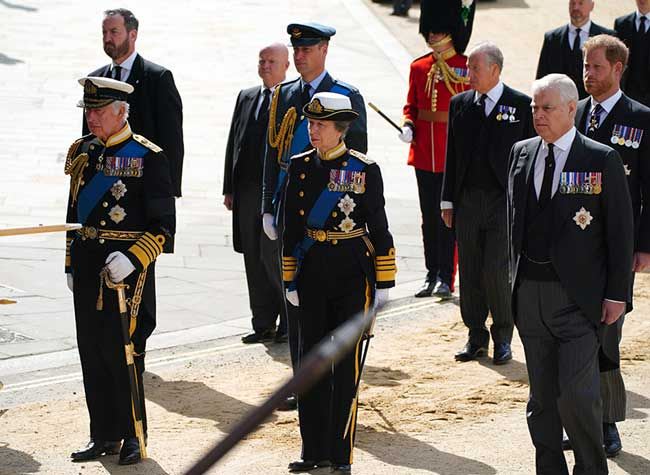 King Charles and senior royals in procession from Westminster Abbey

The bearer party will lift the coffin from the hearse and it will be carried in procession up the steps into St George’s Chapel before the committal service.

The State Hearse will halt at the bottom of the West Steps at 3.53pm before the Coffin Procession enters the Chapel. The Service will be led by The Right Reverend David Conner, KCVO, Dean of Windsor.

Thousands gather on the Long Walk at Windsor

After the royal family has been seated and the Queen’s coffin has moved into Procession to the Quire, Psalm 121 will be read and the Choir will sing. After the prayers and hymns, the Dean of Windsor, will do a Reading of Revelation 21.1-7. Other ministers will read various prayers, including The Lord’s Prayer.

There will then be a Committal where the coffin is lowered as the Dean of Windsor reads The Psalm, 103. 13-7. Shortly after, the Archbishop of Canterbury pronounces the Blessing.

The King and members of the royal family will depart from the Galilee Porch for Windsor Castle once the service concludes.

The Dean of Windsor will later conduct a private burial service attended by the King and members of the royal family at 7.30pm.

The Queen will be buried with the Duke of Edinburgh at King George VI Memorial Chapel.

Make sure you never miss a ROYAL story! Sign up to our newsletter to get all of our celebrity and royal news delivered directly to your inbox.