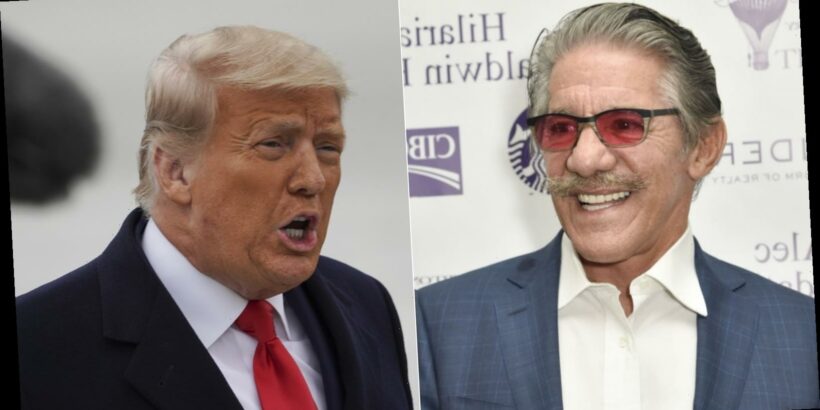 Conservative pundit and journalist Geraldo Rivera has become yet another one of President Donald Trump’s closest allies — one of his closest allies in the media, at least — to call for his impeachment in the wake of Jan. 6, 2021, in which hundreds of right-wing insurrectionists stormed the Capitol Building after attending a rally thrown by the lame duck president. In what many have condemned as a failure to quell the rioters from subsequent violence, Democratic lawmakers at Congress presented articles of impeachment against Trump on Jan. 11, 2021, which Rivera, in a shocking twist, publicly stated his support for on social media.

Rivera had seemed like a die-hard Trump loyalist until the bitter end. Following Trump’s defeat to President-elect Joe Biden in November 2020, the former talk show host had previously tweeted about his backing of Trump after recapping a personal phone call he had with the outgoing president in the days following his lost re-election bid. Calling Trump a “realist” and “a heavyweight champion…determined to fight on” while also echoing allegations of voter fraud (which has been thoroughly debunked), it seems like Rivera has, months later, finally changed his tune. So what finally caused Geraldo Rivera to make such a drastic turnaround? Scroll on to find out.

In a series of tweets Geraldo Rivera posted to his social media account on Jan. 12, 2021, the regular Fox News contributor and correspondent openly derided Donald Trump, who he described as a “loyal friend” and a confidante, for his purported role in the riots on Jan. 6, 2021, further stating that it constituted grounds for a second impeachment. (As of the time of this writing, Trump has become the first president in U.S. history to have incurred impeachment twice.)

“A loyal friend, hounded without mercy by Democrats intent on destroying him from Day 1,” tweeted Rivera. “Then he lost the election. It made him crazy or revealed a dysfunction I had refused to see,” admitted Rivera. “He then unleashed a mob to make war on their own government. 5 to their doom. @LizCheney is right,” he then added, referring to similar comments House GOP chair Liz Cheney made less than 24 hours before.

Later calling Trump’s actions “inexcusable,” Rivera went on to lambast other bad actors in the events leading up to the Capitol Hill insurrection. “#DonaldTrump #DonaldTrumpJr #RudyGiuliani were complicit in unleashing snarling, seething, shouting mob that invaded & defaced the Capitol,” Rivera then tweeted, calling out not only Trump, but his son, and personal lawyer for inciting the mob on Jan. 6, 2021. “They must apologize-show contrition for grievous loss of life & pain inflicted.” Both spoke at the rally alongside Trump.

While some of Donald Trump’s closest allies have since spoken out against the president following the Jan. 6, 2021 event at the Capitol, Geraldo Rivera (pictured above with Donald Trump during the president’s Apprentice days) and his remarks calling for Trump’s impeachment have, by and large, been considered unprecedented. As recently as September 2020, Rivera spoke highly of Trump, a man he previously described as a “loyal” friend and who he interviewed upwards of 30 times throughout the years, in an interview with People magazine. While Rivera was quick to note that he didn’t always “agree” with Trump’s political views, he described himself as a Trump supporter in general.

“I support the president, but I don’t endorse the president…he doesn’t always heed my advice,” Rivera told People at the time. “But I’m honored that the President of the United States, the most powerful person on earth, listens to a [guy] that’s been knocking around television for half a century.”

While Rivera has criticized the president before, this is the first time the journalist has broken rank with Trump to such an extreme degree.  Notably, Rivera condemned Trump in comments made to The New York Times in 2019, after Trump verbally attacked congresswomen Alexandria Ocasio-Cortez, Ilhan Omar, Rashida Tlaib, and Ayanna Pressley — all of whom are women of color — which prompted Rivera to admit Trump’s words “made it impossible” to defend Trump against allegations of racism.