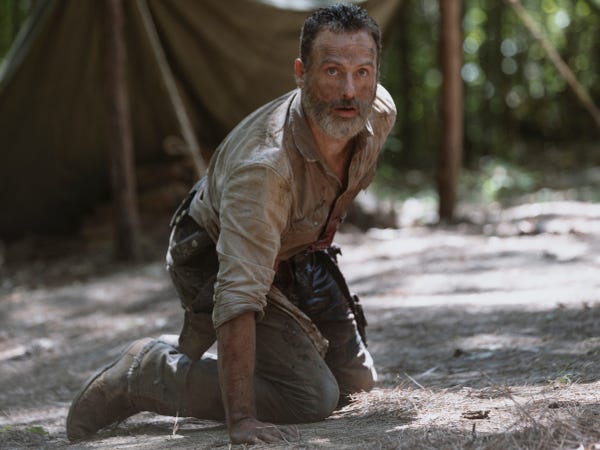 If you're wondering what's going on with these Rick Grimes' "Walking Dead" movies, Scott Gimple, the chief content officer of "TWD" universe, tells Insider they're hopeful that we're still getting three films.

"We live in a world where everything is changing moment to moment. That said, [it's] still a theatrical movie, still hoping to be a trilogy," Gimple told Insider on Wednesday when asked if it's correct to still refer to "TWD" films as a trilogy.

When Rick (Andrew Lincoln) left "TWD" in 2018, AMC announced a trilogy of movies centered around his character written by Gimple.

We haven't heard much about three films in a while. But in a recent press release announcing the final 11th season of "TWD," AMC referred to a singular feature film in production with Universal and Skybound alongside the network.

Fans can also expect more personal touches on the script from "The Walking Dead" creator Robert Kirkman. During 2019's virtual San Diego Comic-Con, Kirkman previously announced he was working closely on the film with Lincoln.

When asked if Kirkman is currently working on the script, Gimple told Insider, "Yes."

"I will say that Robert [Kirkman] has said that we're taking this time to really hone up our script and our ideas," Gimple said.

"Robert is super involved. Andy [Lincoln] is super involved," Gimple continued, adding that Lincoln has the best update on it of anyone. "We're using this time we have to sharpen and heighten [it.] Movies are a much longer process than TV. And, luckily for us, we have a little bit of time to be super deliberate about it because the fans deserve that."

A request for comment from AMC was not immediately returned.

We'll have more from our conversation with Gimple as the week continues. You can follow along with our "Walking Dead" coverage here.