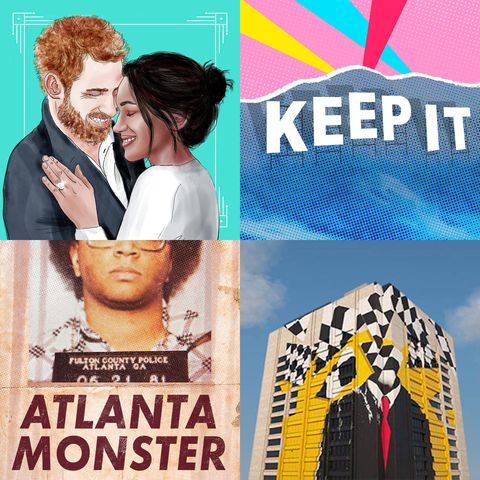 There truly isn’t enough time in the day to fully appreciate all the great podcasts out there. In addition to the usual, fantastic genres — true crime, love — this year’s lineup of the best (so far) includes one that all royal enthusiasts will love. Below, in no particular order, what you should be listening to in 2018:

Former music video director Payne Lindsey took on the near impossible task of diving deep into the nearly 40-year-old case of the Atlanta Child Murders for this new podcast, which premiered in January. Lindsey, of Up and Vanished fame, teamed up with HowStuffWorks to bring 10 chilling episodes that examine the deaths of 28 young African Americans, most of whom were male.

Film discussions are always more fun when the right people are involved in the conversation. April Wolfe, former LA Weekly film critic, is one of them, and on each episode of Switchblade Sisters, horror, sci-fi, exploitation, and other classic genre movies are closely examined from a female perspective with some help from the likes of director Karyn Kasuma (Jennifer’s Body), writer Jessie Nickson-Lopez (Stranger Things), and actress Heather Graham. In January, Wolfe told Cosmopolitan.com, “Not everyone loves gory stuff, not everyone loves violent things, not everyone loves action sequences or thrillers or ghosts, but this is one place where all of that is OK to like and you’re not judged for it and we analyze it.”

3. Why Won’t You Date Me Listen Here

New episode of my podcast Why Won’t You Date Me is out today! My amazing guest @eskinz she’s so funny and got me on Raya an exclusive dating app that I’m 100 percent sure is racist 🤷🏿‍♀️🤪

No one was more excited about Prince Harry and Meghan Markle’s wedding than the hosts of When Meghan Met Harry, a podcast dedicated to the royal couple and the latest headlines about their nuptials. Each week, James Barr and Kristen Meinzer broke down all things royal and occasionally invited equally enthusiastic voices, like a crown jewels historian and royal astrologer. If you only have time for one episode, try “The Royal Hen and Stag Parties.”

If you love true crime and rock and roll, musician Jake Brennan is your guy. If you’ve long been intrigued by the rumor that Jerry Lee Lewis killed his wife or that Beck producer Jeremy Blake’s death had something to do with the Church of Scientology, run — don’t walk — to the latest episodes of Disgraceland. As Brennan writes on the podcast’s official website, this isn’t for those interested in “sit around the campfire” storytelling.

This podcast from the folks of Bust is offered twice a month and features refreshing discussions with women in pop culture. Whether it’s TV shows, movies, or other podcasts, editors Emily Rems and Callie Watts and their guests know what’s up.

7. This Is Love Listen Here

Phoebe Judge, who’s already made waves with Criminal, is also the host of This Is Love, a podcast that explores that very topic, love, and all the sides that are rarely discussed: the bad and the ugly. As she says in the show’s intro, a simple act of love “isn’t always pretty or grand and doesn’t always make things better, but can change the course of it all.”

If Zombies, Run! actually made you run, The Walk, from the same creators, will make you cover as many miles, only this time, you’re operating at a much slower pace. You begin in Scotland, where you are mistakenly identified as someone who must deliver a mysterious package to Edinburgh. As you board the train, it blows up and surprise, surprise — you have to walk. If you’re scared of gunshot noises and loud sounds, you might want to turn the volume down as you cover an estimated one to two miles per episode.

If you need a break from the current political climate and would like to relive the olden days of Barack Obama, Making Obama is your podcast. Following the success of Making Oprah, WBEZ unleashed in February an illuminating six-part series on the 44th President and how Chicago shaped his journey to the White House.

If you’ve never heard of Franklin Jones, let producer and host Jonathan Hirsch tell you. His parents were followers of Jones, a controversial guru who was accused of brainwashing, sexual assault, and other wrongdoings in the mid-1980s. Through journals and notebooks his parents kept from that time, Hirsch takes a serious look at whether or not he and his family were really part of a cult.

Over 13 episodes, documentary maker Jennifer Ford and investigative journalist Sam Bungey explore the unsolved 1996 murder of Sophie Toscan du Plantier, a French film producer whose body was found at the bottom of her vacation home days before Christmas in picturesque West Cork, Ireland.

Radiotopia’s third offering under the Showcase umbrella is Secrets, a six-episode investigation into the age-old question of why people lie. Whether it’s family secrets, an identity crisis, or a fake health issue, hosts Martin Johnson and Mohamed El Abed break down the art of lying with special guests. The topic also hits close to home for El Abed, who found out at the age of 12 that he had a secret older sister while on his way to his mother’s memorial service.

While this isn’t the newest kid on the block, Teen Creeps deserves your undivided attention and enthusiasm if YA pulp fiction is something that’s still in your rotation. If you love R.L. Stine, Ann M. Martin, or Dhonielle Clayton, comedians Kelly Nugent and Lindsay Katai have your back, along with a well-organized reading schedule for a book club you wish you had when were young and always reading.

Long before Queer Eye, Jonathan Van Ness took deep dives on things he was well, curious, about through his podcast, Getting Curious. With the success of the Netflix series, which is currently filming its third season, JVN’s weekly sermon has become the go-to place for fans old and new. Topics have ranged from the serious (how the GOP are planning to keep the Democrats out of the midterm elections) to the creepy (what makes a cult a cult?) to the important (the origin stories of all his Queer Eye cast mates). Warning: the catchy AF theme song will definitely make you get up and dance, so make sure you have the space for it.

If the women of Big Little Lies hosted a podcast, what would it sound like? Maybe Gossip, a 12-part fictional narrative podcast, aka a comedic soap opera podcast, from bestselling author Allison Raskin. Gossip follows three “unlikely” female friends who meet weekly over coffee to share the latest—you guessed it—gossip (think infidelity, murder) brewing in their town of Golden Acres. The rest of the cast includes Victoria Rowell (The Young and the Restless), Beth Littleford (The Daily Show), and Peter Mackenzie (Black-ish).

Caliphate is more than a podcast about ISIS. Courtesy of the New York Times’ foreign correspondent Rukmini Callimachi and producer Andy Mills (The Daily), the 10-episode series dives deep into the question of “Who are they, really?” Related: Who are we fighting? What does a recruit look like in 2018? And what is it like to report on the terrorism beat?

If you’re familiar with the Siris and Alexas of the world, Sandra should take no time getting used to. Kristin Wiig, Alia Shawkat, and Ethan Hawke star in this fictionalized series about a girl who works for the company behind Sandra, “everyone’s favorite A.I.” Shawkat is Helen, who is responsible for meeting the everyday demands and inquiries of Sandra patrons, who have no clue Sandra—all hundreds and thousands of her—is real. If you need more convincing that this is pure entertainment gold, Sandra is already being developed into a TV series.

Welcome to Cleveland, home of the Cavaliers, the Rock and Roll Hall of Fame, and the third season of Sarah Koenig’s uber popular podcast series, Serial. Unlike the first two seasons, where Koenig and company focused on one case at a time (and the persons involved), season three takes listeners inside the criminal justice system via courtrooms, hallways, judges’ chambers, prosecutors’ offices, homes, prison. The result is nothing short of spectacular.

Fans of 2017’s Dirty John (soon to be your fave Bravo show starring Connie Britton) will surely find it hard to stay away from Dr. Death, which centers around yet another charismatic, twisted man. Instead of Newport Beach, listeners will find themselves in Dallas, where neurosurgeon Christopher Duntsch performed more than 30 botched surgeries between 2011 and 2013. Over six episodes, journalist and host Laura Bell explores how the medical system made it possible for someone like Duntsch to slip through the cracks. (He was sentenced to life in prison in 2017.)

There’s no better way to wind down than with writers Molly Lambert, Tess Lynch, and Emily Yoshida, hosts of Night Call, “a podcast for your strange days and lonely nights.” Maybe the opening of each episode makes you feel like you’re part of a serious investigation (should you start recording audio notes with time stamps as well?), or perhaps you find comfort in any of the following topics: cheese, sharks, The Haunting of Hill House.

Ira Madison III’s Twitter followers should be familiar with his popular catchphrase by now, so it’s only fitting that his podcast (from the folks at Crooked Media) is named Keep It. There’s no better time than now to have smart discussions about what happens when pop culture meets politics (think Megyn Kelly’s Halloween disaster, the Super Bowl halftime show, and Taylor Swift’s call for her fans to vote). Thank goodness for Ira.

22. Ghost of a Podcast Listen Here

Let Jessica Lanyadoo, astrologer, psychic medium, and animal whisperer guide you weekly with your horoscope and other practical advice. This isn’t a regular astrology podcast—it’s a cool podcast.