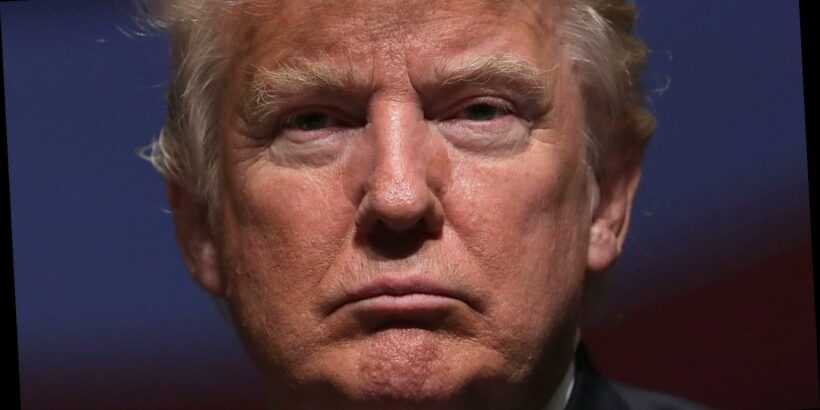 Donald Trump has teased a possible attempt to return to the White House in the wake of President Joe Biden succeeding him following the 2020 election, but there are two women that could complicate things for the controversial businessman. Trump has yet to explicitly confirm if he really will run again in 2024, but he most definitely hinted at the possibility while speaking to his supporters in February 2021.

After remaining under the radar following Biden’s inauguration in January 2021, Trump said during a speech at the Conservative Political Action Conference (CPAC) in Florida (per Sky News), “I stand before you today to declare that the incredible journey we began together… there’s never been a journey so successful — we began it together four years ago and it is far from over.” He also reaffirmed his allegiance to the Republican Party and made it clear that he had no plans to start another party by stating, “We’re not interested in them.”

But if Trump really does run for president again in 2024, Sen. Lisa Murkowski and his daughter-in-law, Lara Trump, could make things pretty difficult for him. Keep reading for all the details.

As reported by The Hill, Sen. Lisa Murkowski of Alaska could complicate Donald Trump’s possible return to the White House. Murkowski is the only senator up for re-election who voted to convict Trump during his second impeachment trial.

“I have reached the conclusion that President Trump’s actions were an impeachable offense and his course of conduct amounts to incitement of insurrection as set out in the Article of Impeachment,” she said in a January 2021 statement. Murkowski accused Trump of “stating repeatedly that the election was rigged, casting doubt into the minds of the American people about the fairness of the election” in the wake of the storming of the U.S. Capitol building.

Unsurprisingly, Trump was unhappy with Murkowski’s decision to vote for impeachment. In a statement obtained by Politico in March 2021, he vowed to campaign against her amid her bid for re-election and called her a “failed candidate.” He added, “She represents her state badly and her country even worse. I do not know where other people will be next year, but I know where I will be — in Alaska campaigning against a disloyal and very bad Senator.”

However, in her political career, Murkowski’s only loss was the 2010 Republican Senate primary, though she then won as a write-in for U.S. Senate, marking only the second time in U.S. history that that has happened. Should Murkowski win again, it could be a big blow for Trump.

How a loss for Lara Trump could bring Donald Trump down

Lara Trump is aiming to succeed retiring Sen. Richard Burr in the 2022 North Carolina Republican primary, per The Hill. Lara, who is the wife of Donald Trump’s son Eric Trump, is offering up a big test on just how popular the Trump name is with her candidacy, as whether or not she wins could play a big part in how strong the family moniker is going into the 2024 presidential campaign.

Lara does not yet seem as popular as her father-in-law, Donald. In a December 2020 poll, she led at 24 percent, per The Hill. However, the outlet also reported that “the GOP preference for president had Donald Trump at 76 percent,” suggesting a lot of those who supported her father-in-law are not completely sold on transferring their support to her yet.

The site noted that, even if Lara does win in North Carolina, if it’s anything other than a big victory, it “would be a serious problem” for the Trump family and could create serious cracks in the family’s facade. It could seriously chip away at Donald’s previous claims of unwavering support from his dedicated followers and, therefore, could hurt his chances of potentially heading back to the White House in 2024.