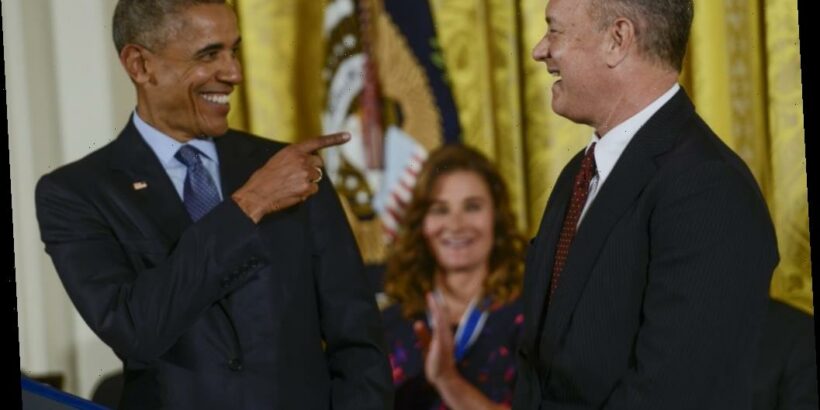 Hanks even witnessed former President George W. Bush using his bare hands to toss a dead bird into the rose garden. That moment happens to be his most fond memory of his many visits to the White House.

Tom Hanks visited the White House on many different occasions

In the early 90s, Tom Hanks stayed in the Lincoln Bedroom as a guest during President Bill Clinton’s administration. The actor doesn’t recall a lot from that period except his discovery that the White House press gallery had a pitiful looking coffee machine. Hanks later gifted the press correspondents an espresso machine and continues that tradition today.

During President Barack Obama’s administration, Hanks was awarded the Presidential Medal of Freedom for his pioneering work in the arts. The ceremony was held in the East Room of the White House on Nov. 22, 2016. While that moment must have been a fond memory, Hanks’ favorite White House memory happened during George W. Bush’s administration.

During one visit to the White House in 2004, Hanks and his wife, Rita Wilson, were visiting for the World War II Memorial’s dedication. During an interview with In-Depth With Graham Bensinger, Hanks told the story of how his wife ran into President Bush on his way to the gym.

“I sat next to [the President], and we chit-chatted a little bit during the ceremony,” Hanks began. “It was out on the mall. My younger kids had never been in the White House, so we arranged for a tour. It was a Sunday, so it was a day off.”

While touring the White House after the ceremony, Hanks explained that the secret service had them clear the hallway because the President was heading somewhere. However, Wilson had gone to the restroom. When she came out of the bathroom, she ran into President Bush in his gym clothes.

“‘Well, hello! Who are you?’” Hanks recalls the former President asking Wilson.

After the President realized who Wilson was, he took the entire Hanks family on an informative tour of the Rose Garden.

“We went outside,” he continued. “We walked around the lawn. He showed us the trees that the Presidents had planted.”

Then he describes the ridiculous moment with the dead bird.

“I swear to God, there was a dead blackbird laying in the grass,” Hanks explained. “He picks up the bird with his bare hands and says, ‘that’s a shame. We got these all the time in the ranch.’ And he threw the blackbird in the bushes.”

Then the President took the Hanks family into the Oval Office through the back door. Hanks describes the entire meeting as “really a fantastic day that happened totally by accident.”