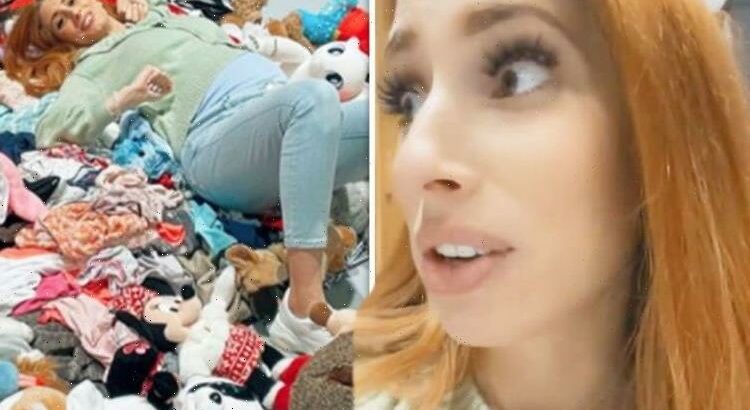 Loose Women panellist Stacey Solomon, 31, has defied the rules about revealing secrets from her BBC series Sort Your Life Out, by giving her 4.6 million Instagram followers a glimpse into the final episode. The star, who is pregnant with her fourth child, cheekily admitted she took the risk “because it’s the last episode and I feel like they can’t sack me now”.

While whispering to keep her filming activities under wraps, Stacey revealed what she was up to behind-the-scenes at a warehouse.

She said: “I’m just at the warehouse about to sort through the books.

“And I just thought I’m going to show you some of it because it’s the last episode and I feel like they can’t sack me now!”

Stacey explained further in the caption: “They’ve not let us show anything the whole series.

“But it’s the last episode so I’m going to show you some bits because hopefully it’s too late for them to sack me at this point,” she added, alongside a laughing emoji.

The mum-of-three then revealed that the floor of the warehouse was covered in a collection of the family’s books.

She explained: “So it starts off all neat like this and we go through it all and try and let go of half – the books section – I’m not excited about that!”

Stacey went on to gush over the dolls that were about to be sorted through by herself and the team in the warehouse, as she is preparing to welcome her first daughter with fiancé Joe Swash.

She exclaimed: “All the dolls that I might actually get a chance to buy again!”

Stacey then got distracted by the make-up and toiletries.

She continued: “Probably one of my favourite sections to go through!

“I love sitting and looking at other people’s make-up and toiletries.”

The presenter picked up a perfume from the collection and couldn’t resist sampling the scent.

“Ooh don’t mind if I do,” she giggled, while spritzing herself with the perfume.

Stacey went on to post a photo of herself relaxing on top of a pile of toys and children’s clothes.

She penned alongside the snap: “Warehouse day done.

“These are definitely the hardest days in the show but there’s no better feeling than getting to the end of it all and knowing putting back what’s left back in the house will be so much better.”(sic)

Fortunately, the star seemed to get away with her undercover filming activities, as she began to film her journey home in the back seat of a car.

The former X Factor star explained she was starting to feel uncomfortable due to her blossoming baby bump.

She revealed: “The warehouse was so far away today…

“I really can’t wait to get us home. I find sitting so uncomfortable now which is a shame because if there’s anything I love to do it’s sit but my ribs just can’t take it anymore.

Fans have been looking forward to new episodes of Stacey’s show airing on the BBC after it debuted in April this year.

A statement on the BBC’s website reveals about the show: “Stacey and her team of organising fanatics can help you to let go of the things you don’t need and streamline what you do. They’ll create ingenious storage solutions and put systems in place to save you time and money in the future.

“Whether you’d like more space for a home office, have a new baby on the way, find it hard to let go of items or just want to create calm amongst the chaos, we’d love to hear from you.”