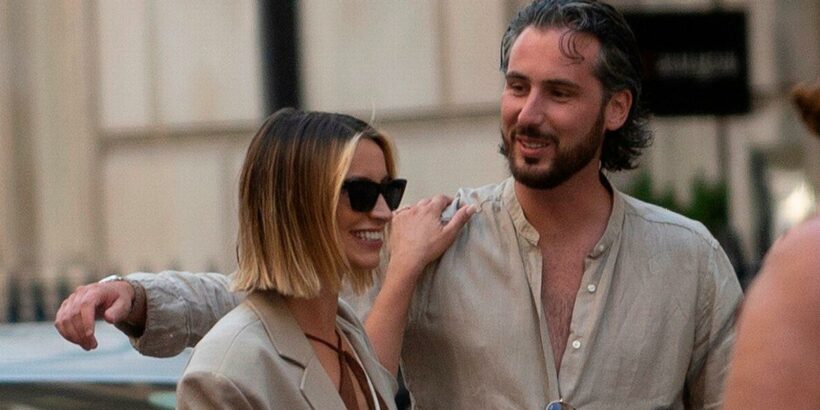 Ferne McCann couldn't have looked happier as she emerged from London's swanky Corinthia Hotel with Ricky Larl over the weekend.

The TOWIE star nailed her look for the outing in a tight, strappy brown halterneck minidress, which she teamed with a stylish blazer and shades.

The 30 year old was seen laughing as she playfully put her hand on Ricky, who is a longtime friend of former Love Island winner Jack Fincham.

Speaking of the pair's day out in the sweltering capital, a source told The Sun: "Ferne and Ricky are just friends. They went for a morning coffee with two of Ferne's female friends there as well."

Fern's outing with Ricky comes after she parted ways with her boyfriend Jack Padgett last month.

A source told new! that she was devastated over the split as she had hoped to give her daughter Sunday a little sister or brother.

"Splitting with Jack will definitely have hit Ferne hard as they seemed so loved-up," revealed a source.

"She's spoken openly about wanting a sibling for Sunday, so it seems like she is feeling broody at the moment. She fears Sunday will never have a sibling.

"She thought she'd found the perfect guy with Jack and pictured a future together, which included marriage and kids. When that fell apart, it did hurt."

Tongues started to wag that Ferne was dating Jack, a model, in December, after the pair were spotted kissing on holiday in South Africa.

In January, she admitted that she was feeling "broody", saying, "Honestly, I'd love to be pregnant."

A month later, she revealed he had moved into the Essex home she shares with Sunday, three, and she thought he was The One.

But in June, it was confirmed the couple had split, with sources telling us Ferne felt that she and Jack were not at the same stage in their lives and that he wasn't prepared to turn his back on his party lifestyle.