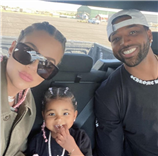 Tristan Thompson does not think highly enough of Khloe Kardashian to remain loyal to her as a boyfriend.

As you may have heard about by now, the guy has cheated on her, like, a million times.

However, Tristan Thompson does apparently think highly enough of Khloe Kardashian to write a few nice words about her on Instagram.

“Happy birthday @khloekardashian,” Thompson wrote over the weekend in honor of Kardashian’s 37th birthday, alongside photos of the two and their daughter True, adding:

“Thank you for being not just an amazing partner, mommy and best friend but also being the kindest, caring and most loving human being I’ve ever met.

“Your love and spirit is contagious to all who’ve met you.

“Thank you for always being there for me and putting our family first. I love you so much. Have an amazing day.”

A very kind message, no one can deny that.

It just comes at a rather ironic time.

One week ago, multiple outlets reported that Khloe had once again broken up with Tristan due to his way-too-curious penis.

The professional basketball cheated on his girlfriend just over three years ago, back when she was pregnant with the couple’s first child.

After Khloe found it in her heart to forgive Tristan, he went out and swapped spit with Jordyn Woods, a close famiily friend of the Kardashians and Jenners.

Even after that unethical act, Khloe still eventually took Thompson back, spending tons of time with him early on during the COVID-19 pandemic and, at some point, deciding to get back together with him completely.

Until, that is, Thompson was once again accused of cheating.

In April, a woman named Sydney Chase described Tristan’s d–k for all the world, claiming that she had slept with Thompson last year — after he had reconciiled with Kardashiian.

Tristan denied these allegations and even threatened to sue Chase… but the damage had reportedly been done.

According to E! News and other sources, Khloe simply had enough of all the embarrassing rumors and speculation and chatter and cut the romantic chord a short while ago.

“They had been working through the cheating rumors for the last couple of weeks, but Khloe told Tristan he lost all of her trust and the relationship could not be repaired,” E! recently explained of what transpired.

“Khloe really tried, but ultimately, felt too betrayed by him. She’s done and says she will not go back.”

But Tristan appears to be enjoying his newfound freedom at the moment, that much is for sure.

“Tristan was hanging out with Drake, Diddy and Chris Brown the majority of the night,” E! reported about the alleged outing.

“He was seen hanging out with several girls on the upstairs deck and then went into a private room with three girls.

“He seemed like he was in a great mood and wanted to party.

“He was drinking and was partying into the early hours of the morning.”

It’s almost as if Tristan is psyched to be single again, huh?

“Tristan will always be True’s dad, and he’s a good father to her, but he’ll never be a good partner to Khloe,” another source previously told In Touch Weekly.

“She still held out hope so this is yet another wake up call, hopefully the last.

“Khloe will move on, but it’s bittersweet and heartbreaking.”