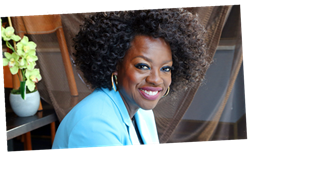 In this instance, the actress isn’t speaking about herself and her own history of being honored — including an Oscar win, alongside countless statuettes collected from other awards ceremonies — but about the late Chadwick Boseman. The two co-starred together in Ma Rainey’s Black Bottom, for which he is finally getting his awards season flowers, albeit posthumously. (Boseman died in 2020 at age 43.)

“Chadwick Boseman deserves it,” Davis says, speaking to ET’s Nischelle Turner by Zoom. “This is someone who did the work, who learned the trumpet. I mean, those long three, four-page monologues, are you kidding me? He did the work, and he did an extraordinary job.”

Adapted from August Wilson’s stage show of the same name, the film stars Davis as the Mother of the Blues and Boseman as an ambitious but hot-headed member of her hired band. Over the course of one recording session, tensions come to a head and each ensemble member gets the opportunity to deliver one of those go-for-broke, leave-it-all-on-stage monologues actors dream of.

In the ensuing accolading of his work, Boseman has made history, becoming the first actor to earn four SAG nominations in a single year. (He is nominated for Best Actor for Ma Rainey and Best Supporting Actor for Da 5 Bloods, as well as Outstanding Cast in a Motion Picture nominations as part of both film’s ensembles.) That is in addition to recognition from the Film Independent Spirit Awards, Golden Globes, Gotham Awards and National Board of Review, among others.

“Chadwick was absolutely someone who felt like he was walking through the world with a halo around him. He really was,” Davis reflects. “He was one in a trillion, gazillion. He was someone who was about uber integrity, uber authenticity, and absolutely living life on his own terms.” That he is gone so soon is a tragedy, but that tragedy should not overshadow what he did with his life. “There is something in me — which makes me very emotional now — that believes that somehow he was ready.”

Davis, meanwhile, is being recognized at those same shows for her performance in Ma Rainey, and let it be known: It is deserved. She underwent the physical transformation to become Ma, she acted her way through those page-long monologues. She did the work. And cliché as it may sound, for Davis, it is an honor just to be nominated. “I’m in a profession that has a 95 percent unemployment rate. Point zero four percent of actors are famous,” she explains. “So, when an actor says, ‘I feel grateful to be nominated,’ you’re absolutely right. It’s miraculous — it really is — that I’ve gotten this far and getting these award nominations is proof positive.” 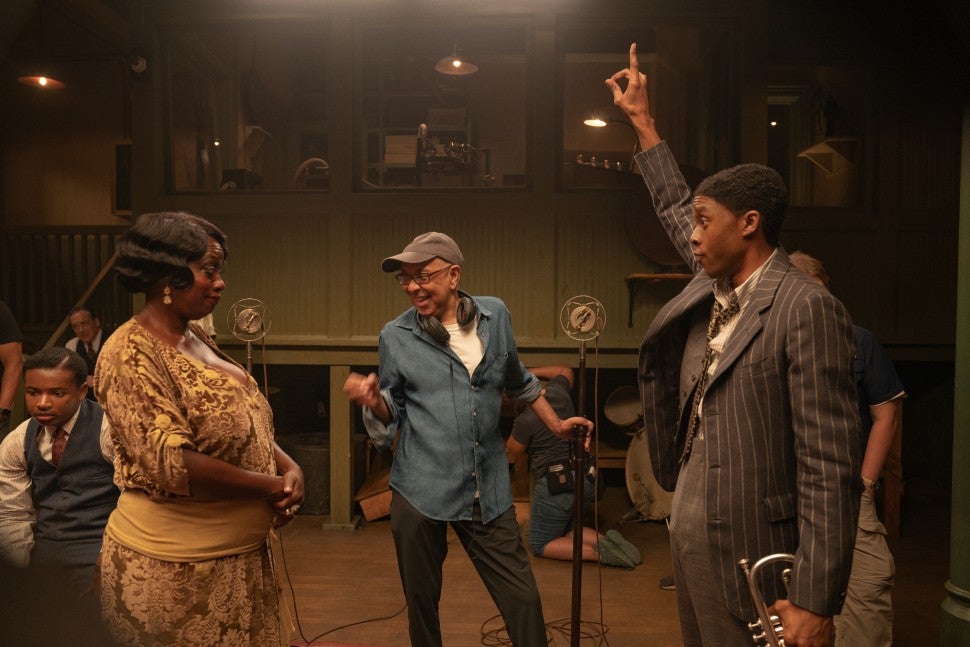 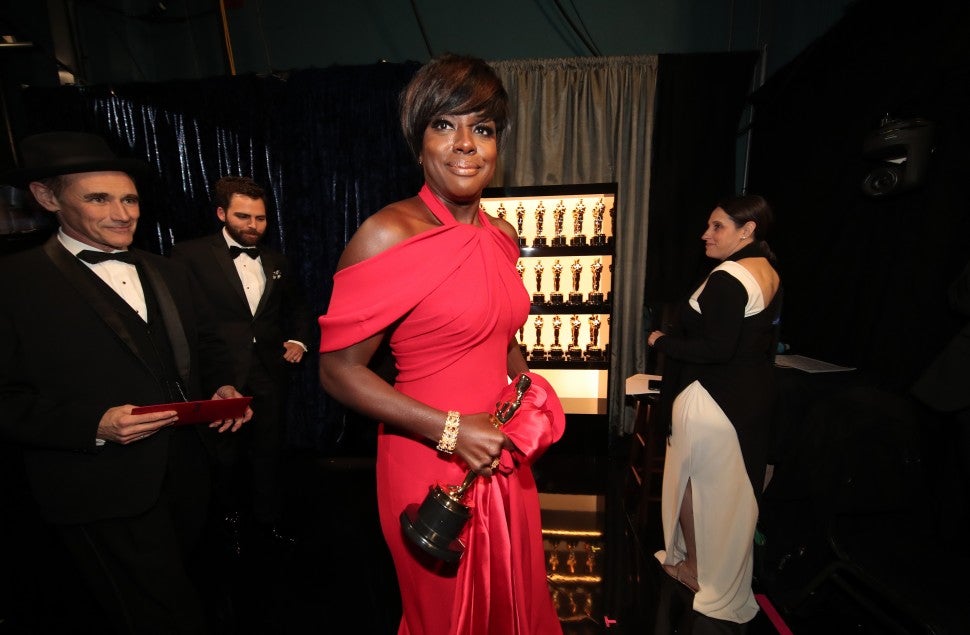 Which isn’t to say the gauntlet of ceremonies and requisite campaigning around awards season has gotten any more comfortable for her, not even after winning her Oscar in 2017 for another August Wilson adaptation, Fences. “I’m always a person who’s funky during award season,” she says.

“I’m always sort of trying to reconcile it, because there is no best,” Davis explains. She finds the worth in the process itself, in determining what each project means to her based on the people she’s with and the work she’s done and not by what awards may or may not follow. All that, she reasons, is subjective after all.

And still, it does mean something to be recognized in this way, especially for a role like Ma, for who she was and what she represents. Gertrude “Ma Rainey” Pridgett was a Black woman who refused to let society’s prejudices decide who she was or determine her worth, a revolutionary self-determination in her time that contributes to her enduring iconhood. It’s a struggle Davis is familiar with, these many decades later, of having to stand in her womanhood and stand in her Blackness each and every day to demand her worth as an actor, as a producer, as a person.

“There are not enough fingers and toes to explain how much I have to fight,” she says. “I think the biggest fight is fighting for certain stories to be told. It’s this thing that somehow people can’t see Blackness in a certain narrative. They can see Black woman as mothers, as confidants, as best friends, but when you get into sexuality and you get into any number of the complexities of what makes us women, then you get into this nebulous terrain where they just don’t see it.”

“And it’s not just white people that don’t see it, we don’t see it,” Davis stresses. “That right there is the most emotional fight, because then it becomes a reflection of how you see me as a woman. And it’s different for our white counterparts — and I celebrate them. I’m not saying this to be hypercritical — but it’s very, very different for white woman and white actresses. There’s more of an expansive way that they are seen. That’s the biggest fight.”

So, what now? That’s what Davis sees as the biggest question. How do we move forward with this past year of reckoning? How do we make it so that everyone can have a seat at the table? How do we continue to have these uncomfortable conversations, and how do we have them without placing the burden of diversity and inclusivity on the very people fighting for it? “You don’t have them at award shows. No one wants to hear that,” Davis laughs. “I have tried it, trust me.”

Those speeches may come, however, at any number of telecasts leading up to the Oscars. Take, for one, the Palm Springs International Film Awards, where Davis is this year’s recipient of their Desert Palm Achievement Award. The ceremony is not having an in-person event, but Davis’ acceptance speech would pay thanks to August Wilson, above all, for his legacy and the legacy he created for Black people.

“The late, the great, the still great, the still here August Wilson,” Davis recites. “He has given me, Viola — dark-skinned, Black actress, 55 [now], 30 when I did Seven Guitars, 23 when I did Joe Turner’s Come and Gone — he’s given me characters that I can see myself in, where I did not have to hide my Blackness. Without the material, it’s hard to shine. I’m just very grateful for everything that has happened in my career thus far, that I have actually achieved something. Sometimes you don’t see your career in that perspective. You’re still the little girl, hoping and praying.”

Davis will next star as former FLOTUS Michelle Obama in the Showtime series, The First Lady, alongside Michelle Pfeiffer’s Betty Ford and Gillian Anderson’s Eleanor Roosevelt. When Davis began her research last year, it helped that she knew Obama and could reach out to talk to her personally, along with reading her book and watching her documentary.

“Now I am in the place of a little bit of fear– well, I’m not going to lie, a lot of fear,” she grins. “Let me tell you something, she’s dope. She’s everything. She’s a hero. She is just one of those women and people that lives a life bigger than herself, and I hope to honor that.”

Like Ma, this is a chance for Davis to completely transform as she is becoming Michelle Obama. “I do makeup tests at my house with my makeup artist, and they are doing an extraordinary job with the transformation of it all,” the actress teases. “Here’s the thing, when I saw Miss [Cicely] Tyson for the first time when I was seven years old, watching people like Meryl Streep, I always wanted to transform as an artist. I haven’t gotten a lot of opportunities to do that, but this is one of those opportunities. And I am looking forward to it with a lot of fear, but I am looking forward to it.”

The Palm Springs International Film Awards will not take place as an in-person event this year, but ET will be exclusively sitting down with the winners and honoring the honorees on Entertainment Tonight on Feb. 25.