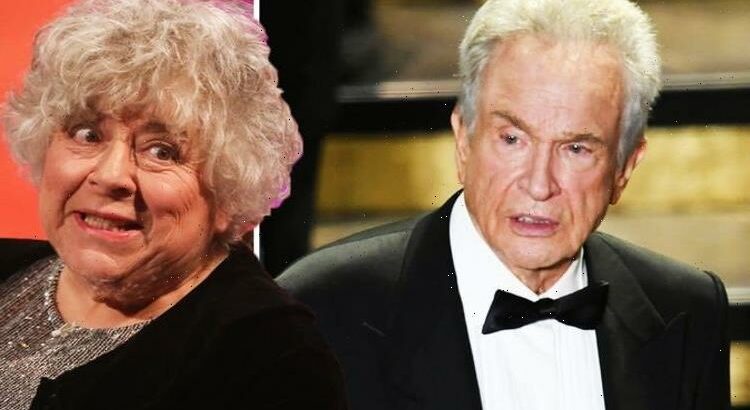 Miriam Margolyes tells Phillip Schofield she thought he was gay

Actress Miriam Margolyes, 80, has revealed she “mooned” Hollywood A-Lister Warren Beatty over his treatment of American actress Diane Keaton. The Harry Potter actress, who played Professor Sprout in the hit series, spent time in Los Angeles in the 1980’s, auditioning for a small part in the film, which was directed and written by the Hollywood star, despite the majority of the movie being filmed in the UK.

Addressing her bizarre first encounter with the star, Miriam told how over the course of their working relationship, she had once “mooned” at him, which she attributes to his treatment of The First Wives Club actress Diane Keaton, 75.

She said: “I mooned at him once and the expression of shocked surprise frozen on his face still tickles me even now, but he completely deserved it.

“Mooning is a powerful tool; a bottom is not threatening; it’s rude, amusing but unmistakable.”

The actress explained that she had performed the “amusing” act after watching Warren make Diane – who played Louise Bryant in the film – reshoot a scene multiple times over.

“I can’t remember why I did it, but probably because he made Diane Keaton do 50 takes of a shot she did perfectly well first time,” Miriam continued.

The star claimed that the Annie Hall actress had turned down a proposal from Warren, which prompted him to “take it out” on his co-star.

Miriam claims: “Diane had refused his marriage proposal and he took it out on her.

“She was completely delightful, totally without grandeur. One of my top ‘faves’,” she divulged. (sic)

Miriam’s anecdote of “mooning” the Hollywood actor comes after she spoke at length about how he propositioned her, asking on their first meeting, “do you f***?”

After entering his trailer to audition for a role of the secretary in his film Reds, Miriam revealed that he quickly asked the unprofessional question.

The star told how she quickly shot him down, after revealing that she is a lesbian, reported the Daily Mail.

After recalling how the star inappropriately asked if he could “watch”, Miriam told him: “‘Pull yourself together and get on with the interview.”

However, her no-nonsense approach worked, and she landed herself the role in the 1981 film.

The star went on to say in excerpts of her new book This Much Is True, that she “never thought of trying to make it in America”, explaining that she felt it “out of her reach”.

Miriam explained that she was “probably the fattest” person her American agent, who represented what was considered a “different” and “interesting” array of actors at the time, had in her books.

The star went on to work on Lawrence Kasdan’s 1990 dark comedy film I Love You To Death, alongside River Phoenix and Kevin Kline.

Elsewhere in her memoir, the star detailed her royal run-in with Princess Margaret which almost went awry while working on a stage production.

After one performance of She Stoops to Conquer, during which she played Mrs Hardcastle, Miriam explained how Princess Margaret came backstage to greet the cast.

However, the actress recalled almost putting her foot in it when she mentioned one of their mutual friends, Carl Toms, who was unwell.

After asking the royal to pass on her best wishes, Miriam said of Margaret: “For a split second, her eyes narrowed and she stiffened. She was deciding whether I had been guilty of massive impertinence.”

However, thankfully everything worked out okay for the Romeo + Juliet actress.

This Much Is True is released on September 16 and available to buy here for £16.15.