Changing fuels Jesse Rutherford. He can't get enough of it — so much so that he loves Mondays. (Cringe.) "They're a fresh start, every fucking time," he tells Allure over the phone, in the most cheerful tone a rockstar born and raised in California could possibly have. "It's awesome."

Rutherford can date his fixation with changing back to age five. "I dressed myself," he recalls. "But I would have four 'fits a day, all the time. I was never not changing my clothes, not changing my hair."

Over nearly a decade in the music industry with The Neighbourhood, Rutherford has turned changing into the crux of his career. Even at the risk of sounding like an old lady, I will say I remember when all of The Neighbourhood's music videos were in black and white and took over Tumblr in GIF form with Rutherford as their leather-clad frontman with a devil-may-care grin. At one point, half of his dark-chocolate hair was bleached. At another, he smeared glitter on his cheeks before Euphoria even existed. "I've done things along the way, just to do them first. I'm not afraid to do that," Rutherford says before taking it back. "That's a lie. I am afraid — but not enough for it to stop me."

Now, the band is lead by a beaming silver man, and its music is the soundtrack to TikToks. The silver man is none other than Chip Chrome, a silent, glitzy, guitar-playing character complete with his own merch — including, but not limited to, sweatshirts and pinball machines — an album title (Chip Chrome & the Mono-tones), and most recently, a star-studded music video appearance for The Neighbourhood's new song "Stargazing." Chip Chrome is Rutherford's alter ego in all senses of the world. Pulling from his lifelong obsession with evolving aesthetics, he reinvented himself to bring The Neighbourhood into a new generation (Z, in particular). 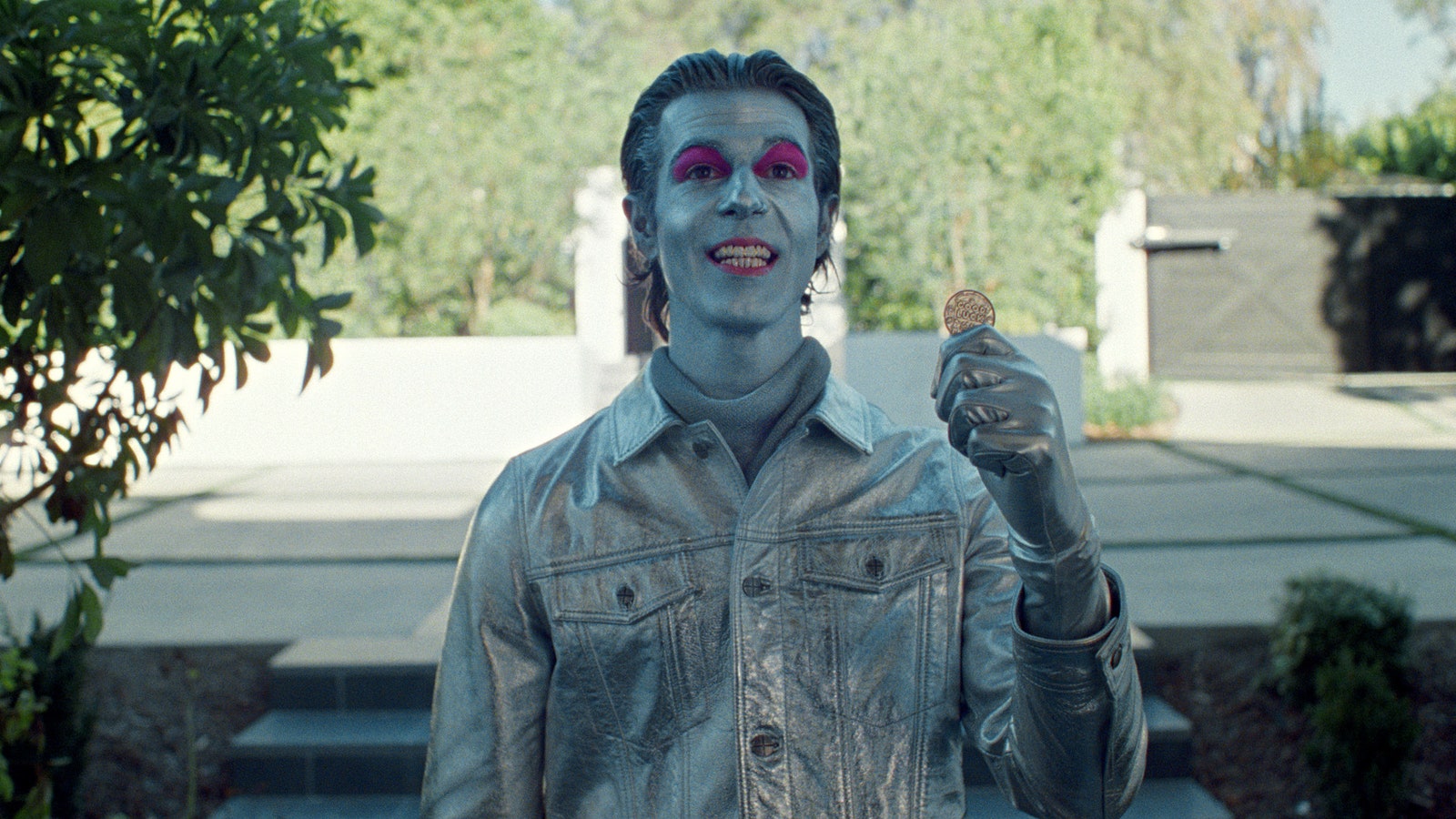 Why commit to Chip Chrome as a full-body, head-to-toe experience, though? Rutherford could have assumed a new identity merely through ditching the leather and denim in favor of a new wardrobe. He could have dyed his hair neon green and adorned his face with floral face paint. But none of that would have been enough to obscure his trademark look. "I already gave myself a permanent head-to-toe experience with all my tattoos," he quips.

In sixth grade, Rutherford discovered the glory of Travis Barker, and a young Jesse immediately ran to his mother to warn her that one day, he'd be covered in body art like Barker, and — to her chagrin — he was going to give himself a mohawk upstairs in his bathroom. At 16, Rutherford followed through and started decorating every inch of his skin (barring from his face) with ink.

"I already gave myself a permanent head-to-toe experience with all my tattoos."

By the time he was 20, tattoos became so much of Rutherford's identity that The Neighbourhood's music video for "Afraid" features the lead singer with his body covered in only them. But as time went on, he felt overexposed and wanted to part with his tattoos without removing them. "The outer version of me had been worn down enough and given away to people," Rutherford shares. "People had their interpretations of me — even myself, I had this interpretation of what I wanted to be, thus the tattoos and all that." 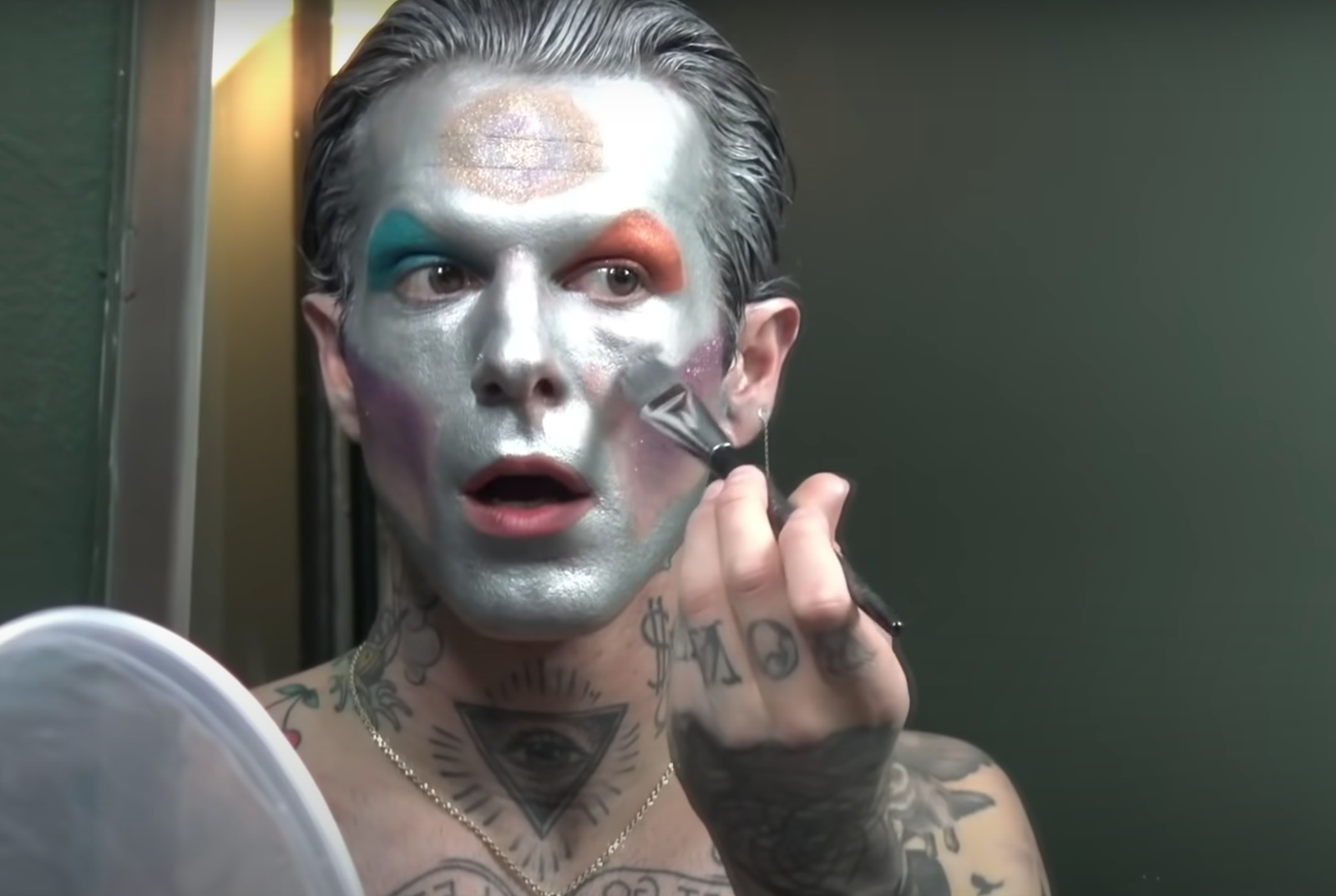 In 2019, drenching every area of exposed skin in silver paint became Rutherford's way to escape perceptions of him by presenting himself to the public with a clean — albeit shiny — slate. Chip Chrome has "no connection to my past visual identity," he says. "This is my way to kind of have a shield up."

But why silver? Chrome could be any color with a metallic finish. For Rutherford, silver was the only option for Chip. Over the past year, Rutherford has noticed the color choice has a more metaphorical meaning than the character's last name, though.

"Chip has helped me tap into a part of myself that I hadn't seen for a while."

Recasting himself as Chip Chrome was a silver lining for Rutherford's psyche — a conclusion he says he came to after writing, well, "Silver Lining." For the first time in years, Rutherford was having fun again while learning to play the guitar, experimenting with vibrant eye makeup, and crafting the intricacies of Chip. Once more, Rutherford felt comfortable presenting himself to the world's prying eyes. "This project has shown me a lot with trusting myself, trusting my vision," Rutherford says. "Chip has helped me tap into a part of myself that I hadn't seen for a while. Now… it feels so corny saying this, but I feel more like a rock star when I want to be."

Having the support of his bandmates, whom Rutherford stresses are his close friends, made the switch from Jesse Rutherford to Chip Chrome in their work together seamless. "I've been showing up in wacky outfits and hairstyles and makeup since they've known me," he admits. "This is just kind of a more extreme iteration." 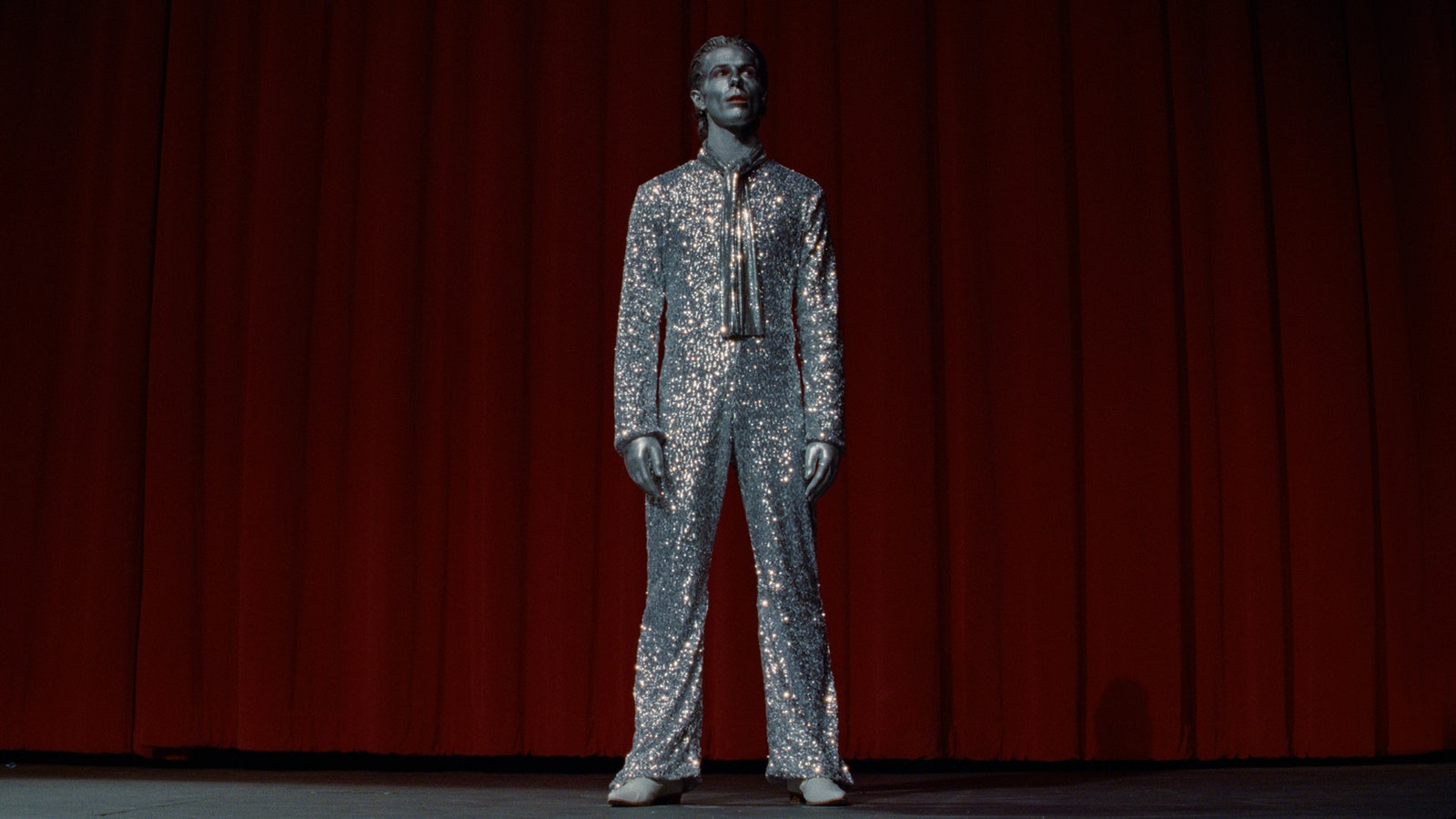 Rutherford's mom wasn't too surprised by Chip Chrome, either. Mohawk and tattoos aside, Rutherford recalls getting sent home from school in fourth grade for painting his nails "and other stupid shit that you should not get sent home from school for." Although he was a self-described "pretty good" kid, Rutherford thrived on being in control of who he wanted to be. His attitude growing up could be described as, "Let me drive the fucking car. Let me be behind the wheel of who I am," he says. "And my mom was always super open to [it], and let me dress however I want to."

In fact, the first time he painted himself with Mehron's CreamBlend Stick, Rutherford was reminded of his teenage years. As he coated his skin in the shiny hue, he was transported back to living at his mom's and sensing the freedom she once offered him all over again. Rutherford felt like he was taking up drawing again, one of his favorite childhood hobbies. "I've always moved fast and rushed to the next thing," Rutherford muses. "When I was younger, my mom used to try to get me to draw to help me calm the fuck down for a second, just chill, and concentrate on something other than getting up and going."

Rutherford soon realized becoming Chip Chrome helped him feel more prepared to take the stage, and the metamorphosis is now meditative practice for him — one he wishes to hold onto, even after he stops being Chip. As Rutherford silver-izes himself and blends eye shadow onto his lids (specifically with his ring finger), "the world kind of stops for a second," and he feels completely immersed in his art and creativity at the most physical level, he says.

These days, makeup artist Sydney Szramowski aids Rutherford in his transformation, sweeping on rainbow gradients of pigments on his lids or asymmetrically color-blocked hues that contrast the polished hue that covers his body. But the magic of the process still moves him.

"Anything I'm doing, it's just because I want to do it, and I am down for whatever anybody else wants to do, so that's kind of why I do what I do."

The final product may be a man in makeup, but Rutherford doesn't want to fit the typical expectations and praises of such. Rather, he's more of an alien in makeup than anything else. "I'm not trying to be sexy or beautiful or anything like that with it," Rutherford declares. "It's hard to even call it beauty. I know makeup fits in the category of beauty, but I'm not really trying to do something beautiful. I'm just trying to do something creative."

The singer is hardly defensive or pretentious with these claims, though. Instead, they encapsulate his passion for art and self-expression. Makeup, Rutherford believes, should be as broadly and abstractly approached without gender roles attached. He hopes his use of makeup can exemplify the non-permanent, boundary-less ways to explore our identities — no matter who we are.

"I mean, I'm a straight, white guy, plain and simple," Rutherford asserts. "Anything I'm doing, it's just because I want to do it, and I am down for whatever anybody else wants to do, so that's kind of why I do what I do." 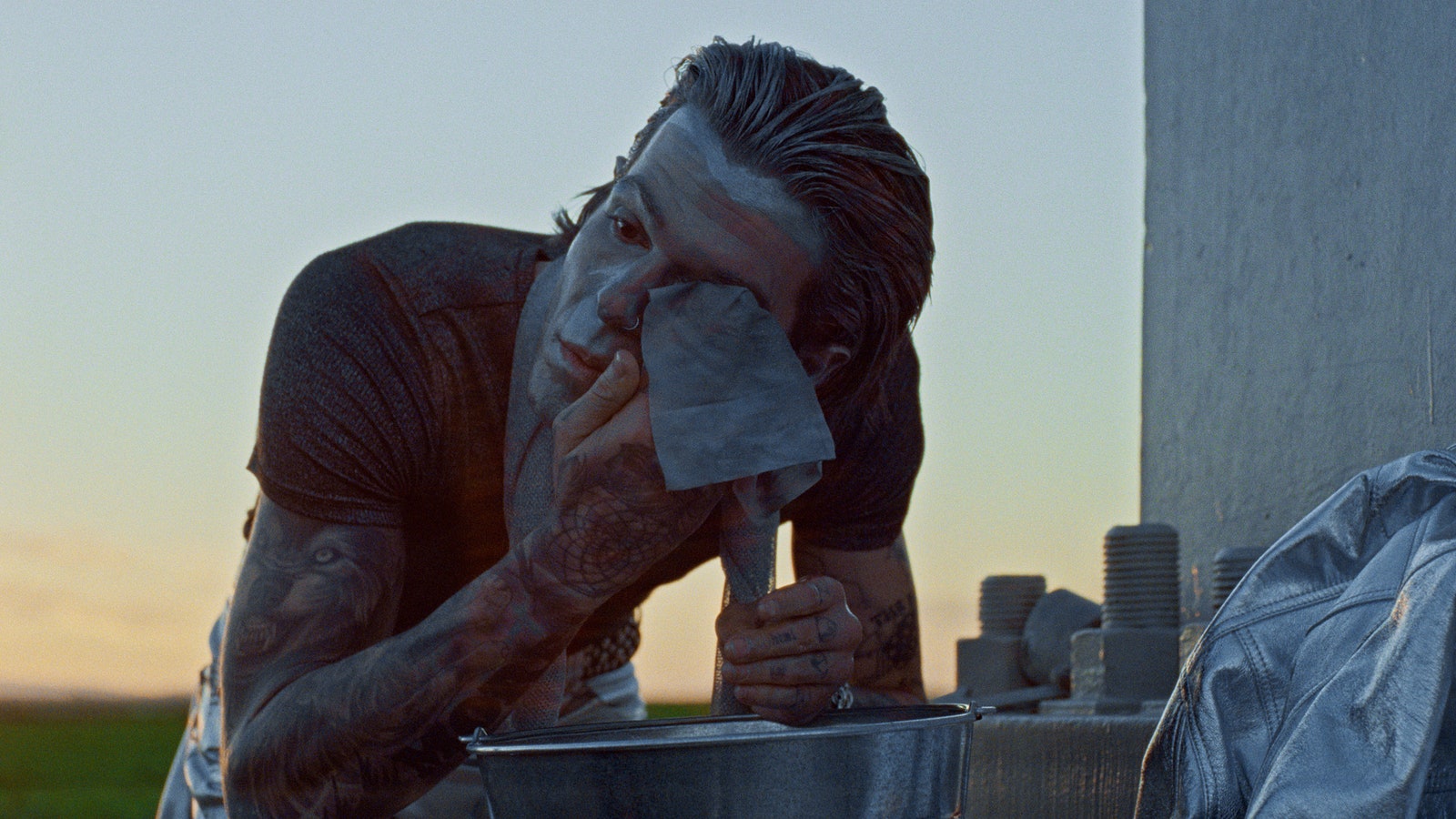 Taking off his silver shield is not as arduous as you may imagine it would be, Rutherford swears. Because it's water-based, the pigment quickly sweeps away with his makeup remover of choice: the Sephora Collection's Cucumber Cleansing Wipes. In fact, he can return to his pure Jesse form in four minutes flat, if needed.

However, Rutherford laments just how easily the paint comes off. "It's not chill when you want to keep it on," he points out. "It starts getting pretty shitty pretty quick. I have a very expansive forehead, so I'm wrinkled up there. The paint's just constantly cracking. It's the worst."

Surprisingly, the paint clogging up his pores isn't a complaint Rutherford shares. "It's funny. I've been noticing a lot of comments being like, 'Baby, this can't be good for your pores,'" he says. "Luckily, my skin is pretty solid."

His clear complexion can't exactly be owed to an extensive skin-care routine, though. Rutherford credits a cleanser his girlfriend Devon Lee Carlson — you may have heard of her — gave to him: the Fresh Soy Face Cleanser. His review: "It's really rejuvenating," he says. "It doesn't even feel like it is soap. It's like Gatorade for your face."

Carlson also passed along his go-to moisturizer at the moment from Laura Mercier. That's about it. "I'll do a face mask every once in a while," Rutherford adds. "But for the most part, I shave. I have to every time I do Chip. That's full-commit exfoliation." 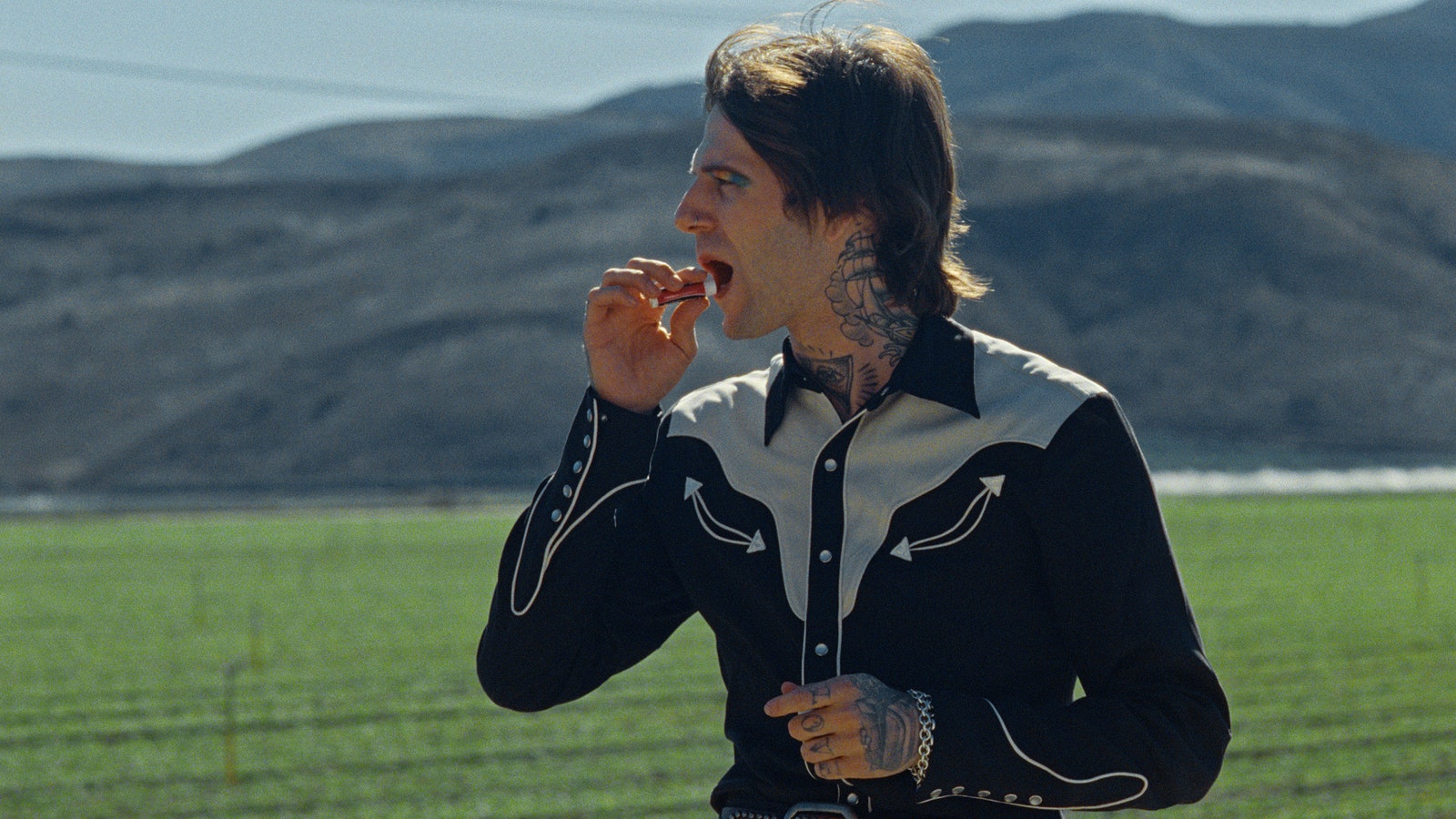 "I think I don't want to be painting myself for the rest of my life," Rutherford admits. In "Stargazing," we even see Rutherford becoming more comfortable with being the Jesse we all knew and loved him for back in the Tumblr days again — but with a Chip twist. In certain scenes, you can catch his tattoos on full display, free of silver paint. However, his lids are rainbow. "This project has taught me to dig in more with what I have, appreciate what I have, appreciate who I am, and accentuate those good parts when necessary, when it needs to be loud," he adds.

With the outfits he slips on in his free time and his newfound fascination with makeup, Chip has "seeped into my life," Rutherford reveals. "When I move on from Chip, I still want to be able to carry some of the confidence Chip has given me in the right places, with the music. That's where I want the confidence. I don't care if I'm taking pictures of selfies of myself, and people are liking them on Instagram. I'm not really interested in that. I'm interested in presenting myself for the art with the art. If recognition comes along with that, fuck yeah. That's exciting."

All products featured on Allure are independently selected by our editors. However, when you buy something through our retail links, we may earn an affiliate commission.