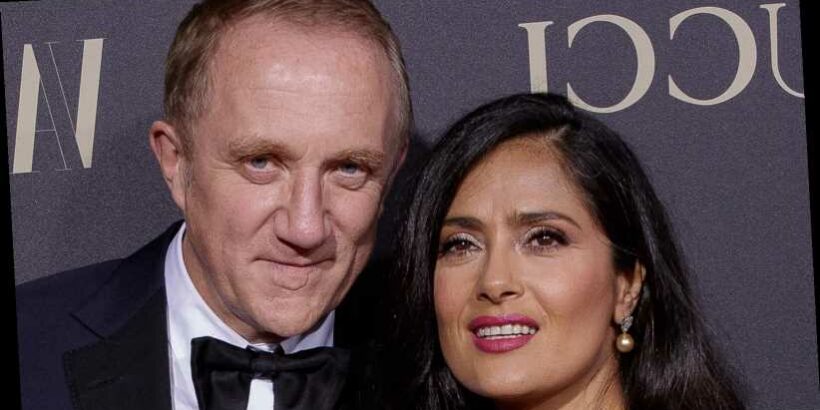 When Salma Hayek married French billionaire François-Henri Pinault in 2009, rumors immediately began swirling that the sexy celebrity was securing her retirement with The Kering CEO, who the Daily Mail has reported to have an estimated net worth of $33.2 billion.

After celebrating their 12th anniversary on Valentine’s Day, the Frida actress joined Dax Shepherd on his Armchair Expert podcast to officially put those rumors to rest, telling the world, “Fifteen years together, and we are strong in love.”

Shepherd broached the delicate topic, admitting that he too was confused about the pair when they first got together explaining, “I was like, ‘Oh, okay, she married a rich guy, maybe that’s why she married him, I don’t know.'” Adding, “I meet him and I’m like, this guy is so foxy — oh my God, the confidence, his eyes, he’s so good-looking and charming and I was like, ‘Oh, this motherf–ker could’ve been broke. He’s a bombshell'” (via Armchair Expert). The 54-year-old Hayek wasn’t shy in defending her relationship, telling Shepherd, “When I married him, everybody said, ‘Oh, it’s an arranged marriage, she married him for the money.’ I’m like, ‘Yeah, whatever, b****. Think what you want.'”

She went on to agree with Shepherd and endearingly revealed, “You know the thing is that in pictures you cannot begin to guess the magic in him.” Candidly sharing, “He’s made me become a much better person, and grow in such a good, healthy way.”

Salma Hayek strongly believes, through her own experience, that there is a sort of discrimination or misconception regarding extremely wealthy men being unable to give or experience honest love. She explained, “Immediately you think because somebody’s rich, [they] might not be a good person. Might be somebody materialistic, might be somebody that doesn’t have values, might be somebody that is even stupid or that doesn’t deserve it.” Even going so far as to say, “In order to have a lot of money, you did it the wrong way, there is all this preconception.”

The Oscar winner/producer even admitted that she had a similar notion upon first meeting her now husband. “And I had that by the way. It was the last thing I wanted — it was not my type at all. And I came in with the preconceptions and he [melted] them all away.”

While it certainly sounds like Hayek and Pinault have found love and happiness, the “Woe is me, I’m really rich and people think the worst of me before getting to know me” argument is a little hard to swallow. With a net worth estimated at $200 million herself (per Celebrity Net Worth), Hayek is traveling in circles and living a luxury most of us can only imagine. And while money can’t buy true love, it’s more than likely Pinault with no money would have had a much harder time getting to know and eventually marrying Salma Hayek than Pinault with money did.